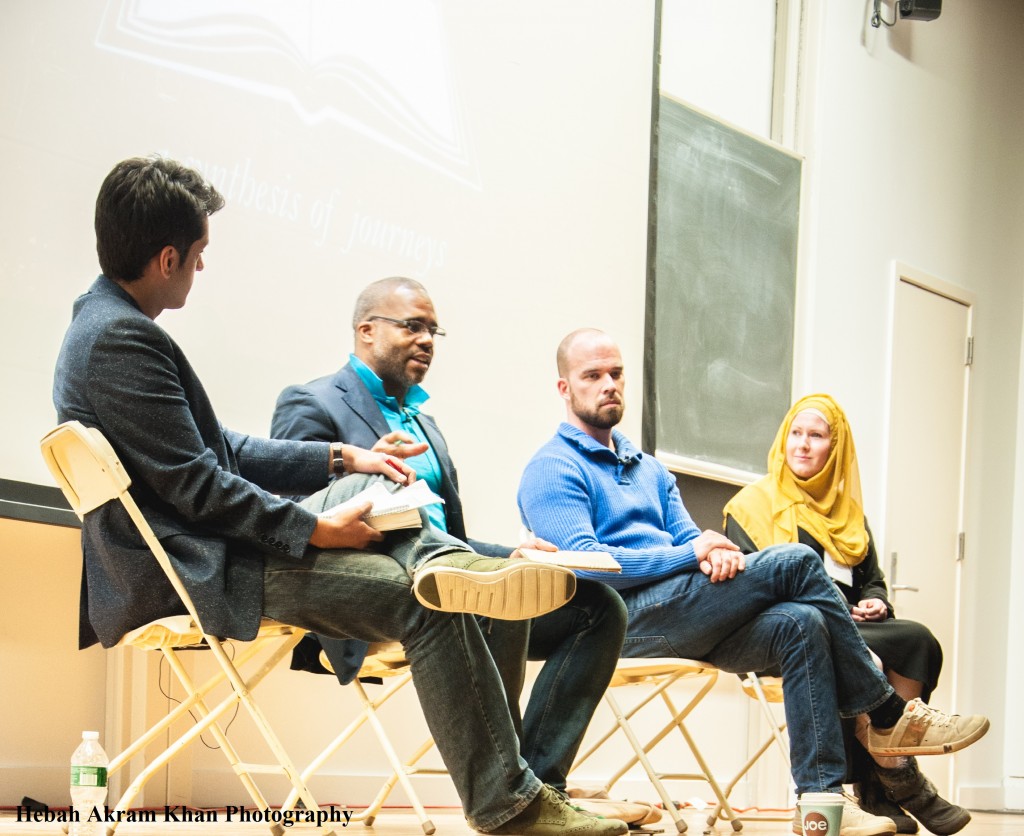 A synthesis of journeys at Columbia University

Recently, I had the pleasure of serving on the planning committee for the 2nd annual ‘Muslim Protagonist Writers’ Symposium’ at Columbia University in New York. The culmination of the efforts of the speakers, students and many others, late nights spent planning the details in empty classrooms and constant email threads — it was truly more than the sum of its parts. The second Muslim Protagonist remained true to its roots as a response to the void minority students felt in mainstream literature and media, and brought together a diverse group of artists, writers and academics under the banner of a synthesis of journeys. The Muslim Protagonist 2014 delved deeper into the issue of the minority narrative, asking what we can learn from the diverse immigrant narratives of today in America, and what we know from the emergent Muslim and minority narratives already taking form.

The conference began with co-chairs Haris Durrani and Mariam Elnozahy reflecting on their personal experiences growing up as Muslim Americans. Haris Durrani credited science fiction for helping him understand “the rapidly changing world around [him], of what it meant to be a Dominican Pakistani Muslim in post-9/11 America, even though few of these topics were explicitly broached in the books I grew to love.” As a marginalized genre, the discussion of science fiction was extremely relevant to the discussion of marginalized narratives that proved to be a focal point throughout the day.

The first seminar began with the keynote speaker Wajahat Ali managing the almost Herculean task of making the audience laugh at 9:30 in the morning. Featuring NYU professor Haroon Moghul and Sahar Ullah, co-founder of the Hijabi Monologues, the “Sufism and Storytelling” panel explored classical and post-classical Arabo-Islamic literature. Haroon Moghul compared Iqbal’s work to that of writers today, tracking a common spirit through the ages. “Iqbal’s poetry was a way for him to come to terms with his identity,” he said, adding that art occupies the unique position of being something that is simultaneously therapeutic and can also take on the feel of a weapon. Building on Moghul’s remarks about the liberating quality of art, Sahar Ullah discussed the boundaries in which artists often enclose themselves, citing the boundaries she sees in the submissions she receives for the Hijabi Monologues. Whereas historical writers such as Ibn Tufayl were considered scholars and, consequently, did not shy away from critiquing other scholars, modern writers do not give themselves the same liberty, she noted.

Next, H.M. Naqvi, acclaimed writer of ‘Homeboy’, in an exclusive video shot for the event, talked about his experience as a Pakistani Muslim novelist. Naqvi explained how he used humor as a tool he used to lend resonance to his desire to present his culture in a “substantive and a meaningful way” in his novel. Filmmakers Nsenga Knight, Alex Rivera and writer and filmmaker, Sofia Quintero extended this conversation to America, examining representations of minority groups in the media in their panel “American and ‘Othered’?”  They addressed representation and non-representation as it relates to literature, film, and the visual arts across various minority groups. “Readers should cross over not writers,” said Quintero in relation to the pressure minority writers feel to translate their experiences for the mainstream. “You’re not well read until you read about people who are not exactly like you,” Quintero added in one of the most insightful comments of the day. The panelists urged artists to resist the urge to place uninformed audiences front and center. They also took the opportunity to address mainstream contradictions when it comes to minority communities when a panelist mentioned the irony of first wall between Mexico and the US being built in 1994, the same year that the government was encouraging global trade. The contradiction between bringing the international community while simultaneously attempting to physically keep it out seemed exemplary of the mainstream’s ‘pick and choose’ treatment of minority communities.

After the break, Mira Nair, the director of “The Reluctant Fundamentalist” and “Salaam Bombay!”, talked about the obsessive nature of filmmaking, her desire to “not [pander] about my country to this country which did not know about its cultural richness” in her films and the Otherizing her family faced in the events following 9/11, in her exclusive video. Nair affirmed her commitment to telling stories that will help dispel hate speech and start honest conversations.

The Science Fiction, Fantasy and Social Power of Imagination panel was up next. Writer Ibrahim Abdul-Matin moderated a conversation between writers G. Willow Wilson and Saladin Ahmed and filmmaker Alex Rivera. The panelists explored how science fiction can be used to challenge mainstream narratives about Muslims, Arabs, Latinos, African-Americans and other minorities, and to forge narratives of our own. One of the most memorable parts of the conversations was “Ms. Marvel” (the hugely popular comic series which tells the story of 16-year-old Muslim superhero Kamala Khan) writer G. Willow Wilson’s comment about the dangers of dressing xenophobic comments as concern.

Now we’re here: brown-skin is mainstreaming on television, there’s a Marvel hero that looks like me… Muslims rocked the vote this November for NYC
The American Muslim Protagonist panel followed with award-winning playwright Wajahat Ali and Yale professor Zareena Grewal tackling the vexing issue of perceptions about the Muslim American identity. Being Muslim and American is often presented as paradoxical by those who see Islam and America as mutually exclusive and Ali and Grewal sought to dispel these false ideas. Zareena Grewal recalled the incredibly popular Halal McNuggets sold in her hometown of Dearborn, Connecticut and the “I ♡ Islam” bumper stickers that decorated cars. “What could be more American than I ♡ bumper stickers?” questioned Grewal as she criticized the imaginary geographic lines that are so often drawn between Islam and America. “These aren’t intellectual questions, they are real life questions,” she said as Wajahat Ali recalled his post-9/11 college days at University of California: Berkeley. Ali recalled the tension students felt after the tragic events of that day and how they tried to find their identity by emulating the cultural practices of Muslim majority countries that were foreign to their American upbringing. He compared the process to “skin grafting” an identity over your own and expressed sadness at the fact that marginalization had forced these students into a position where they no longer felt comfortable in their own skins.

The closing panel entitled “A Synthesis of Journeys” tied together all the events of the symposium as G. Willow Wilson, Ibrahim Abdul-Matin, Wajahat Ali and writer Michael Muhammad Knight “synthesized” the three journeys of the art of the classical history of storytelling, the experience of minority groups in the US and the role of science fiction as an engine for social empowerment to assess the idea of the American Muslim/Mus­lim American protagonist through literature and art.

“We wanted to create a space which certainly is critical of stereotyped narratives, but remains open to the diversity of journeys and identities out there for Muslim and other minorities — in which everyone has the courage to go out there and write their own stories,” said co-chair Haris Durrani about the motivations behind the enormously successful event (attended by almost 400 people, many of whom specifically traveled to New York for it). The symposium also marked the launch of a monthly online magazine, Protag, true to its commitment to highlight and share marginalized narratives.

“The Muslim Protagonist: A Synthesis of Journeys” started a crucial discussion about minority narratives in the same way as we at The Missing Slate highlight global voices. These movements make me optimistic about the future of humanity, an optimism that is often threatened by the hate speech found in comment sections across the internet. That we are in a moment now that minorities can speak about their experiences instead of being spoken for, dismissed, represented as caricatures and/or villains in movies and Orientalized or criminalized is indeed cause for celebration. As Columbia alumnus and co-founder of the symposium Mirzya Syed noted in her closing speech, “Now we’re here: brown skin is mainstreaming on television, there’s a Marvel hero that looks like me, Caucasian girls will grow up to name their sons Zayn, albeit with a Y, Muslims rocked the vote this November for NYC, and we learned that the American Muslim consumer market is $170 billion dollars strong… we as a community have underestimated ourselves for far too long. That when our parents came home after awkward Islamophobic exchanges at work, or when our younger siblings were taunted at school as part of a New Normal that was initiated when they were babies… we may have believed that things never will get better.”

Sauleha Kamal is a Contributing Editor for the magazine.