A loose adaptation of Louis Malle’s Le Feu Follet (1963), in which the protagonist Alain Leroy was characterised by what Joachim Trier calls “self-destructive integrity”, the talented Danish (distant relation to everyone’s favourite provocateur) director’s sophomore film nonetheless shares plenty with Reprise (2008), his promising if somewhat indulgent debut. Returning are the privileged, literate bohemians drifting restlessly through an Oslo saturated with ennui, their existential and creative struggles framed by a crisp, chill, unostentatious mise en scène and experiments with audiovisual juxtaposition. This time Trier sacrifices the temporal and perspectival acrobatics for something quieter and sharper though; a sensitive account of the last day in the life of a recovering addict, newly emerged from a long stint in rehab. 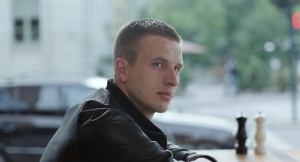 Anders’ (Anders Danielsen Lie) 34 years on this earth might be belied by his fragile baby-face and slight frame, were it not for the deflated gait, resigned gaze and cracked smile. He’s a failed writer, a failed boyfriend, a failed most things; all of his promise was wasted long before the movie began. He’s a dead man walking (he tests the Woolf-ian waters early on, quite literally), and wanders zombie-like through Oslo not so much in search of a reason to stay, but to say goodbye. He visits his old haunts, meets up with a few friends, tries to reach an old flame and estranged sister, both of whom probably know all too well where this is ending up. If the usual addiction arc has its junkie clinging on for dear life before taking the final, fateful plunge, Oslo, August 31st documents the end of a young man convinced he’s missed his chance at a worthwhile life and indeed questioning whether such a thing exists, merely whiling away his last hours before the dark.

The bulk of the piece sees Anders reuniting with various intellectual 30somethings of his past, some settled down, some still entrenched in the partying lifestyle Anders knows so well. Trier’s ability to invest each of their believable, searching conversations with a collage of implicit scars, fears and shared histories is a testament to his nuanced writing, the attentiveness of his compositions, and his talent in directing actors. Even if we only perceive them for a few snatched moments, these are fully-sketched people to a fault, and Trier gently evokes an unspoken wrestling match between their complex inner lives and Anders’ despair. Some are more compassionate about his state of mind than others, but all are helpless to save him, and this generation in this city knows just how easy it is to be fatally afflicted with malaise, wary of exposing themselves to Anders’ poison. One memorable exception is the way a prospective employer reacts when Anders reveals his past discretions in a job interview he *decides to turn up to*; not anger and disdain, not even a surprising, uncomplicated compassion a la Samantha from The Kid With A Bike (2011), but rather a patience, a refusal to make a snap-judgment or close any doors unduly.

Trier’s contemplative naturalism accentuates the tired, resigned smile that creeps onto Anders Danielsen’s face as he takes in his surroundings one last time; the thing’s shot through with a fatalism so patient and undramatic, it’s singularly eerie. Danielsen is astonishing; a much-lauded scene where he sits in a café, picking up sprinklings of other conversations between people with hopes and worries for their futures, is frightening in the way amused curiosity and total desolation seem such comfortable bedfellows in the pits of his bloodshot eyes.

The closest thing to a cipher is a man with whom Anders’ ex cheated, and who responds with defiant criticism when Anders piously offers him forgiveness. This is a rare scene that seems contrived to remind us that Anders has got himself into this mess, hurt plenty of people in the process, and only selectively accepts the responsibility. It’s redundant, already implied by previous, more subtle exchanges, but this remains a nit-pick, only sticking out amidst such a high standard of naturalistic observation. It’s almost rescued, in fact, when Anders simply accepts the criticism, because while a little egotistical and delusional, he’s smart enough to see the truth when it stares him in the face.

In a lesser film the inevitable “relapse” of the final act might seem conventional, but the key difference is that Trier never pretends to deviate from Anders’ demise. There’s no dealing in suspense and catharsis here, and if an early shot of an imploding building foreshadows a crashing end, he’s ultimately treated with no such theatrics. During the course of the film we lose nothing that wasn’t already gone, and so we end up right where we started, the loss palpable and irreversible.

Trier frames the film with static shots of this city that breeds people like Anders, accompanied in the prologue by reminiscences from the titular day, and in the epilogue by Oslo’s haunting natural ambience. His movies are bittersweet love letters to his home, and by placing the film in between these shots Trier consciously hangs it in perpetual limbo, mirroring the ennui pervading any city too fluid to provide a unifying direction and identity for its bright, literary youth. “Everything will be forgotten. It’s sort of a law of nature” says Anders, and he lingers only as a ghostly representation of the futility which weighs down even the headiest, dizziest memories of growing up in this place — memories that, were it not for indelible filmmakers like Trier, Oslo would already have swallowed up.

“I, who surrendered there beneath the cocoa trees/ where the elephant rots/ oh God in heaven…” Poem of the Week (November 18), by Enoh Meyomesse. Translated from French by Grace Hetherington.

"He was one of the first American prisoners of war I saw... His legs were messed up badly from one...