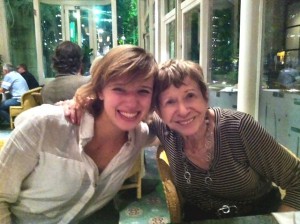 In a special interview, The Missing Slate’s Audrey Ryback talks to Sonia Pressman Fuentes, one of the pioneers of second wave feminism.

It is 9:30 on a Monday night in early autumn 2013 and I am having dinner with the 85-year-old pioneering feminist, Sonia Pressman Fuentes. Sonia is returning to Antwerp for the second time since 1933, when she was a 5-year-old child fleeing Nazi Germany with her family. Eighty years later, she now returns as an honoured guest of the City of Antwerp and the Red Star Line (RSL) Museum. That museum, dedicated to immigration and the RSL, transported Sonia and her family to safety in the U.S. in 1934.

Antwerp is both historic and industrial. Charming half-timbered houses line the narrow and winding grey streets of Europe’s second biggest container port. The RSL brought about 2.5 million passengers from Europe to North America and from North America to Europe between 1873 and 1934.

Sonia is one of five known surviving passengers of the RSL and the only one to be present at the festivities surrounding the Museum’s opening on September 28, 2013. She is scheduled to give talks at the Museum and Antwerp’s City Hall, to attend various festivities associated with the Museum’s opening, and to be received personally by the king and queen of Belgium.

But on this crisp autumn evening, just after a transatlantic flight, and in advance of her royal reception, Sonia is more interested in talking about the world she helped create than the world she survived. “I was very emotionally involved in the civil rights movement of the 1950s and 60s,” Sonia tells me.

But it was when she began her work at the Equal Employment Opportunity Commission (EEOC) in October of 1965 that she truly began to realize, “It was not just minorities who faced discrimination in America but women at every level of society.” The EEOC was charged with implementing Title VII of the Civil Rights Act of 1964, which, among other things, prohibits discrimination in employment based on color, sex, religion, and national origin.

Sonia is a woman of diminutive stature, barely five feet tall—“I am always the shortest in the room,” she says, “unless there are children.”—but with a tsunami personality.

Sonia belongs in the pantheon of pioneering feminist activists
She writes articles, gives speeches, updates her website, and published her memoir, ‘Eat First—You Don’t Know What They’ll Give You— The Adventures of an Immigrant Family and Their Feminist Daughter’, in 1999. And, on this particular evening, she is giving advice on next-generation feminism with the speed and clip of a veteran New Yorker, all the while ordering dinner and giving an account of her misadventures in flying to Antwerp from her home in Sarasota, Florida.

Sonia belongs in the pantheon of pioneering feminist activists who helped create a society that has moved women up to positions of power in politics, law, technology, and many other aspects of American life.

The first wave, in the 19th and early 20th centuries, culminated in women’s getting the right to vote. The second wave built on that foundation and continued the struggle for the emancipation from an iron patriarchy by working to secure equal rights for women in all aspects of life.

“I served as a gadfly to constantly remind officials and staff at the EEOC whenever an issue was discussed to remember the prohibition against sex discrimination in Title VII,” she recalls.

“I was the first woman attorney in the Office of the General Counsel at the EEOC. I compiled one of the early Digests of Legal Interpretations and I drafted the 1972 Guidelines on Pregnancy and Childbirth, which were later adopted into the Pregnancy Discrimination Act of 1978.” For that reason, her boss, Charles T. Duncan, the EEOC’s general counsel, took to calling her a “sex maniac.”

She recounts: “I became the staff person who stood for aggressive enforcement of the gender discrimination prohibitions of the Act … At the end of one day, I left the EEOC building with tears streaming down my face. I didn’t know how I had gotten into this position — fighting for women’s rights. No one had elected me to represent women. I didn’t know why I was engaged in this battle against men who had power when I had none.”

Sonia is a frequent flyer. Whenever she finds herself on board an airplane and sees a stewardess who appears to be over thirty-two or is wearing a wedding ring, Sonia experiences a special thrill because she knows that she helped put that woman on that plane.

Before the EEOC began enforcing Title VII, American airlines hired only women as flight cabin attendants for domestic flights and fired or grounded them when they married or reached the age of thirty-two or thirty-five. Sonia wrote the lead decision involving flight cabin attendants, finding that these policies were unlawful. She changed the lives and future careers of women in the U.S. within the airline industry.

It is after 11 p.m. by the time Sonia finishes her salad, her soup, and her story.

“What,” I ask, “do we as young feminists, have to work on next?” She tells me, “Young feminists have their work cut out for them both in the U.S. and abroad. There remain a myriad of problems. In the U.S., just to name some outstanding problems, there are homelessness and poverty; illiteracy; unequal pay; violence against women, including sexual assaults and domestic violence; maternal and infant health care; HIV-AIDS; access to abortions; human trafficking; the treatment of women with disabilities; the treatment of women in prison; and the representation of women in political life, the justice system, the entertainment industry, and in leadership positions in Fortune 500 companies.”

So, yes, in short, we have a lot of work to do. But we stand on the shoulders of those who came before. And, as an old African American slave preacher whom Martin Luther King was fond of quoting, said,

I walk out of the Hilton around midnight into the chilled autumn night, optimistically overwhelmed.

Audrey Ryback is a contributing editor for the magazine.

“They threw acid on her while she slept. I heard it got all the way down to her hands. Her flesh melted like a wax candle.” By Umamah Wajid, from The Missing Slate’s fiction workshop in Islamabad.

An Old Soul Angles Inside Itself

"Waits for a tug at the bait:/ a book with blank pages strung/ from the hook of a question mark."...