I made a terrible mistake. I fell for the hype. The trailers for Godzilla were so well executed, I actually went into the theatre expecting something miraculous and inventive to unfold, something that transcended its own mythology. I expected to see Bryan Cranston kick ass. But I was fooled. Instead of those things, I got to see the star of Kick-Ass kick even less ass than in those films, as a bomb technician whose character brought little explosiveness to this dud of a film. The disappointment I felt leaving the theatre almost rivalled that of when the closing credits began for Independence Day, another film that had misleading trailers. If you enjoyed Independence Day you’ll probably enjoy Godzilla, but you probably wouldn’t enjoy talking to me about either of those movies, or film in general, because I hated them, and everything they stand for. 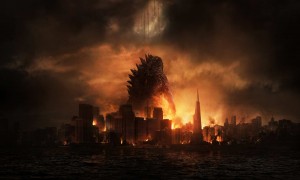 The problem with Godzilla is simple: it is a movie in which nothing really happens of consequence, presented under the guise of a film containing an epic story. The thing is, there really isn’t much of story, just a series of events, and there really aren’t characters, just spectators to those events. Once you realise what is happening, any illusion of drama vanishes, and you’re left with giant monsters destroying things for two hours. I get it, that’s supposed to be the appeal of classic Godzilla movies, but this film is presented under the premise that it is a rebooted and retooled concept, not simply a classic monster movie with updated special effects. I actually would have preferred a purely traditional monster movie with CGI effects to what this turd ended up being. If you polish a turd, it is still a turd.

There’s so much wrong with this movie, it is hard for me to narrow down my critiques to coherent paragraphs. I suppose my main problem was the fact that it didn’t seem to know if it wanted to be classic or new Godzilla. It tries to be both, and that is where it fails. For instance, it updates the look of the two MUTOs, but essentially Godzilla looks like a CGI version of the man in the suit from the classic films. While I appreciate the intent of keeping the classic look of the monster, it doesn’t really play well on the screen for today’s audience because it doesn’t look anatomically probable as far as giant reptiles go. Heck, the lizard in Roland Emmerich’s version was more believable than this. It really took me out of the movie the first time I saw the whole monster. To be honest, I was appalled that they went for that look. It made absolutely no sense to me to update the other monsters but leave Godzilla essentially unchanged. Might as well’ve had him destroy a model of a city while they were at it.

Then there’s the characters, or lack thereof. The writing of these characters is such a colossal failure, this could be the worst screenplay of the year. Who is the main character of this movie? Is it Godzilla? A CGI giant monster that is only awakened to “restore balance” to the Earth? Or is it the non-ass-kicker Ford Brody? The son of a conspiracy theorist who joined the Navy and spends the entire movie wandering miraculously from mission to mission like Forrest Gump, just trying to get back to his wife, who also happens to miraculously avoid death at every turn, despite being in a city ravaged by giant mutants? Or is it the scientist played by Ken Watanabe, the only character who seems to know that Godzilla is a hero, and the Navy should just let him fight it out with the other monsters while everyone eats their popcorn? The answer is none of the above. If there was an actual star in this movie, it was the U.S. Navy, and all able bodied teenagers should go enlist right now in case giant monsters show up tomorrow on our shores.

There are a few lessons to be learned from this failure, which I would have assumed by now would be common sense, but apparently not. First, a movie has to have characters with which an audience can empathise in order to be effective and create dramatic tension. Dramatic tension is what makes a story riveting and cathartic. It is impossible for an audience to feel empathy or dramatic tension when watching something through two barriers, meaning that the characters have to be directly involved in the events, and their actions have to propel the story forward. Without this element, you have them become separate from the action, and this creates a vacuum around them, killing any possible empathy or drama. Finally, a director has to pick a direction and stick with it, because in trying to achieve everything with your style, you end up having no style. Are you paying attention, Gareth Edwards? If not, there’s always the Navy.

Do receptacles of beauty share in the joy it creates? Returning contributor Madhurima Duttagupta pens the diary of a poet’s diary.

"The rotting yellow farmhouse/ always the same..." Poem of the Week (May 27), by Daniel von der Embse.