With the likes of Andrea Arnold, Ben Wheatley, Peter Strickland, Ben Rivers, Edgar Wright, Lynne Ramsay, Clio Barnard and Jonathan Glazer producing powerful movies in the new decade, and veterans like Terrence Davies and Mike Leigh still going strong, British cinema has rarely been more healthy. Another pair of filmmakers — married couple Christine Molloy and Joe Lawlor  — should soon be a staple on that list if their latest film Mister John receives the international distribution it so richly deserves. 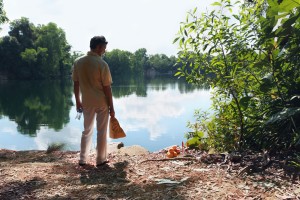 Known primarily for his roles in The Wire and A Game of Thrones, Aiden Gillen provides a deceptively complex performance here as Irish businessman Gerry, who travels to Singapore where his brother John has recently drowned. If the bleak, tastefully-integrated flashbacks are anything to go by (we hear bitter arguments from another room, though the camera merely lingers on an empty Lynchian hallway), he’s leaving behind a young daughter and a fractured marriage characterised by absence, sexual frustration and infidelity. Gerry identifies his brother’s body, reluctantly agrees to stay with his widow Kim (Zoe Tay, a wonderful performance befitting her fame in Singapore) and daughter Isadora (Ashleigh Judith White) to help out at the titular sleazy bar until things settle down, and gradually inhabits his brother’s vacated life, their identities disquietingly merging in a manner somewhere between The Passenger, Vertigo and Lost Highway.

Where other filmmakers might focus on solving the mystery of John’s death, or a liberating/disturbing descent into the debauchery of an exoticised Asian land, Lawlor and Molloy merely observe with restraint as Gerry flirts with the temptation of morphing into his more successful sibling. “It’s important to be closer to my family“, he persuades himself, neglecting to mention the one he’s left behind. Most of the locals welcome a stand-in for a man with a generally noble (if somewhat shady) reputation, and none moreso than Kim, who quickly has Gerry wearing some of her deceased husband’s clothes (one of many lovely small moments: she seems to inhale the scent of John’s shirt before handing it over) and tying up his financial loose ends. It seems to suit all parties, and almost feels like an obligation, particularly given the legend surrounding the lake in which John perished; John took the place of the water ghost, and must await a replacement himself before he can return to the mortal sphere, or so Kim chooses to believe.

Gerry later dives into that same lake with this legend in mind, and it’s difficult to say which brother emerges, though a distorted phone call to his *other* family suggests he’s no longer entirely on their plain of existence. The film is rife with water imagery, bringing to mind twin notions of creation and destruction as a life is passed from one body to another, and the paradox of a person in flux yet simultaneously remaining the same. Gerry even seems to mostly drink water, as though accepting his brother inside of him. The film employs its humid wilderness as an externalisation of Gerry’s psyche, the storm of emotions — displacement, grief, guilt, sexual frustration, the allure and dread of death — brewing behind his conflicted expression as he finds himself in the midst of this transference. The directors and DP Ole Birkeland (The Arbor) gently stoke these emotions into a heady delirium with evocative visual digressions, all the better for being shot on lush 35mm: yawning zooms into the beckoning brush, glacial overhead shots of the rippling lake in which John drowned, the camera lingering on spaces after they’ve been vacated, or tilted upward to the looming trees and spinning slowly on its axis. The sound design is similarly dreamy, with the tropical ambience building to fever pitch around these characters’ hushed conversations, and strains of Stephen McKeon’s aching Gorecki-esque score introduced during moments of reflection, all the more operatic and earnest set against the script’s understatement.

This all sounds like heavy stuff, but thankfully levity is offered through a number of drily comic diversions. There are two cases of unwanted urination, a farcical fist-fight between the deadpan Gerry and a huge, flamboyant Austrian sleazeball named Lester Hirsch (Michael Thomas) with an absurd Errol Flynn-styled self-portrait on his wall and a miniature dog named Poochie, and a sequence where Gerry visits the site of his brother’s death for the first time, looking out ambiguously over the lake, only to be bitten by a venomous snake emerging from the periphery. This would seem a groanworthy moment of biblical symbolism in a lesser film, but here the directors make an enjoyably crude joke out of its obviousness; the poison gives Gerry a protracted, embarrassing erection. “Don’t be surprised if you’re not feeling yourself,” warns the doctor.

Another British film, Peter Strickland’s Berberian Sound Studio, offers a helpful comparison. There, a repressed British sound engineer whose marriage is a caricature of domestication finds himself employed (though never paid) in a menacing European film studio, applying his expertise to a depraved giallo, his identity eventually pulled apart in the process. Mister John is a considerably less horrific affair, but the extent of Gerry’s own identity crisis is revealed in similar fashion by the film’s hallucinatory centrepiece, in which everything starts blurring together and his wife (Claire Keelan), seen for the first time, drops her underwear, unloads a number of scornful accusations and waxes saucily about her sexual exploits. Earlier, Kim asked Gerry to look over John’s recruitment videos because “you’re a man, you know what men like”. It becomes clear that John only hires sexually attractive girls for his lurid bar, and the girl in this particular video is transgender: “lots of people don’t believe I have a cock“, she says, as John checks for himself. In the dream, Gerry interviews his wife in the same fashion, and she appears to harbour the same kinds of doubts about Gerry. “I wanted someone to find me attractive for a change“, she says, and Gillen has the perfect face for a character who aspires toward the manliness of a classic thriller hero, but can only view himself as a vulnerable, impotent cuckold.

Gerry’s personal troubles may also be expanded into a discussion of post-colonial identity in Asia. Some have used Nicolas Winding Refn’s Only God Forgives as a contemporary, somewhat unflattering comparison point, with its dubious use of an exotic oriental location as a free-for-all of sordid debauchery to be exploited by corrupt and horny whites, but while Refn’s film arguably revels in this stereotype, Mister John treats it with wariness and melancholy. It suggests that the appeal of such conceptions, and perhaps the root of the colonialist impulses that caused them to be created in the first place, lies in this need for emasculated white males to reclaim their manhood through compensatory sex binges and power trips. Gerry is equal parts sympathetic and merely pathetic, a man struggling to negotiate this narrowing path between perceived sexual and moral failure.

Gerry may also serve as poster boy for the unstable identity of any post-colonial, commercialised or ethnically diverse state; like him, this mysterious land seems characterised by a collective sense of displacement and unsolved conflict, modern intrusions contrasting against the area’s ancient local folklore and wild natural beauty. This mood is epitomised by the haunting concluding sequence, as Gerry wanders numbly around his brother’s funeral as though it were his own, a ghost striving to take back the life he vaguely remembers living. There’s a feeling of multiple worlds uneasily occupying one space, and the spell is only broken in the very last scene, as Gerry finally reconnects with the self he was leaving behind, his emotions spilling over in one of the great climactic close-ups, exorcising not only his own demons but those of this entire landscape. Molloy and Lawlor cut to the credits at the perfect moment, allowing this cathartic release to speak for itself.

Poet of the Month: Hira A

"In fact, I think the only convincing, memorable female protagonist in Pakistani prose has been created by a man... Mohammed...