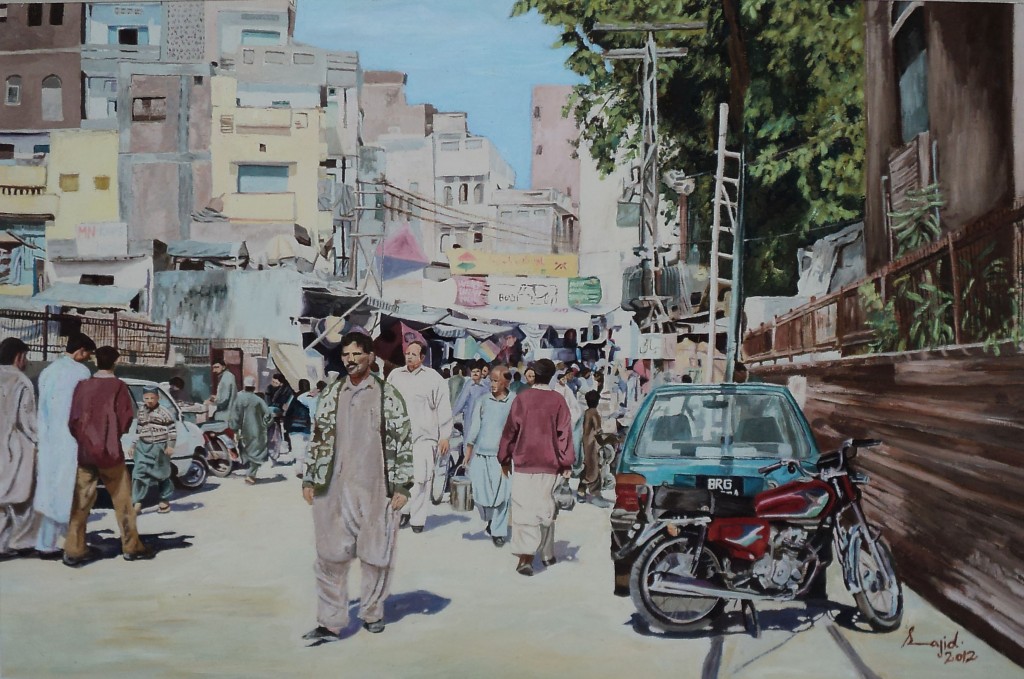 Translated from the Urdu by Aquila Ismail and Muhammad Umar Memon

Shortly after Partition Laji Bai Aseergarhvali moved here and set up shop in a flat on Napier Road.

Madam Laji had boarded a ship at Bombay’s Ballard pier with her adopted son and one of her girls and after arriving had stayed for a fortnight in Moti Seth Shikarpuri’s Mewal Mansion flat in Kemari.

She hadn’t just upped and left, she’d come loaded. So on Moti Seth’s advice, she bought this flat which was situated at the main intersection of Napier Road. In time the number of girls who worked for her grew to four and she ran her bawd-house with much enthusiasm. The pink shaded lights, the fans, the sofa set, carpets, and velvet cushions—worn out and dirty-looking now—all dated from those times of thriving business.

One rarely hears rumors about whores and bawds, one hears them about respectable women, spread with the intention of causing grief. But although it may sound strange, all kinds of rumors about Laji Bai were circulating on Japani Road and indeed all over the city:

“Her real name was Lila.” “No, it was Laila, and she used to be the court singer of the Maharaja of Aseergarh.” “Not at all. She was merely the Maharaja’s keep. What does she know about singing? But she had taught herself every trick in the shastras of Pandit Koka Kashmiri, a past master in the arts of the boudoir, that is why the Maharaja had …”

This last speculation seemed to appeal to people. As it was, no one had ever heard Laji sing. Her well-wishers had spread the story that back when she was young she used to coo like a koel, but her enemies fed her sindur, and she lost her voice forever. On her own part, though, Laji Bai never confirmed or denied this story.

One rarely hears rumors about whores and bawds, one hears them about respectable women, spread with the intention of causing grief.
However once, although no one remembers exactly what year, when someone very close to her, a man who is no longer alive, asked her to sing, Laji Bai had responded, “Deputy Sahib (the man had just retired as a Deputy Subinspector of Police), “I used to sing for one or for one hundred thousand. But that one is no more, and neither are the one hundred thousand. What can I sing now. No one would even understand my lyrics here.”

Cunning words—yes sir, they were!

The fact of the matter is, she couldn’t possibly have made as much by singing as she did by running four beds.

Gulbadan, Lajo, Bela, and Yasmin … the girls would change every two or three years, though not the four names. The girls were probably taught a smattering of song and dance, just so the other business could go on under the guise of musical entertainment.

In short, Laji Bai had four “pupils” and the son mentioned above, whom everyone called “Lajivala.”

Everyone called me Lajivala Javed. When we came over here and Laji Sahib bought this flat I must have been at the most sixteen years old. I was forbidden to talk to the people who visited the flat. And neither were they allowed to recruit me to run their errands or I to accept anything from them. Laji Sahib was very strict about this.

Gradually I learned how to conduct myself around these people, and how to talk with them, but I didn’t mix with them very much. All except Mazhar Ali Khan, a bank officer, with whom I did develop a kind of friendship. I even went to his office to visit now and then, for though Mazhar Ali Khan did come to the flat, he was not a “pleasure-seeker.” He was just an “admirer” of Laji Bai. He must have been twenty-four or twenty-five at the time, about the same age that I am now.

It isn’t me, nor is it Laji Bai that impels me to tell you this story. It is Mazhar Ali Khan, and he alone. What a courageous man! Who knows where he is now!

It was afternoon, I remember, when he walked into the flat for the very first time. Somehow the door had been left open. Laji Sahib was sitting comfortably in the reception room propped against a cushion, with the table fan on. A wet muslin sheet was draped over her feet, and she was humming something. Just then a handsome young man, in a white shirt, red tie, black serge pants and shiny boots, tapped on the door as if it were a drum, said “hello” and walked in.

Laji was annoyed, “What craziness is this? Where do you think you’re going, mian?” This mian was Mazhar Ali Khan. He stepped forward and kissed Laji Sahib’s feet. Laji withdrew them quickly, her stunned expression riveted on Khan Sahib.

Mazhar Khan answered in a cheerful voice, “I’ve been wanting to see you for a long time. You are the doyenne of music, the queen of this art.”

Laji, her brows wrinkled in a frown, said, “Young man, you have come to the wrong place. She does not live here.”

Khan Sahib laughed, “For me, you are the queen of music. Here, only you rule; the rest are your subjects.”

This ingratiating lie, this absolute impudence made Laji burst out laughing. Mazhar Ali Khan began to laugh too. He said, “Madam, only this month I have been posted as Assistant Manager of the bank across the street. If I could get you to open an account with us at this time, that would help me a lot. You will, won’t you?”

Feeling at ease now Laji Sahib leaned back on her cushions but continued to look at him with interest. Then she laughed and said, “You must be in a tight spot, young man, why else would you come peeking into brothels for business. Right?”

“I have an absolute bastard for a boss,” he said. “He claims he won’t confirm me in my post unless I sign up x-number of accounts for such- and-such an amount.”

Mazhar Ali Khan said, “I don’t know anybody here except you. And my manager, he doesn’t even know you. He’s so timid, so straight that he steps out of his car at a quarter to nine every morning, disappears into the bank, walks out again at a quarter to five and drives away going no more than forty miles per hour.”

“Well then, let’s begin.” Mazhar Ali Khan said, “Call the girls. Let me explain about accounts to them as well.”

Laji was totally thrown off by the manner in which this barely twenty-four or twenty-five year old Khan Sahib said “girls.” She felt an uncontrollable urge to laugh, but held back, covering her mouth with her hands. In the end, she couldn’t restrain herself anymore, and bubbled over, while Mazhar Ali Khan kept looking innocently first at Laji then at me.

As Laji was still laughing, Khan Sahib asked me, “Bhaiya, call everyone. There isn’t much time.”

I looked at Laji. She signaled her approval with a nod and continued to laugh.

Mazhar Ali Khan began to explain to the still-laughing Laji, “Madam, the matter is laughable, but then again it isn’t. Consider the fact that I have to solicit accounts worth hundreds of thousands of rupees, in just so many days. Now you tell me, if I don’t beg and plead, what else should I do?”

In the second part of a series on the Vietnam war in Hollywood, Michael Dodd explores how American cinema addressed...