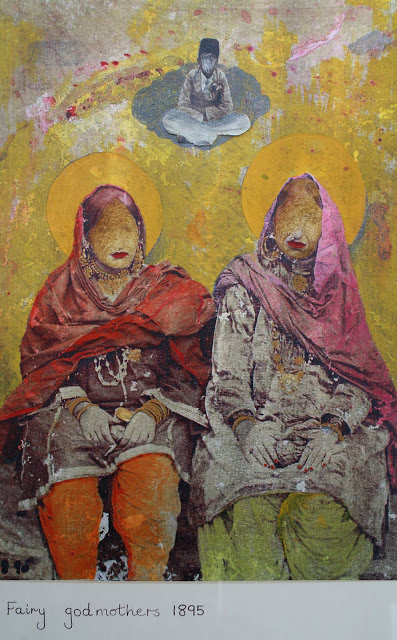 Mary and Mary are having tea.
Mary is an exemplar of inner beauty:
her eyes are lopsided. She is gawky and ugly.

People play kiss-chase with her bloated hand
amid the draperies. She’s ashamed
of the skin. She is trying to hide.

Mary, however, is profane, and wears
her clouds and clouds of perfumed hair,
and people come and stare at her.

Each day she crawls to Mary on her knees.
But they enjoy their teas,
and the passers-by who point them out: ‘the Marys’.

The Devil is licking his claws, debonair
to the glint in his cufflinks, a pair
of horns peeping out of his hair.

‘I can’t help it if I get the girls.
One flick of my tongue and they flock for miles,
proffering underwear. Or souls.

I just mop up the excess,’ he insists
with a smirk. He looks on in disgust
at the rat race’s heap of directionless angst.

‘The stuff I deal in has a hell of a kick.’
His cheekbones and nose could facet a rock.
He leans in close and his cufflinks click.

He is the Son of Man, and has
the perforations to prove it. His
main talent is loving. His love is enormous.

His fingers are ripe and plentiful,
rooted at the hand, pink from knuckle
to knuckle, capped with pristine cuticles.

He will die for you but ignore your texts,
and change the subject if you mention sex.
He has a small Oedipus complex.

He will let you close but no closer,
because he is the whole world’s lover.
One day you’ll find him brewing tea for your sister.

Flora de Falbe comes from London and is studying English at Cambridge. She has won various young writers’ awards including Foyle Young Poets in 2011 and 2012, and took part in the 2014 Tower Poetry Summer School. She has read at events including the Ledbury and Wenlock poetry festivals, and has recently been published by CAKE and The Emma Press.