At face value, Judd Apatow’s comments on the rape accusations against Bill Cosby were right and on point. It is a dissonant endeavor, though, to take his regard for women seriously when he’s made a career — and millions of dollars — out of portraying women as idiots.

More on that later. Apatow’s films, as we know, feature only lighter-skinned protagonists who may or may not self-identify as Jewish — be they a lone person (40-year old Virgin), a married or otherwise couple (This is 40 and Knocked Up), or a group of teenagers (Superbad). In these films — among others — minority characters (meaning especially their melaninic hue but also their film-role) are almost always the supporting cast/e, themselves the jokes; the bumbling, not-quite-human jesters in the theatre of the protagonist’s life. 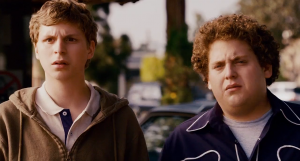 This isn’t to say, though, that the protagonists get off easily, and here’s why: Apatow’s movies exist so as not to let his protagonists — and by extension, viewers who relate to them — feel bad about their poor life decisions and the resultant life drama. This includes the half-masked and sly mocking of minority ‘races’[1] — a practice that many films besides Apatow’s thrive on — and this is not only Apatow, the protagonists’ and the favoured cast’s fault: the actors who play those ethnic-ized, stereotype-perpetuating roles[2] are just as guilty. Like Apatow and the rest of the cast, these ‘minority’ actors probably lower themselves to these roles for the promise of money and future fame, but more often than not those things never materialize. The names and faces of Steve Carell, Paul Rudd, Jason Segel, Leslie Mann, Jonah Hill, Will Ferrell, Seth Rogen, John C. Reilly and Adam Sandler are all familiar. But can we put a face to the names of Romany Malco, Gerry Bednob, Erica Vittina Phillips, Ken Jeong, Craig Robinson, Sam Dissanayake? We can for some, but they are still subsequently typecast in the same bumbling-idiot, dismally-employed or not-quite-all-there roles we’d initially seen them in.

Judd Apatow therefore offers a glorified validation of lives of inner despairing and silent despising by coddling his niche market members’ indulgent sexing, eating and Netflixing, baby-on-the-waying and money-worries, instead of providing practical, liberating plot lines to take them away from the dysfunction. At times, however, he will expose the darkest truths of his characters’ situations in scenes of emotional outburst or loud, blame-filled spats between couples — you know, those kinds of truths that actually can initiate positive and forward-moving change in life. But one can’t help but think that these are just a temporary monkeywrench in the overarching mill of mediocrity; often punctuated with incessant f-bombs and expletivist metaphors to ramp up the tragicomic drama. “It’s funny because it’s true”: sadly, maddeningly but let’s-not-dare-to-examine true, which is why you can only laugh. Here’s an example from This is 40, sadly uttered by the wife after a heated argument with her husband:

“What are we even doing? This is not making me happy. You’re not happy.

The same character then asks/wonders aloud:

“Would we even still be together if I didn’t get pregnant fourteen years ago?”

To which her husband remains silent.

But! the wrench must be thrown out and the mill kept churning, because if people extricate themselves from their inter-reactive drama, business will fold. Quick — and here’s where the money-by-mediocrity comes in — quick, return to the overarching portrayal of a world with underlying channels of silent, tense compromise: where the protagonist couple convince themselves (and try to persuade the audience) that they really do love each other and will try to make it work. However, it’s obvious to objective viewers, or the children and even friends of similar real-world couples, that these two need to run from each other and toward their own true selves. The actors themselves — and it’s evident — know they can’t fully inhabit their roles when their characters have this change of heart or inner epiphany that, despite all the raw and sour truths they exposed, say they love each other. They, the actors, don’t fully buy it, but it’s a movie — it’s Hollywood, it’s the Apatow brand — and it’s bought them.

Tristan Marajh is a guest contributor for the magazine.

[1] Which, by juxtaposition, is often for the unspoken but decipherable purpose of sweetening the implied “Jewishness” represented by the more endearing characters.

[2] Some examples of this: “Go fuck a goat!” says one SmartTech employee in The 40 Year-Old Virgin to another, to which the latter responds in disturbed repulsion: “Why you always tellin’ me to go fuck a goat, man?!” The implication here is, of course, that it’s not an unusual occurrence for members of the initial employee’s perceived background to have sex with to goats. In another example, in the same film, one employee asks another: “When your baby is born, is it already on parole?” Of course, protagonist Andy and the other light-skinned lackies are above — and evolved beyond, or at least aloof from — all that. Let the ‘minorities’ sort themselves out with each other.

How to talk to a former warlord

"Now this one is difficult. Counter-intuitive./ Remember they are still human..." Poem of the Week (March 17), by Heather Bourbeau.