Lindsay Denniberg’s Video Diary of a Lost Girl begins at the very beginning — The Garden of Eden, circa the Creation of the Universe and All Life Itself. The film takes an immediate detour into Talmudical hermeneutics, dramatizing in its prologue the forbidden union of Adam and Lilith. And yet it visualizes their ill-fated coupling as a glitchy, psychotronic fusion of Japanese Noh and video feedback experiment. Against the wailing gurgle of New Wave synths and Gregorian-style chants, two masked figures — lithe, naked, their bodies suffused with static — emerge from the multicolored detritus of Lisa Frank’s post-apocalyptic fever dream and share a carnal embrace before the literal “Eye of God.” Flickering waves of analog artifacts, a swirl of eye-searing color, the expressionless gaze of white masks enveloped in white noise. Their lovemaking is brief, violent, and (for us) visually assaultive. Lilith awakens from her post-coital slumber, absconds to the Red Sea (a place far removed from Jehovah’s judgmental gaze), and makes love to a legion of demons. From this infernal gangbang come her blighted progeny: the Lilin, a new breed of succubi who harvest the souls of men through sexual intercourse. 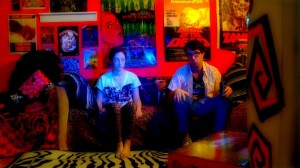 Fastforward another eon or two — from Denniberg’s glitch art rendering of Paradisio to the Pee Wee’s Playhouse-esque storefront of Adult Sinema. There we meet Louise (Priscilla McEver), a sardonic, saucer-eyed video clerk who fritters away her spare time scarfing down Doritos, watching public domain horror films, and — during her off-hours — skulking around dank, neon-streaked alleyways trying to lure rapists back to her murderpad. She is, we discover, a centuries-old succubus whose vampirical compulsion to drain the life-force from her victims through the coital act correlates mysteriously (and symbolically) with her monthly menstrual cycle. Or, as she so nonchalantly puts it at one point, “I’m going to fuck you to death now.”

Lindsay Denniberg’s fuzzy, glitched-out synthesis of German Expressionism and 80’s trash-horror slightly predates Under the Skin in its depiction of annihilative, all-consuming female sexuality, leaning less on the extraterrestrial “otherness” of Glazer’s film than on its feminist reinterpretations of Judaic myth. Although equally aestheticized and invested in reconfiguring rape culture paradigms (Louise even initiates each conquest with a theatricalized ritual that vaguely recalls Johannson’s somnambulist moonwalk), Video Diary of a Lost Girl infuses this narrative of lethal sexuality with a more art-damaged, post-punk sensibility, emphasizing more strongly a sense of play, self-reflexivity, and self-conscious schlock. It shares as much in common with Glazer’s film as it does with Liquid Sky, Cafe Flesh, My Demon Lover, and the two Weimar-era Pabst-Brooks collaborations from which Denniberg derives her title. Aesthetically, the film resembles the aftermath of Cory Arcangel barfing out a chunky, neon-glittery spew all over The Cabinet of Dr. Caligari: two-dimensional digital backdrops, riotous smears of eye-straining dayglow, analog distortion crackling beneath the seams of every shot, obtuse angles jutting forward into color-coded landscapes. Characters speak in genre-savvy aphorisms plucked straight from the pages of Fangoria, combat the daily absurdities of their lives in an archly affected fashion, and schlep through expressionistic spaces like the semi-inert fixtures flicking around inside Stephen Sayadian’s giant-sized pachinko machine. This is the sort of film where a tattered-looking Cannibal Ferox T-shirt might constitute (with apologies to Sailor Ripley) a symbol of one’s individuality and belief in personal freedom.

But these stylizations amplify, rather than detract from, the undeniable twinge of melancholy that bobs and eddies beneath a sea of audio-visual distortion, and Denniberg maintains a degree of empathy seemingly at odds with the film’s detached formalism. There exists in Video Diary of a Lost Girl a direct interplay of contrasts, a productive tension between naked emotionalism and self-referential formalism — ironist snark and blunt sexuality, campy excess and unfettered directness, rabbinic myth and riot grrrl iconography, analog and digital, Eros and Thanatos, the suppleness of skin and softness of light counterbalanced by the flat textures of Denniberg’s aestheticized universe. With the introduction of Charlie (Chris Shields), a low-rent cinephile-cum-burglar and possible reincarnation of Louise’s first love, Denniberg’s film gradually morphs into a surprisingly intimate meditation on the cavernous divide between sex and intimacy, on the gnawing feelings of dread and self-loathing one feels when faced with their own biological impulses. Their courtship — a hurricane tour of karaoke bars, arthouse theaters, and cardboard cemeteries — begins with an exchange of barbed one-liners and ends in an aborted sexual encounter where Louise wrestles with her desires and their possible repercussions. For Denniberg, the link between sex and death becomes literal and absolute — desires spiked with arsenic and caked in poison.

Beyond the sugary dollops of schlock-horror kitsch that make up its surface, Denniberg’s film winds up being a surprisingly tender and wistful affair, an unsettling exploration into love, sex, and body dysmorphia anchored by Priscilla McEver’s doleful eyes and silent movie-ready face. And that in itself is appropriate, considering how her circumstances gradually transform Louise into some sort of one-woman amalgamation of the “holy trinity” of silent movie icons she (and Denniberg) dutifully namecheck throughout the film — the predatory deathbringer of Nosferatu, the doomslinging vamp of Pandora’s Box, and (in an inevitable conclusion) the anguished martyr of The Passion of Joan of Arc. Louise’s cinephilic fantasies become reality, leading her down a path toward her own possible self-destruction.

“Oscar Wilde said something to the effect that he never needed to go out in the evening when he could find such wit and wisdom in the books he had at home. I feel something similar when I read interviews on Edge.”
Robert Cottrell’s Spotlight Site series visits John Brockman’s Edge.