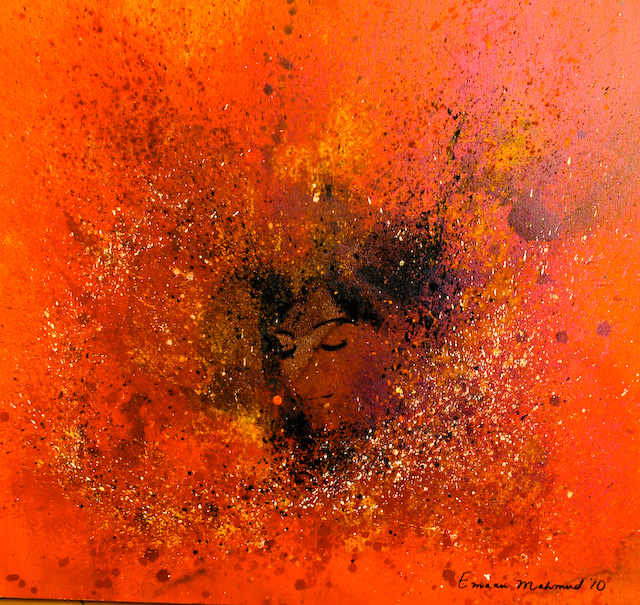 A memorable burst, by Emaan Mahmud

Twenty-nine years later, I still think about Chernobyl and my old dream about the fire disturbs my sleep again.

Images etched in my mind: abandoned houses in Pripyat, nearby farms with broken widows and peeling plaster, a discarded picture of Lenin next to a broken stroller and a half-dressed child’s doll, all the clocks frozen at 11:55 A.M. at the moment electricity was cut off to symbolize a quiet horror, and the most alarming of them all is the photo of the mutant pig fetus found near the Chernobyl site in 1988.

I grew up in the 1960s, living behind the Iron Curtain with fears of the Cold War as a daily reminder. As a child in Kiev, I played hide-and-seek in my backyard between building ruins that had been bombed by the Germans during World War II. We hid from each other in bomb shelters, the product of escalating nuclear tensions between Communist leaders and the U.S. Then the Chernobyl catastrophe in 1986 profoundly shook and changed the lives of those of us who lived in close proximity to it.

At 1:23A.M. on April 26th, 1986, as we slept, nuclear operators could not contain a failed safety test. The consequences proved dire. Aside from some rumors about a fire at the Chernobyl Nuclear Power Plant, I knew next to nothing about the explosion. I felt a mixture of anxiety and confusion. The Kremlin-controlled media was silent on the matter. To keep busy, I made my favorite delicacy—pastry with custard cream—using milk I bought that morning. Interrupted by my neighbor Natasha who walked in with a bottle of red wine, she handed it to me and said, “Drink it daily from now on and give a bit to Mila. Helps wash out radioactive elements.” Natasha then whispered if I knew how much radiation was in my freshly made cream. I placed my marvelous creation into the trash, no questions asked. Natasha was a physician and I respected her opinion. I never baked another custard cream dessert again.

The Soviet media was useless. News reporters occasionally mentioned that at the Chernobyl Nuclear Power Station the situation was under control. We could listen to the Voice of America broadcasts but only infrequently; reception was poor.

By the end of May 1986, Kiev became a ghost town, inhabited mostly by single men
The next day, I went to the clinic where I worked as a speech pathologist. Our doctors found an unused Geiger counter. A small team of our male doctors measured the radiation level on the window shelves inside the hospital. They’d gotten a warning from our chief-of-staff not to make the results public but just the look of fear on their faces created a dark atmosphere of panic and helplessness among my colleagues.

I sought out my supervisor, Dr. Voyko, to find out more. She was too scared to talk openly but eventually confessed that the radiation measurement had exceeded the norm by at least ten times. “Please don’t share this with the others.”

Walls of secrets and whispers surrounded my life in this Communist country.

When the same group of colleagues attempted to measure the radiation level at the clinic the next day, the scale wouldn’t budge. Our chief-of-staff’s secretary called different medical facilities asking to borrow a Geiger counter, but it seemed as though all of the ones in the city hospitals had stopped working overnight.

Under the cover of darkness, all the radiation counters in all the medical facilities in Kiev were disabled. The Secret Soviet police, extremely skillful in discretion, had conducted their operation unbeknownst to all staff.

By the end of May 1986, Kiev became a ghost town, inhabited mostly by single men. These men were drunk or, at the very least, tipsy and highly oversexed. Drinking large quantities of red wine and taking frequent showers were the only remedies known and available to those remaining in the radioactive zone. Most wives and mothers were long gone, having run away to safety with their children. Women remaining in the city mastered the art of caution. It became an ingrained habit for me to look around when I was outside, even during the day. Unsolicited offers and indecent proposals from men of various ages were unpleasant and rude. This was an entirely new picture of instability and tension.

When I close my eyes, I can still see myself, all alone in my newly renovated apartment in Kiev, on Malushko Street staring at the wallpaper, feeling depressed and unable to sleep. I existed on a diet of Turkish coffee and chocolate bars, and an occasional can of sardines, for an entire month. Being a vegetarian for the previous ten years, I craved apples but I wouldn’t have minded a piece of chicken—anything to bring some diversion into my life and diet. I sent my fourteen-year-old daughter, Mila, to Moscow on May 2nd after receiving a night phone call from one of my colleagues about the radiation level rising rapidly due to a change in the wind. The first wave of radioactive pollution had fallen on Belarus. Mila stayed in Moscow with my Uncle Arkady, a former prisoner of the Soviet regime, and his new wife. I missed my daughter and worried about her constantly. As a healthcare professional, I was bound by new military rules and was not allowed to leave Kiev. Like the rest of my colleagues, I could be drafted and sent to work near the burning nuclear plant at any moment.

Ukrainian citizens soon learned from workers and soldiers returning back from the burning station, that the nuclear danger was escalating. The radiation level at the place of the explosion was so high that those who worked there received mega doses very fast. I visited my colleague’s husband, Kolya, in a hospital after his return from a two-week shift in Chernobyl. I had only seen him in a family photo before meeting him in person. He was a tall, fit officer. I saw Kolya in the hospital bed, skeleton thin, wired with IV, wearing a hospital gown that couldn’t hide all of his burned skin. I knew that people with radiation illness were not contagious, but seeing a young man suffering from the direct exposure to the nuclear fallout that had taken place so close to Kiev, was sobering. He could barely talk. When he did, he mostly repeated the same phrase: “Gloves. We need gloves. Why they don’t give us gloves?” And his hands looked like raw meat. His wife explained that Kolya, like the rest of his team of first responders, worked to extinguish the fire. The order was first to shovel sand into large sacks and then throw them into the fire. Sometimes they loaded those huge sacks onto helicopters. Pilots dropped them on the burning station from the air. All soldiers labored with bare hands. The fire had consumed Kolya.

I’d been wearing the same outdoor clothes since the day of the disaster and washed them daily. I kept the windows shut and did not open the blinds. Nobody told me what the best protective measures were in the radioactive zone so I made guesses. I avoided touching trees or grass. It’s hard to say whether it was caused by radiation or just early and warm spring weather in 1986, but all the famous Kiev chestnut trees, limes, and poplars were glowing a brilliant shade of green.

Radiation is not something you can feel, smell, see, touch, or taste. It is not tangible and can be detected only by radioactive counters. Exposure to radiation leads to symptoms similar to cancer, and a wide range of other illnesses. Because Communist leaders covered up the danger we all were exposed to and offered no protection to those of us living 60 miles away from the burning Nuclear Station, the post-Chernobyl days were psychologically damaging to say the least.

"See the exposed wall over there—the cracks in the plaster are shaped like an agave plant." Story of the Week...