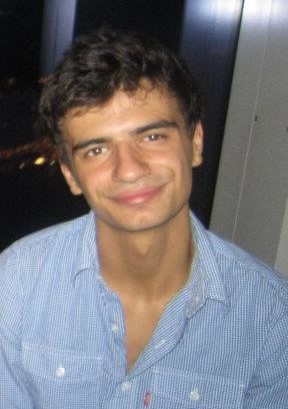 Our May 2015 Poet of the Month, Daniel Voskoboynik, describes himself as “a rootless cosmopolitan”. His poem ‘Lampedusa’ is a strong response to the Mediterranean refugee crisis: of the hundreds of thousands who seek political asylum in Europe, many die in the attempt or find themselves ostracised by society.

In conversation with Audrey Ryback, Daniel discusses “the refugee plight” and the role poetry can play in “drawing attention to real-world problems”.

‘Lampedusa’ is clearly addressing the plight of refugees attempting to reach Europe from across the Mediterranean. Lampedusa as a place has become symbolic for the refugee plight. Why did you choose to write about it? What power does poetry have in communicating and drawing attention to real-world problems?

I decided to write the poem in light of the vast human tragedy that has unfolded across the Mediterranean, where tens of thousands have been abandoned to drown at sea. Lampedusa as you mention is merely a geographic emblem, like Melilla, the Evros River, Christmas Island or the Sonoran desert, of the hope of those who embark on perilous journeys for a better life and the dismaying callousness that meets them.

Poetry cannot enact policy or rewrite legislation, but it can attune someone’s gaze and sharpen their sensitivity to the pain of others. Ultimately, displacing public indifference and achieving social change relies on compassion, which is built from stories and emotional connections. It is hard for us to be viscerally stirred into action by faceless statistics or a columnist’s conclusions.

Poetry can play a crucial role in finding a language of vulnerability, in holding out a mirror to our world’s blemishes, in helping us to feel differently about reality.

Zbigniew Herbert said that the “task of great poetry” was to “render justice to the visible world.” There’s certainly a truth there.

I believe that “giving a voice” to others requires empathy. Do you think empathy is a key tool of a poet? Or can she/he only ever speak for her/himself?

Empathy and attentiveness are rudiments for a poet. Having said that, you have to recognize that you can never be true to the voice or emotional intricacy of another person, and sometimes, speaking is no different from silencing. These facts wrap ethical knots across the act of “speaking for others” or “lending a voice to the voiceless”.

[pullquote align=”right”]Poetry can play a crucial role in finding a language of vulnerability, in holding out a mirror to our world’s blemishes…[/pullquote]The poem is purposely written in the third person, and is more of a sketch from afar than a personal testimony. There is ample and important space for poetry written in another voice, but on this issue, I felt disingenuous assuming the viewpoint of a person experiencing a crushing deprivation that I can only begin to understand. Particularly when writing about topics like these, one has an obligation of truth and decency, an obligation to not opportunistically view a great tragedy as a dramatic aperture for art.

You make several references to religion in Lampedusa. What significance does religion have for the “refugee issue”, in your opinion?

I think the imagery of faith seemed relevant to me because faith defines the act of crossing: the staggering hope of staying afloat, of reaching the shoreline, of piercing the garrison, of fulfilling the European dream. It’s a leap of desperate audacity.

Who would you ideally want to read this poem and why?

The poem is a limited and defective take, but certainly other literature around the human crisis in the Mediterranean should be read as widely as possible, particularly across European nations. We need to shake ourselves from our insouciance, and rouse a political response that can restore well-funded search and rescue operations in the short-term, and develop more humane policies around migration and asylum in the long-term.

The final line refers to the border between life or death, or even the boundary between humanity and inhumanity. The strength of these distinctions far exceeds the arbitrary demarcations laid down by maps.

"While war and civil strife tear at parts of Ukraine, Chernobyl keeps its eerie silence." Nellie Barg recalls the aftermath...