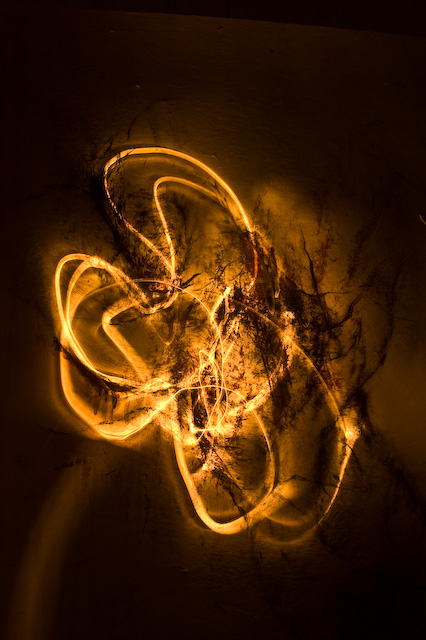 Light up by Emaan Mahmud

Calcutta still bursts into our bedroom
In the tangled web of night stretching before dawn
When silence is deceptive
And memory’s cages rattle faintly
Like thieves in the shadows, violently discovered

I see us as we were, a couple, standing in a wound…
Thin strips of heat peel off the gutted pavement
As feeble men in faded lungis
Squat and cup their hands before a pipe of tainted water
Testicles hanging down like shriveled mangosteens

Flies stitch up, in, down, out from decapitated
Goat heads to the filmy eyes of those still burdened with a day, an hour
A butcher slips into the space of the psychic disconnection
And there is a frantic buzz of motion
Hooves stamp, chains chafe along lesions and a victim is pronounced

A call to prayer crackles from the speakers of a distant mosque
Moans that resonate from wall to wall, from mind to wall
While Rama carries Sita toward the lights and the pantheon of Hindu gods drift
Like incense through swarming alleyways
Gather restlessly above understanding

A ten year old boy pokes your stomach
And we watch as he unravels a small twist of cloth
Unveils an infant collage of poverty:
Balled fist, distended chest, tongue extruded
And struck dry in death

The boy lifts the tiny body toward us
As if advertising desperation
But his expression begs no sympathy, requires no pity
It reveals only a triumphant smile
A confidence that a baby’s carcass is an undeniable economic asset

But it is more. It is a viable means to survival
Death itself is an instrument, a tool to be utilized to sustain life
And as we simultaneously fumble through crumpled rupees
Our minds calculating exchange rates, dismissing them
We realize that a corpse can last, at most, a few weeks…
Morning catches like a match on the horizon
And I am again conscious of time, of the separation
Of you and I in our bed
I press my forehead to your back and realize, with absolute clarity
Our inability to live with joy is our greatest guilt

Thomas C. Dunn is a Los Angeles-based writer. His screenwriting work has received worldwide film distribution and festival inclusion. As a playwright, he is the winner of Samuel French’s prestigious Short Play Festival. His plays have been presented in over thirty theaters nationally and internationally and have been featured in numerous festivals.

Poem of the WeekpoetryThomas C. Dunn

Mohsin Hamid’s haunting and vivid story merges reality and science fiction, narrating the struggles of a few survivors hunted by machines which fly overhead in a nameless barren land.

The Stories I Am Always Writing

"In this story I will write about a character who will walk around a tiny artificial bush of plants trying...