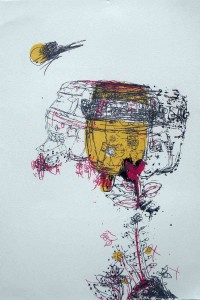 The bus stopped and the engine died. “Twenty minutes,” shouted the driver, and disappeared for a fag. Most people filed out after him and headed for the toilets, but a few followed the courier to the strange round tower down by the loch.

“Funny place for a lighthoose,” said a thin old man in a grey flat cap.

“It’s not a lighthouse,” said the courier, prim and proper, like a doily on a silver cakestand. “It’s the Glenfinnan Monument. It commemorates the raising of the Jacobite standard in 1745.”

“Izzat right?” smiled the man. “I’m all for raising standards. Especially when it comes to coach tours.”

“This is Saturday,” said another man to himself, “How are we gonnae find out the fitba results?”

High on the hill behind them, a diesel train puttered along slowly, before rattling across a graceful, curving viaduct that vaulted a deep green glen.

The courier sighed. The Glasgow groups were always the hardest work. You couldn’t tell them anything. They thought they knew everything.

“Who’s the guy at the top of the lighthoose thing?” asked a stout man wearing a sports top and tracksuit trousers. The courier briefly stared at him in surprise; this group usually only asked questions about toilets and mealtimes and whether this hotel did fish and why there was no white bread at breakfast.

“It’s a Highlander, a representative of the Jacobite army. Some people will misinform you that it is Charles Edward Stuart, but it’s not.”

The courier walked to the loch shore, sand and dead leaves under her feet, and watched the rippling water throw back the grey of a cloudy sky. A stag roared on the hill, the deep wild sound of October.

“It is not Bonnie Prince Charlie!” the tracksuit man shouted at someone, “The posh wumman telt me it wisnae!”

At least it’s Americans next week, the courier thought.

“If it’s no’ Charlie, then, who is it? Eh?” the argument continued.

She turned away from the loch and rejoined the group, who were now shambling towards the bus. She began to wonder idly what she’d spend next week’s tips on.

David McVey lectures in Communication at New College Lanarkshire. He has published over 100 short stories and a great deal of non-fiction that focuses on history and the outdoors. He enjoys hillwalking, visiting historic sites, reading, watching telly, and supporting his home-town football team, Kirkintilloch Rob Roy FC.

David McVeyfictionStory of the Week

Author of the Month: Nafiza Azad

"I've learned from reading that you can tell a story in two ways: one is via the written narrative and...