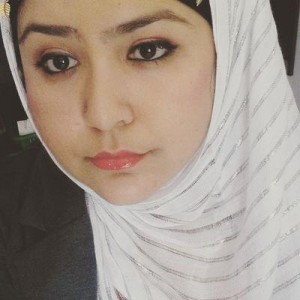 Nafiza Azad is an Indo-Fijian Canadian Muslim currently residing in Vancouver, British Columbia. She has a BA in English Literature and an MA in Children’s Literature from the University of British Columbia. In the latest installment of our Author of the Month series, she talks to Casey Harding about the importance of emotional sincerity in writing and her love of Young Adult literature.

Perusing your book blog, Bibliophilic Monologues, it is immediately apparent at how well read you are. How does that influence your fiction? Do you find yourself mimicking the styles of other authors you have been reading?

I think to be a writer, you need to be a reader. In fact, I’d go so far as to say that being one without being the other is not possible. Reading is incredibly important to me. In times of emotional turmoil, I always visit a library or bookstore. Just surrounding myself with words is cathartic. I don’t think I mimic the styles of the authors I read but I do pay close attention to the way they tell their stories. I look at the techniques they use and the tropes most common in the genres I read. As an academic, I do pay a lot of attention to the subtext in the stories I read. Being aware of the things implied but not expressed can add to the reading experience or detract from it—at least in my experience. I try to be aware of the subtext in my stories. I’ve learned from reading that you can tell a story in two ways: one is via the written narrative and the other is via the subtext, specifically, the things that remain unsaid but implied.

You mentioned that ‘You and I: A Short Story in Fragments‘ came from the comments that a girl made in a documentary you saw about orphaned children in Palestine, is this how most of your fiction is written? Do you find yourself drawing more from your life or the lives of others for your inspiration?

I read a book about actors and acting once and a teacher told one of the protagonists that every life experience, whether sad or happy, should be felt intensely and used as a resource to draw from when acting. Though there is no stage on which to perform, being a writer is like being an actor except you are always playing multiple roles and you always have to know each character inside out.  I always strive for emotional authenticity and sincerity in my stories. So even when the subject I’m writing about is completely different from anything I have experienced in life, the emotions felt by the characters are similar if not the same. Emotional sincerity is paramount in my stories and often, to be completely honest, hinders my writing. I cannot move forward if I am not satisfied with the way a character experiences a certain moment so I often write and rewrite until I’m satisfied.

A follow up question, how did you decide on the alternating sections? They have the effect of pulling the reader back and forth between these states of intense emotion and allow the story to achieve moments that would not have worked with another style. Did you begin the story in this way or did it grow that way after a few drafts?

I have experienced grief at multiple points in my life so I’m familiar with how the pain ebbs and flows. The human heart (in my opinion) cannot sustain intense emotion for long periods of time without relief; I don’t think we’re built that way. I wanted the narrative voice to be both young and old. I wanted her to battle both despair and rage. There is a moment during anger when everything attains a clarity and the next course of action seems obvious—whether it is the correct path or not is up for debate. I also thought it important to have a picture of the protagonist which is why I shifted perspective for a bit. The protagonist is emotionally shattered and I wanted ‘You and I’ to express this shattering in not just the story but in the way the story is told. I used fragments to express the pieces of her self that still remained intact after what she went through.

Are there any books you would recommend to someone hoping to write? Any books that were particularly influential to you?

This is a very difficult question to answer. I have a long way to go yet so I cannot, in any way, speak definitively about it. And to ask a bibliophile to recommend a book…I’ll tell you what works for me. First, just write. Don’t let anyone (anyone at all, ever) tell you that you cannot write or that you shouldn’t write. One of my professors actually told me not to write a novel for my Masters thesis and I did so simply because she didn’t believe I could. Secondly, read. Don’t limit yourself to one genre or style. Read everything. Find out how stories are told and what works for you. Find the stories that you want to tell. This is going to sound strange but when I was a biology student, I learned about fungi and their absorption stage. At this stage, they just absorb nutrients and then once they’re done, they grow into mushrooms or whatever fungi do (I should have paid more attention in class). The point is–have your own absorption stage. Consume media, books, movies, life. Once you’re brimming over, write.

You have a MA in Children’s Literature and co-run a Young Adult book blog. What was it that brought you to YA literature?

When I was 17, I moved from Fiji to Canada. I didn’t know how to make friends (I had never been the new one in class, ever), how to function in jeans, and I am still clueless about pop culture. I couldn’t construct myself in the language my classmates spoke and I wasn’t really sure I wanted to. So I went to a library and after I got over my initial delight that the check out limit was 50 (!!! In Fiji, I was only allowed two books at a time), I started reading. YA literature, though very much lacking in diversity, had characters who were going through the same things I was. Children’s literature (The Book Wars tackles all genres and ages of children’s lit) attracts me because it celebrates the imagination in a more unrestrained manner than say adult literature. People are quick to dismiss children’s lit as unsophisticated but the genre is extremely complex and children can be some of the most difficult people to please. To answer your question, YA literature appeals to me because I am intrigued by the liminal space in which young adults reside. Not adults but not children either, with constantly changing emotions—capturing adolescent characters is like trying to handle mercury. I like the challenge.

Last question, anything new in the works?

I’m querying the YA fantasy (fairytale?) novel that I wrote for my thesis. ‘The Road of the Lost’ is about a brownie, a mythical creature, who finds that her entire life has been a lie. She goes on a journey to find her ‘self’ and meets interesting people and does interesting things along the way. I am currently working on the sequel.

The first match of the Poetry World Cup quarter-finals.

"We did not know/ That power does not grow/ From the barrel of a clenched fist..." Poem of the Week...