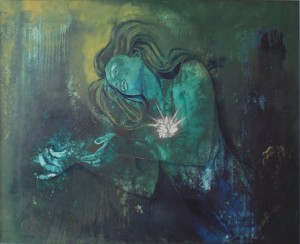 You killed my family and called it liberation. You spilled so much blood that the ground bled for weeks afterwards. And while I was screaming myself hoarse not knowing who to mourn for first, you were being awarded medals for valor. How much courage does it take to kill one village full of women, children, and old men?

Grief has the sharp taste of sour oranges. It numbs your tongue and steals your appetite. Grief is a symphony, a musical performance, each note designed to rip your heart out in a crescendo of little bulbs of pain.

Grief is the memory of a day perfectly frozen in the past. It is a song played on the radio. A voice whispering in the dark. It is a chipped blue china cup that your mother loved and that survived the carnage when she didn’t.

And when the grief spills over, there is madness. It is the memory of how many smiles your lips used to be capable of that breaks you. Insanity is when your mornings drown in dew and the length of your fingers are all wrong and your eyebrows seem unable to make that climb down from your forehead back to your eyes – insanity is when you cannot hear yourself think because the grief inside your head is too loud.

I was recruited at the funerals. There was a woman whose smile had the jagged edges of a broken window. There was a man whose face was scarred diagonally as if someone had tried to cut through his face into his head. They told me that there were three stages to grief: pain, numbness and acceptance. Acceptance? I laughed. You would have too. Then they collected the pieces of me that still remained and offered me a way to get even. They told me that if I followed them, I would be able to hurt you just as much as you hurt me. So I did.

Sometimes I tie myself up in sentences and throw myself in bursts of black ink on pristine white paper. Ruining it. Making it as I am: smudged and unformed.

After I had banked the grief and could think again, I started to learn. Life had meaning once more. It had purpose and anger. The man with the scarred face brought me to a place in the mountains where there are others like me. Girls poised on rooftops, cliffs and other precipices. Here, they teach us how to fall.

My days are spent upended, suspended in a phantasmagoria. Reality peeks from behind the shabby curtains in a musty room belonging to someone who wanted to stay firmly entrenched in yesterday. We seek relief desperately in cups of chai and stories of the past. But our sentences keep unraveling and our dreams are full of monsters. Who are we? Little girls unlearning themselves. What have we become here in the mountains with the rage and the rain and the full stop to our lives a date marked in red on the calendar?

Briefly, I mourned us all.

After I had banked the grief and could think again, I started to learn. Life had meaning once more. It had purpose and anger.

The training bears quick results and vans full of little girls leave the mountain house daily. They don’t come back. We don’t expect them to. Tomorrow is my day. Tomorrow is near. So near there are only minutes until the day reaches out with its ice cold fingers and traces the end on my skin, in lieu of the henna I will never wear.

It’s not a specific tragedy that steals the sleep from my eyes tonight – it’s the ever present realization, as soft as gossamer wings beating against bare skin – that there is a lack of language, a lack of heart and a lack of me in these words that keep getting colder. No dreams of heat. No feelings of passion. A cold blanket of eternity – a darkness without stars. Just an image of a thought falling apart on itself. A sharp separation of the soul from the body. These words, these cold words, the lack of passion – I have emptied myself of meaning. Who am I? what am i? why do I matter? Do I matter?

I want to talk about a candle. A lit candle in a dark room. Flickering in the breeze that wafts in through a window slid open. White, shabby curtains, the walls are gray stone. The candle does not give much light. Barely enough to illuminate the bed that is sparsely made with a faded sheet that has seen better days. The candle is halfway melted, the wax has accumulated on the earthen dish in which the candle stands. There is someone on the bed. A brown body, lying awake. Shorn hair, a white t-shirt, and pants bunched up at the knees. A young girl. She has thin unmarked arms; the scars are all inside. She is lying on her chest and the only thing that breaks the silence is the gentle sigh of her breathing.

There are no pictures in the room, no personal decorations. Nothing that would indicate that someone lives here – except for a closet in the far corner of the room, away from the window. Carefully hidden in the shadows so that barely any light falls on it. It is immense. Made of mahogany with tall doors: grooved and padlocked. There is a chest inside the closet. A chest that contains the wrong sort of things. Windows, you can call them. Windows to another world.

The candle flickers, fights. There is a gust of breeze. The candle loses. The shadows deepen.

It is almost time. I have strapped the explosives around me. I am terrified.

It has been forty-five days and three hours since I lost everything. Everyone. In an hour, I will burn.

Many people will die. Someone’s mother, someone’s father and someone else’s child. They will be mourned. It is too late to find my conscience. She died along with my sister. If it is hell that waits for me, then so be it. My anger will lift my feet and cover the distance from here to the middle of the field. Where you have gathered to celebrate your victory.

If there’s mercy, it will smell like smoke. I know that this world is pieced together by losses and life will move on despite the dictates of my broken heart. Nevertheless, I will burn. For the people I lost, for the country that is no longer mine and for you. Yes, you, snug in your belief of happiness and an ever after.

I was not born a monster. Remember that.

About the purest memories: or about light

"it was being there, being so young/ and death so far off,/ when there were no dead no funeral processions,/...