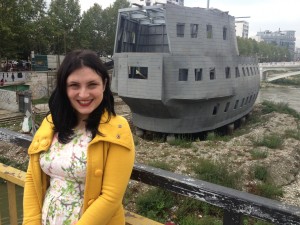 Skopje. Known by many as the capital of that country that has one of the longest names in the history of names. Also, as the capital of that country that has a dispute with Greece over its ridiculously long name. And, perhaps, as the birthplace of Alexander the Great, maybe (again, because of the Greeks). Being a former slavophile and Yugonostalgic, to me Skopje represented much more — a distant dream and a place I’ve always wanted to visit. I finally got the chance when I recently traveled there for a business trip, attending some big forum for journalists.

When I arrived at the airport I was surprised when I was greeted in fluent Serbo-Croatian by the taxi driver. It shouldn’t have been a surprise. After all this little south-eastern European country was part of Yugoslavia and the Macedonians had to learn Serbo-Croat in schools. But there was something else to it. My taxi driver told me he was actually from Sandžak, a geographical area divided between Montenegro and Serbia that has a mostly Muslim population. Seeing how surprised I was that the first person I’d met in Macedonia was not Macedonian, he explained to me that Skopje, and Macedonia in general, were a lot more heterogeneous than most people thought. In fact, I later learned that ethnic Macedonians make up only about 66 percent of Skopje’s population.

Upon arriving in the city center, the driver told me I would be staying in a traditionally Muslim Albanian part of the city. The city is, he explained, divided into two parts: the Albanian part and the Macedonian part. The driver departed, but not without leaving me his phone number and telling me to call him anytime if I need anything.

From where he had left me, I decided to walk to the conference location. Skopje offered yet another surprise. Wherever I looked there were giant statues bearing images of Macedonia’s prominent historical figures. I wasn’t ready to see that many monuments in such a small area. I turned to my journalist friends for an explanation. A Montenegrin journalist writing on the subject explained to me that the statues were part of a project entitled ‘Skopje 2014’, in which the nationalist government decided to revamp the city and bring it back to its classical origins. Apparently, the move would also be a slap in the face to Greece, with whom Macedonia has an ongoing dispute over its ancient roots. (A dispute that has gone so far that Greece is now blocking Macedonia’s accession talks with the European Union until Macedonia changes its name, which happens to share a name with a region in Greece.) 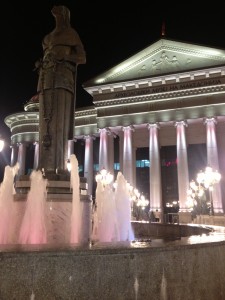 A priestess stands sentinel in front of the archaeological museum

“It’s pure money laundering”, said a Macedonian journalist I had just met. “There is even a statue of Tito, even though the current government is anti-communist.” Later on, I learned that the statues of the Yugoslav leader were most likely there as an act of opposition to the government. This clandestine erection of Tito statues in Skopje had nothing to do with ‘Skopje 2014’, but was most likely an act of political dissidents who believe the country’s socialist history shouldn’t be erased. However, the journalist I talked to made another good point. He said that the money spent on ‘Skopje 2014’, allegedly between 80 and 500 million Euros, could have been spent on other things, considering the high poverty and unemployment rates in the country.

“It’s an attempt to reclaim some of its ancient history, strengthen national identity, and at the same time, bring more tourists in”, said the Montenegrin. She said that the project, announced in 2010, was supposed to be finished by 2014, but that was obviously not what happened.

It seems that all of them were right. The statues, and the other recently erected buildings, seem to ignore much of the role the Muslim Albanian population has played in Macedonian history, a population that comprises 20% of the total city population. However, the government claims that they are simply setting out to undo the damage the city  suffered in 1963,  when a large earthquake destroyed 80 percent of the city, including many of the neoclassical buildings. At the time, the city was rebuilt in a rather bland socialist style, and ‘Skopje 2014’ was conceived as an attempt at an ‘antiquisation’ of the city. 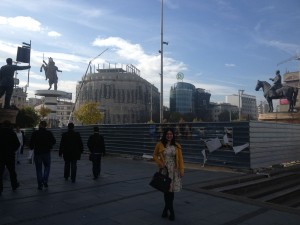 The people of Skopje do not seem to be bothered by these statues, however. A street vendor selling souvenirs just shrugged when I asked about them. Instead, he seemed to be more interested in showing me what he considered the nicer parts of the city, especially after hearing that I am from Bosnia. “I am Macedonian, Orthodox, you know, but I like being here on the Albanian side of the city”, he explained. “Honestly, I did not even know what religion we were until I was about 20. I had a Croatian girlfriend and I was visiting her in Rijeka, when someone asked me what religion I was. I had to call my father to ask”. His next words hold an air of nostalgia, “but, that was in Yugoslavia.” He said with a heavy breath which expressed more than words ever could. However, instead of dwelling on the past the friendly street vendor invited me for tea in a nearby restaurant, and called a young Roma boy to come watch his booth. He proved to be a good tour guide. He explained that the Ottomans, who ruled the city for over 500 years, were masters of architecture, showing me the buildings left from that time period. “You see how this yard has an exit about a meter to the left compared to its entrance? That is so the wind does not go through. So there is no draft. Very practical”. And so very pretty I would add. Buildings in Skopje show a rich history of different cultures living and building together. We walked through the old town, called stara čaršija, the oldest and the most picturesque part of Skopje dominated by oriental architecture. Passing the Vardar River, decorated by wooden ships and numerous water fountains all built as part of Skopje 2014, I entered another part of the city, in the center of which I found a 20-something meter high bronze statue of Alexander the Great. Funnily, the statue does not bear Alexander’s name, once again because of the dispute with the Greeks who claim Alexander as their own. Instead, the statue is called ‘The Great Warrior’.

The statues, as well as the other buildings that form this faux-classical European architecture, have been criticised by many, not just because of their role in historical reconstruction, or because of the resources used that could have been spent to better the lives of Macedonian citizens, but also because of their aesthetic features. The ‘Skopje 2014’ project has been labeled kitsch and grotesque because statues from Macedonian religious and historical life have been crammed into any available public space.

Pretty ironic, taking into account that the government has claimed to have started the project, among other things, to give Skopje a more monumental and visually pleasing image. But at least the statues give visitors a reason to talk to the locals and ask for an explanation. This gives them an opportunity to gain insight into Macedonia’s political and cultural life, as well as historical events.

Although there aren’t exactly one thousand statues in Skopje, there are enough that their abundance has become the source of many jokes among Macedonian people. Going back to the airport, named of course ‘Alexander the Great’, I asked my Sandžak taxi driver how many people live in Skopje: “With the statues, some 2 million. Without them, half a million”, he said with a smirk, driving away from Statuetown.

Maida Salkanović is a Contributing Editor for the magazine.

"In the middle of the night I woke/ To no more voices no more laughter/ Only sky lanterns..." Weekend poem,...