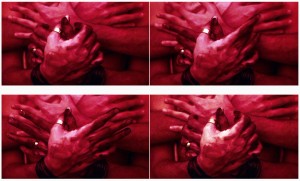 Moth Series (Burn Like a Moth to a Flame), by Ehsen Lynch. Image courtesy the Artist.

The morning sun was barely out when Samuel’s maid Rebecca stood before him seeking his audience on a matter of great importance. Sitting behind a giant desk, cluttered with papers, a pencil in his left hand, Samuel at first did not look up. She knew well that he was not to be disturbed at this hour.

“Oga I don’t know what to do. I just don’t know what to do.” Rebecca’s voice faltered. Her mouth crumpled like a soda can. Her eyes glimmered, tears rolling down her face, and away in one flawless motion. A doctor, though no longer in active service, Samuel kicked back his chair and dashed toward her. “What is it? Tell me, what’s the matter?”

Standing beside her, Samuel asked repeatedly what the problem was, but Rebecca kept crying and wouldn’t say. He was a very busy man, bound to lose his patience soon. Already he found himself thinking about the essay he was still writing for the Guardian UK, about certain words he might use in place of others, words that had weight, connotations that could be brought to bear. Why had Rebecca chosen this moment to disturb him? Could she not leave and come back later? Watching her tears, which rather than wane, seemed to flow ever more profusely, he fought the urge to snap at her.

“Calm down,” he said through clenched teeth. He had been in confining situations before, no thanks to his past profession. He knew the winding road of appropriate attitudes, how to restrain himself, breathe, lower his voice, loosen the frown on his brow, pretend. Samuel knew, most of all, that people’s memories were sharpest at those moments when help was denied them. “Calm down.”

When Rebecca began heaving, he leaned toward her. “I can’t know anything unless you speak, do you understand me? You have to speak.” His tone, at once harsh, imploring, placatory, seemed to strive towards physically steering her to some place of calmness. He rejoiced inwardly when Rebecca’s sobs began giving way to sniffles. Sliding down her nose, pausing at the precipice of her upper lip, was a line of snot, like molten glass. Samuel whipped out a silk handkerchief, ready to swipe at it, but it was too late. Rebecca sniffed it back up, wiping what remained with the back of her hand.

Pressing the handkerchief into her hand, Samuel led Rebecca to a sofa beside his bookshelf. He sat next to her, watching with an intense gaze as she dabbed her eyes, and emptied her nose into the handkerchief that she had laundered and perfumed. “What are men doing to you?”

She rambled a little, her voice slightly muffled by the handkerchief. Did he remember her former place, how it was demolished, how she came to live where she did now?

“Calm down,” he said through clenched teeth. He had been in confining situations before, no thanks to his past profession. He knew the winding road of appropriate attitudes, how to restrain himself, breathe, lower his voice, loosen the frown on his brow, pretend. Samuel knew, most of all, that people’s memories were sharpest at those moments when help was denied them. “Calm down.”

Samuel nodded. He did recall some unfortunate business involving illegal buildings. It was on the news. Unfortunate, but necessary for development.

She was dressed in a brown skirt and a blue blouse, buttoned up to the top. As of that morning she had worked for Samuel for exactly five months. Twenty weeks of good service, humility, punctuality, cleanliness and most of all respect for his privacy. Unlike the maids before her, she did not invite her lovers into his home and attempt to pass them off as her brothers. Plus, if a situation arose where Samuel needed help locating some item in the house, day or night, in person or on the phone, she was always willing, patient with her description of where the elusive item might be. He’d come to trust her, depend on her. And yet, that morning, hearing her speak with so much detail unnerved him somehow, made him shudder.

“Wait a minute, slow down. What are you saying?”

“Sir, what I’m saying is that in the midnight, this boy will be putting his finger inside.” Again she lifted her index finger.

Samuel frowned at the offending digit. As a boy, he and his friends had played a game the object of which was to determine whose finger could bend the most at that exact joint where the distal phalanx ended and the intermediate began. Okonte Magnus, a devil of a boy, possessed an inhuman ability to bend his to an angle almost perpendicular to the rest of his finger. He could achieve this feat with all his fingers except the pinkie. Okonte Magnus grew to become a kingpin of a notorious gang that terrorised the city for a time. Samuel wondered if his gift had aided him in some way, in the pulling of triggers, perhaps, or scaling of high walls.

Relived from the pressure of speaking, Rebecca’s face fell lax. Her eyes seemed to swell in their sockets as she stared at him, her nostrils flaring in step with her breathing. Her lips became jagged arcs. But it was her eyes that most unsettled Samuel, the naked desire within them, to understand why such a thing should happen to her. A desire to understand it from him.

Samuel scarcely understood it himself. “Wait, are you saying he touched you privately while you were sleeping, or requested something of a private nature?” On his tongue the words were unwieldy, stubborn.

Rebecca simultaneously nodded and shook her head. Then she paused, took a deep breath and told him everything.

"He touched a knee or an elbow// with the tip of his paintbrush when he wanted/ me to turn this...