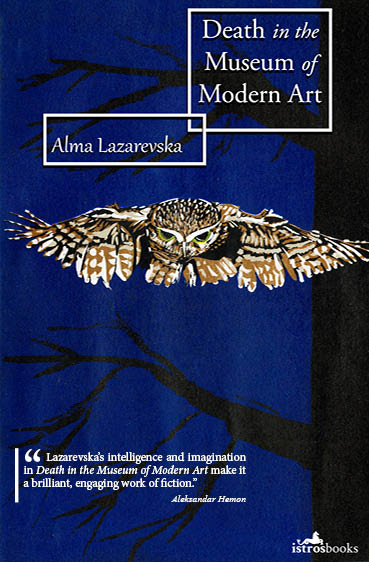 Alma Lazarevska’s ‘Death in the Museum of Modern Art’ is a collection of six stories about life in besieged Sarajevo, during the war in Bosnia-Herzegovina between 1992 and 1995. Often regarded as one of the pioneers of women’s war writing in Bosnia-Herzegovina, Lazarevska represents an alternative to the heroic war discourse, the traditional way of writing about wars. Instead of providing the reader with a strong courageous hero who fights in the name of greater ideals and depicting his audacious struggle, Lazarevska paints a picture of everyday life, the very structure of which is altered by the war, and the people struggling to survive with little control over their own existence. Lazarevska’s characters are not fighting on the front line: they are entrapped in the city that is being surrounded by the enemy.

Although not strictly fitting the characteristics of l’écriture féminine, Lazarevska’s writing came to be recognized as among the forerunners of the new type of women’s writing that emerged during the Bosnian war. Without bearing specifically female characteristics, this style of writing distinguished itself as a new form primarily because it offered an unorthodox way of writing about the war, in contrast with the dominant warrior discourse.

In Lazarevska’s collection, every story has a female protagonist. All stories but one (the story of Dafna Pehfogl) are narrated from the first person point of view. The tone of all the other stories suggests that the protagonist might be the same woman: a highly-educated woman with a male partner and a son, reminiscing about small events and details, moments from life before the war. Lazarevska never engages in macabre descriptions of war’s cruelty, but instead focuses on details such as the absence of milk in the besieged city and the meaning of those details to ordinary people. “How important is having enough milk to a pregnant woman?” Lazarevska asks the reader, depicting a woman’s state of mind on discovering the changed state of her body.

Lazarevska’s characters are not fighting on the front line: they are entrapped in the city that is being surrounded by the enemy.
Resources are scarce, so the characters burn their parquet, books, and furniture in order to heat their living quarters. Someone cuts down the only tree in the courtyard, and the protagonist contrasts this to the pre-war time when even the smallest decision about the building had to be approved by the building’s caretaker. However, the war changed the rules, the caretaker is gone with his children, and people have to make do with the few supplies they have. Decisions that had previously been regarded as important, such as the closure of one entrance to the building and the purchase of a new broom, suddenly seem petty when one is constantly faced with the fear of death and a shortage of basic living supplies.

Moments from before war took over the city often intertwine with the characters’ present, seeming surreal in their new context. Surreal, too, is the questionnaire the protagonist of the book’s eponymous story receives: the survey is to be administered by a foreign magazine to 100 residents of Sarajevo, and one of the questions asks Sarajevans how they would like to die. Lazarevska uses moments like these to pinpoint the absurdity of the war experience.

Another such moment shows the protagonists trying to establish a false sense of control in a situation where they can have no control over the events of their life. Although matches are a valuable commodity in such times with no electricity or gas, the protagonist’s partner uses them to light his cigarette, although he could also use the flame of the candle. The protagonist protests at first, but after he tells her that every time you light a cigarette on candle flame a sailor dies, she supports him in his mission of saving as many sailor souls as they can.

The stories show how disrupted one’s life becomes under such extreme circumstances, and how important life milestones get lost in the whirlpool of war. One such milestone is teaching children about death. In a futile attempt to protect her child from the notion of death, the protagonist in ‘Greetings from the Besieged City’ changes the ending of a book she is reading to her son so that a character is saved from his inevitable literary death. The futility of such attempt in the place where death is as common as life is clear to the author, but she is not giving up until the boy asks: “Mummy, was there this much blood when Pablo was killed?” showing her that he knew all along.

“Although you live in a besieged city in which dozens of people may die in one day from the blow of a single ball of fire, you still find it difficult to start to accustom your boy to the fact of death.” says the protagonist, summarizing the essence of life in such extreme conditions. People struggle to continue living, even if every day is a hollow dance with death.

Although death is alluded to in all the stories, and its presence is felt in almost every sentence, it is notdirectly connected to the characters in the stories, except for the first one, the story about an old lady with a strange sounding name: Dafna Pehfogl.

In ‘Dafna Pehfogl Crosses the Bridge Between There and Here’, the ill-fated Dafna ends the series of inauspicious events that comprised her life with a fatal misunderstanding. Dafna was to be saved from the besieged city and brought on the other side to reunite with her family, but almost at the end of the crossing, Dafna decides to greet the soldiers who helped her with the transfer. Due to her ill luck, one of the soldiers interprets her gesture as a provocation and shoots her. In the end, Dafna has her polite femininity and the soldier’s offended masculinity to thank for her death.

In this one, as well as all the other stories, the siege of the city has become a part of life for the characters. They narrate the curious details of the war without displaying any strong emotions. The siege has become their way of life, and quiet, helpless sorrow has become their state of mind. ‘Death in the Museum of Modern Art’ examines the everyday reality of living in a besieged city, where children turn into bloody heaps of flesh and buildings burn floor by floor, but terror gradually becomes almost mundane. The residents spend their days looking for firewood and reminiscing about the past, and nights saving sailors’ souls and entertaining alienated foreign journalists by giving them answers to that cold, suggestive question — a question that encapsulates the indifference of the outside world: How would you, indeed, like to die?

"I am a new addict to lipstick. I wear dark shades that can’t be hidden. I wear shades of red."...