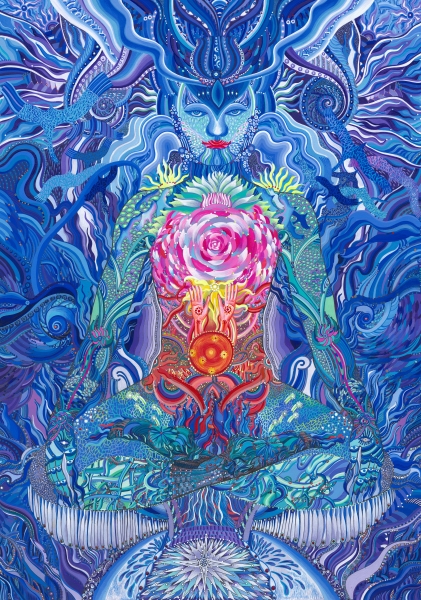 Indigo meditation, by Iryna Lialko. Image courtesy of the artist

Your lips go from sunny side to suicide in a single click
You’re too fast for any sniper.
You know when to hit the ground and stay down.
When you step out, armies rise up or die by your eyes.
Your soldiers are of all ages, genders and religious denominations.
They have nothing in common but the image of you carried in secret lockets. or
burned into their third, unblinking eyes or tattooed into armpit and hairline
and between the toes.
If you glance at yourself when you’re kissed, the mirror plucks out its eyes, for
no other image will ever again suffice.
You are kissed and kissed again. You are always kissed.
You wake up to a kiss and fall asleep to one. In between, kisses.
You say your dreams in a stunned small voice that belongs to the other world.
Your pauses are glacial, the age melds its continent to your breath, your tears
are the end of seasons.
Sometimes, on an escalator, if you speak to yourself your unheard words will
make a stranger stop in grief.
Your power is sustainable and biodegradable.
Your green will outlast plastic.
You invented electricity. The grids belong to you.
They blaze your praises, visible from rocket ship and satellite.
When you skip town, the wind on the street says your name.
Ah, it says. Kang. Sha.
No one escapes your influence.
Once, out of my mind, I tried, but the grass barred my way.
And the stars wandered out of their pens.
And God exhaled.
And no faith was left in the world.

Jeet Thayil‘s four poetry collections include ‘English’ and ‘These Errors Are Correct,’ which won the 2013 Sahitya Akademi Award for poetry. He is the editor of The​ ​Bloodaxe Book of Contemporary Indian Poets. His novel ‘Narcopolis’ won the 2012 DSC Prize for South Asian​ ​Literature, and was shortlisted for the Man Booker prize, the Man Asian Literature Prize and others.

"Felix again, falling through sky,/ an age ago, an hour. He is/ a mouthful of air, a savior at the...