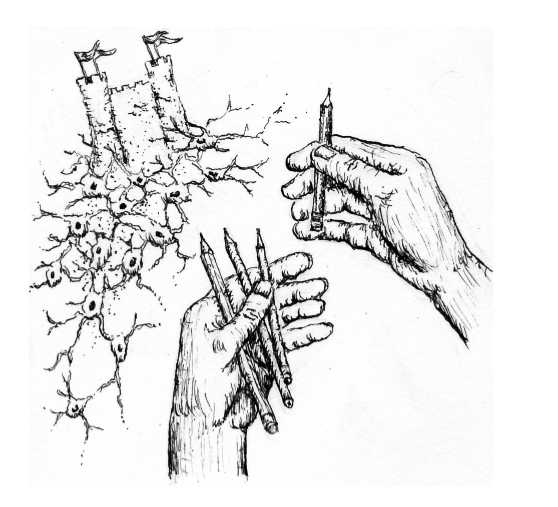 Artwork by Emily Ingle. Image courtesy of the artist.

When Fly died they cut through the walls and pulled me back to Admin. She was crouched in the corner behind pencils pilfered from desks, neatly lined up in a size-order curve.

She calmed down when she realised it was me. She gathered the pencils and stuffed them into her pockets. I didn’t dare argue and shot a look to the Staff to say they shouldn’t either. They sliced us back to the Wilson house, eyes averted, faces blank.

‘Good to see you, Fly,’ I said, with all the right tones.

I let her zigzag the room in the lazy circles that earned her the nickname. Her statement was not directed at me. It was part of the process, part of the figuring out.

I let myself wonder how she died. Painful or quick? Her own fault or no-one’s? I thought about Mum and Dad, arranging another funeral. Then I shut it all out of my mind. A distant world, another life. Irrelevant. Fly stopped buzzing and turned away. Now the question was asked, not with words but with her stance.

Night fell and the Wilson family buried into their beds. Worried Staff sliced peepholes from Admin, which didn’t help with my own nerves.

‘Let’s do some colouring-in.’

She froze, her eyes diagonal-right as she processed my statement.

‘Easy,’ I said, the only possible response.

We started with Jim, the father. I dropped the sheen over his left eyelid and showed Fly how to do the same to his right. She was very gentle.

I let her zigzag the room in the lazy circles that earned her the nickname. Her statement was not directed at me. It was part of the process, part of the figuring out.
‘We’re going to draw his dreams,’ I said. A flutter of panic. I called up the stylus before she could react and the sight of the instrument stilled her. I let her take it and called up another for myself.

‘It’s very easy. Put the pencil into his ear and I’ll tell you what to draw. Watch me.’

I slipped my stylus into Jim’s left ear and the nib appeared behind the sheen. Today Jim’s boss had told him all about his skiing trip and it had made Jim jealous. I drew a sandcastle, a deck chair, a holiday brochure.

She shoved her stylus in and giggled while she sketched out triangle sails, a rectangle deck and big, smiling, circle sun.

The next morning the Wilsons woke to a Saturday and gathered for breakfast, eager to grasp the colours of their dreams. They talked about plans for the summer.

Fly was crouched in the corner, no pencils. She buzzed out a story to her fingers, told them their dreams perhaps. She’d been in a happy mood last night. It wasn’t going to always be that easy, but it was a damn good start.

David Hartley is a writer and performer based in Manchester and has been published in various places including Ambit, Structo, and The Alarmist. ‘Spiderseed’ is his third collection.

"not one person in the office knows/ that Henderson keeps a panther in his spare room at home..." By Neil...