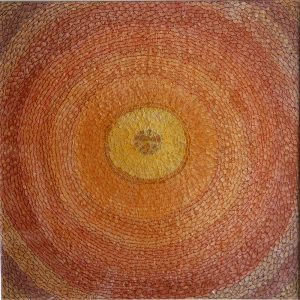 It was a late November afternoon, Autumn had yet to show its face.

The city was baring its blackened stone walls. The sky was frozen, forsaken, far far away. People shoved past one another on the pavements. The cars rushed by.

A gloomy day, but dry, it must have been around four o’clock in the afternoon.

The streets were packed that day. I walked quickly along the pavement. At one point I found myself behind a shabbily dressed man carrying a blonde-haired girl, one of those girls whose beauty is indescribable. The beauty of a summer dawn, the beauty of a lonely rose, the beauty of droplets of dew, mixed with the incredible beauty of human innocence. Instinctively I found my eyes drawn, for a moment, to the girl’s face.

But the man was walking very slowly and I, propelled forward by the force of the city, passed in front of him. But as I passed, I turned my head to take another look at the girl.

It was at that moment that I saw the man. I stopped in my tracks. He was an extraordinarily beautiful man, he must have been about thirty, with a face etched with misery, neglect, solitude. His suit, faded and greening with age, revealed the outline of a body eaten away by hunger. His hair was light brown, parted in the middle, slightly on the long side. The unshaven beard had grown to a point days ago. Beautiful cheekbones stood out in a face gauntly sculpted by poverty. But even more beautiful were his eyes, his blue eyes, shining with solitude and sweetness. In that very instance in which I looked at him, the man tilted back his head to look towards the sky.

How to begin to describe that movement?

It was a frozen sky, silent, far far away. The man tilted his head as someone who has reached their limit, when they have no more to give and so instead turn outwards for a reply: his face was the very picture of suffering. His expression was simultaneously one of resignation, imploration and fear. He was walking slowly, very slowly, along the edge of the pavement closest to the wall. He was walking with his back very straight, his body open, as if his whole being was given to imploration. He was looking at the sky, his head tilted backwards. But the sky was simply plane after plane of silence.

All of this happened within a mere moment and, therefore, although I can picture very clearly the man’s suit, his face and his movements, my own emotions fail me. It was as if watching the man had rid me of all feeling.

The crowd never stopped passing by. We were in the main hubbub of the city. The man was alone, completely alone. Floods of people passed by without even noticing him.

Only I had stopped, as useless as it was. The man did not even look at me. I wanted to do something, without knowing what. It was as if his solitude was beyond any help I could give, as if it wrapped itself around him, separating him from me and it was too late for words or any other manner of consolation. As if I had my hands tied. Just like sometimes in dreams, when we want to do something but are unable.

The man walked very slowly. I stood still in the middle of the pavement, parting the sea of people moving towards me.

I felt the city rushing me on and separating me from the man. No one saw him slowly walking, wandering along, tight to the stone cold wall, with his head tilted back and the girl in his arms.

Now and again I still go over what I could have done in my head. A quick decision was needed. But my soul and my hands were weighed down with indecision. My vision was blurred. Hesitation and doubt were my only allies. So I stayed still, powerless, in the middle of the pavement. The city rushed me along and a clock chimed.

Only then did the crowd stop and form a circle around the man. Shoulders stronger than mine pushed me backwards. I was on the outside of the circle. I tried to push further in but I was not able. There were taller people in front of me, I couldn’t see past them. I wanted to catch a glimpse, I asked nicely, I tried to push, but nobody let me through. I heard wailing, orders being shouted, a whistle being blown.

I remembered that someone was waiting for me and I was running late. The people who were unable to see the man were starting to see me. It was impossible to stay stood there.

So, like a swimmer who is caught in a current stops resisting and goes with the flow, I stopped resisting the movement of the city and let myself be torn away from the man by the wave of people.

But as I continued along the path, surrounded by heads and shoulders, the image of the man continued to float in front of my eyes. And within me a confusing feeling blossomed, I had seen him before.

Quickly I recalled all of the places in which I had lived. A film reel developed. The fast moving images slipped quickly by, flickering. But I didn’t recognise anything. And I tried to piece together and piece through all the memories of paintings, books and photographs. But the image of the man continued to stick out: his head tilted back and looking towards the sky with an expression of infinite solitude, abandonment and imploration.

And from the depths of my memory, extracted by the image, appeared, very slowly, one by one, the following, unforgettable words:

At that moment I understood why the man who I had left behind was not a stranger. His image was exactly the same as another image which formed within my soul when I read:

After the hardships and disappointments of mortal life, after the pain of the flesh, begins the test of the final torment: The silence of God.

And all the skies were deserted and empty above all the dark cities.

I turned around. I pushed though the river of people. I was worried I had lost him. There were people, more people, shoulders, heads, more shoulders. But suddenly I saw him.

He had stopped, but still had the girl in his arms and his eyes on the sky above.

I ran, almost pushing people over. I was just two steps away from him. But at that exact moment, the man fell to the ground. A river of blood ran from his mouth but his eyes still held the same expression of infinite patience.

The girl fell with him and burst into tears in the middle of the pavement, hiding her face in her blood-stained dress.

Only then did the crowd stop and form a circle around the man. Shoulders stronger than mine pushed me backwards. I was on the outside of the circle. I tried to push further in but I was not able. There were taller people in front of me, I couldn’t see past them. I wanted to catch a glimpse, I asked nicely, I tried to push, but nobody let me through. I heard wailing, orders being shouted, a whistle being blown. Afterwards I saw an ambulance. When the circle broke open, the man and the child had disappeared.

And so, the crowd dispersed and once again I was caught in the middle of the path, walking forwards, propelled by the city’s movement.

Many years went by. The man died for sure. But he is still among us. Wandering through the streets.

Sophia de Mello Breyner Andresen (1919-2004) is considered to be one of Portugal’s finest poets and short story writers. Her poetry has been widely translated, but her short stories are less well known outside of Portugal. Like her poetry, they are deeply rooted in the physical world, but also have both a spiritual and a political edge to them.

Sally Bolton is an undergraduate student at the University of Oxford where she studies Spanish and Portuguese. Her interest in literary translation was deepened when she attended the summer course, Translate in the City, run by City University, London. During this week she attended classes led by the translator Margaret Jull Costa.