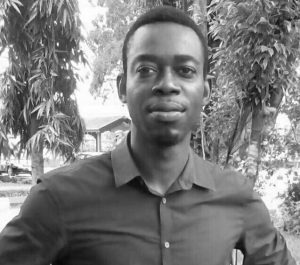 Nnamdi Oguike was raised in parsonages, where storytelling, music and poetry were integral to life. His writing has appeared in The Dalhousie Review and on the literary blog Brittle Paper. His story ‘Preparations for Easter in Ajegunle’ won the first runner-up prize in the Africa Book Club short story competition. He plays the violin and collects world music. In the latest installment of our Author of the Month series, he talks to Casey Harding about the challenges in writing a short story, the connection between music and writing, and his work on a short story collection revolving around the poor in Africa and the world.

How did the idea for ‘Camp in Blikkiesdorp’ come about?

In 2012 I wrote a story set in the Kibera slums in Kenya about a family living in privation, and I liked the story. I went on to write another story set in a different slum in Ajegunle. I liked it, too. So, by this time I was beginning to dream of a short story collection about the poor in different parts of Africa and the world at large. By the way, I have been preoccupied with the theme of poverty. I believe that we are all poor in an existential sense. There is always something, huge or small, that we feel in need of or are deprived of or want relief from. So, it is from this background that ‘Camp in Blikkiesdorp’ sprang out. I had learned about a makeshift settlement in Blikkiesdorp in South Africa ahead of the 2010 World Cup. I felt it was an outrageous episode of South African history that many citizens of the country were evicted and quartered in tin houses just so as not to show the tourists and visitors to the World Cup the dark side of the country. Then the story began to take shape in my head and I found the characters very hilarious. It is a good thing, for me, whenever I see that the poor people in my stories have rich, humorous and fascinating lives.

When you sit down to start a new story do you typically have an image in mind or do you have an idea of the theme of the work?

I hate to sit down to think I am going to write a short story. I think that ideas for literature come in different forms of impact. Some come in miniaturized forms of impact and then I am certain a short story or a poem is most suitable for them. When I am hit by a character or place or an evening stroll or a party or a simple event, I am almost certain that I will be caught writing a short story.

As a poet as well as a fiction writer, how do you react to William Faulkner saying “…every novelist wants to write poetry first, finds he can’t, and then tries the short story, which is the most demanding form after poetry. And failing that, only then does he take up novel writing.’

Well, I don’t think that process describes my history. But Faulkner is certainly right about the short story being the most demanding after poetry. I believe that among the many forms of literature, the short story is second to the poem in impact. The short story is short and miniaturized, but its impact should be enormous like that of a good poem. That is really the big challenge of the short story.

I felt it was an outrageous episode of South African history that many citizens of the country were evicted and quartered in tin houses just so as not to show the tourists and visitors to the World Cup the dark side of the country.

Do you feel any connection between playing music and writing? Does one influence the other? Are there times where you feel stuck writing that playing violin or listening to music helps?

Quite frankly, there are times when I hear or play a good piece of music or sing a song and wish I could write a story as good as the music. I have been told by a friend of a work of fiction inspired by and modeled after Beethoven’s Moonlight Sonata. Yes, there is a useful connection between music and literature. One of the best lessons I have learnt from music is the ternary form of music – the a-b-a form, which represents the introduction of a theme, the contrast, and the return to that theme. I do not think it is possible to write good literature without a sense of this lesson. Even in sentence writing I often think of the ternary form. You cannot keep writing the same thing or in the same way. It is good practice to think of contrasts when writing, to think of silence and speech, happiness and sadness, beauty and ugliness, just as in music. So, yes, there is a strong connection between music and writing.

Are there any authors or poets who have been major influences on you?

I am very susceptible to the authors I read. I can be influenced by almost anything, and so I am careful about the things I read for too long. It is impossible to mention all the influences I have had so far, but I love John Steinbeck, Ernest Hemmingway, Wole Soyinka, V. S. Naipaul, Ben Okri. With regard to the short story, I am constantly mesmerized by Guy de Maupassant and Raymond Carver.

“Darwin Mother had a peculiar taste for silver and dandelions. And in a yellow house down the street, she lived all alone…” Story of the Week (September 5), by C.G. Fewston.

"Apollo only showers acclaim and accolade/ on the hesitant, reluctant/ crop of Pakistan’s 9/11 English language novelists/ with their liberal...