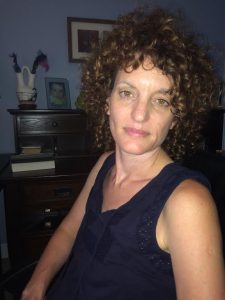 Lorna Brown grew up in Ireland but now lives in Massachusetts with her wonderfully patient husband and her three busy daughters. Lorna’s short stories have appeared in literary magazines such as Congruent Spaces, The Manila Envelope, The Missing Slate, and EWR. In the latest installment of our Author of the Month series, she talks to Casey Harding about using fiction to examine people on the fringes of society, what she gained from attending an MFA program, and the differences in art culture between Ireland and America.

You primarily write stories with male protagonists. Is that something that comes more naturally for you? Have you written stories from a female point of view?

That’s a very interesting question and something I hadn’t thought about until now. I don’t think it was a conscious decision to write from the male POV. It’s the story that controls who the protagonist is, and it just happens that any of my stories suit that perspective. In saying that, I have written stories from a female point of view.

There is also a current of loneliness that runs through your stories. A self-imposed loneliness. In your story, ‘The Taste of Salt’, you write of the protagonist, “As a child, Lou had learned to hate attention. Attention was Hagan shouting at him and pulling him from his seat. Attention was her hands pinching his cheeks and her harsh voice flowing over him.” And in ‘The Long Haul’ you write, “He’d abandoned her in a shady motel with a bag of junk food and a hundred dollars. He’d hoped she could be locked away in the same place as his mother’s long fingers and thin mouth so he could drive through the country alone. But traces of Lucia had gone with him. Her scent was on his fingertips, and her silence on his tongue.” What drove you to examine this character type? Is there any background for your choice?

Was your decision to attend an MFA program a difficult one? What do you feel was the most important skill that you developed while attending Emerson?

No, it wasn’t a difficult decision. I knew I had gotten as far as I could go working alone. The course helped me in many ways but if I had to choose one it would be the clarity of my writing. As I’ve said the past and the present tie very much in everything I write. ‘Time jumps’ in my stories used to be very confusing for the reader. One of the most important skills I’ve developed is the ability to allude to past events without taking the reader out of the present happenings, to tie time perfectly in order to show exactly who the character is.

How do you feel that moving countries affected your writing? Was there a difference in the art culture between America and Ireland?

Ireland is a hard country to compare to any other one when it comes to Art, as it is a place of artists and musicians and so much smaller and easier to access. But when I was in Ireland I was at home full time with three young children and writing was very much a solitary endeavor. In contrast, within a couple of years in USA I was immersed in a Master’s Program. So my situation in each country was very different and it’s impossible to contrast. In saying that, I love the way fiction is taught in schools here. At seven my daughters were coming home taking about narrative and POV and understanding the mechanics of story-telling, not just the story. It wasn’t taught like that in Ireland when I was a kid. There are more jobs for teaching fiction in the US too. I can’t say it’s treated more seriously than in Ireland, since writing is very important there, but it is more serious in the same way all work is here. Irish are more laid back. In Ireland there is less work with teaching but I think Art is celebrated more within the community with Art’s Festivals and readings. At least I had some wonderful experiences with Solstice Arts Group and organizing readings and classes.

As for my writing, moving has definitely helped me. It’s opened up avenues. My novel is set in Boston because the story would not be able to take place in Ireland, or at least I cannot imagine it there. My collection started off in the States too, but because the stories were linked and set in a small town, I realized they suited Ireland much more. I have to say I really enjoyed writing those stories because of the Irish characters. I am very much an Irish writer and proud to be so. I love the dark Irish humor and the stories are so much better for it. In ‘Amends’ the dying father has no respect for the church but gets the local priest to visit when his prodigal gay son returns home. The son is ready to tackle the priest to the ground to stop him from entering. I can’t imagine this happening anywhere but Ireland.

Finally, do you have a ritual when you write? Morning / night, coffee / tea, music / no sound?

During the summer I get up at 6 a.m so I can get a couple of hours before the girls get up. They are 12, 9 and 6 now. If I can sneak time in during the day while they play or read I will. Also after dinner while they watch their movie, I will work. I’m better in the morning so I like to write then and edit and revise in the evening. Basically any chance I get. I don’t bother with music. I like silence. We’ve just moved to a house on a quiet slip road surrounded by trees and I have my own study. That’s my favorite place right now.

"For breakfast, she ate a donut and washed it down with rum." Story of the Week (August 5), by DC...