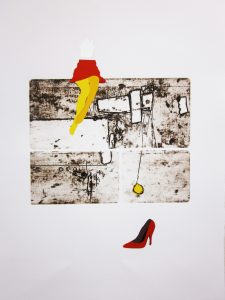 After twenty-six years in real estate development, Mike found he couldn’t drive certain stretches of the west side without encountering whole neighborhoods that hadn’t been there till he’d created them. Cruising along Third or Pico or Santa Monica, he focused on the road ahead but always aware of the black or silver towers clustered at intersections—Vermont, Normandie, Western, Highland—that had once been collections of gas stations, fast food outlets, and strip malls. Mike knew he could make better time on the avenues than on the traffic-choked 10 Freeway; not that he needed to, because lately the drive from downtown to the 405 seemed to take less and less time in his mind. He crossed La Brea then sped through Fairfax, managing to make it all the way to Crescent Heights before hitting a light. Some of these places hadn’t been places at all till Mike had willed them into being. Not alone of course; the long financial boom had focused and concentrated all the money, energy, and ambition swirling around the southern half of California into a few golden square miles of the city through processes too mysterious to understand. Which didn’t prevent men like Mike from recognizing the opportunity. He’d learned to initiate deals on nerve and possibility, sometimes on nothing at all, just air, then keep as many as possible going as long as possible, knowing eighty per cent would fall through in the financing or the tenant mix or the lurch of interest rates. Yet even the twenty per cent remaining could keep a whole staff of architects, engineers and financial people busy if it was the right twenty per cent. The revenue stream was going to be there regardless; why shouldn’t some of it belong to him?

Perhaps it should have surprised him when he decided to sell the firm and go for a degree in neuroscience. In truth it felt less like a rupture or a crisis than a blessing, a natural progression of things. A strange thing happened while he’d watched his professor friend, Joel, use M-R-I scans to investigate the inner workings of human brains. While sections of the gray, convoluted image lit up orange or yellow to show which parts of the subject’s brain were active, he had a vision of himself locking other people into his gaze the way he did in business meetings so that he seemed to dissolve their resistance to his plans. What part of the brain powered the working of pure will that way? What part sent danger messages? The amygdala? Was that the same structure that dispensed impulsiveness and charm?

Once Mike made up his mind to do neuroscience, there’d been no childish agonizing, no time or energy-wasting angst. Maybe he’d been bored but maybe not; maybe it was just the fun of going for something new and unfamiliar. Mike’s wife regarded such control as a character flaw. Ex-wife, he reminded himself. Control wasn’t a bad thing, it was a form of agency, like brains, energy, or money. With it, you could ease the world’s hurts a little, as he’d done when he established the spinal disease pavilion at Cedars-Sinai. Or remedy its ills a little, as when he’d funded scholarships for those kids from east L.A. Obstacles were a form of agency too; they made you think harder. Alright, maybe some of it was boredom. He turned off the 405 freeway onto Century Boulevard, where high rise chain hotels alternated with gas stations, rental car lots, other low-value land uses awaiting someone to come along and realize their promise.

Once Mike made up his mind to do neuroscience, there’d been no childish agonizing, no time or energy-wasting angst. Maybe he’d been bored but maybe not; maybe it was just the fun of going for something new and unfamiliar. Mike’s wife regarded such control as a character flaw. Ex-wife, he reminded himself.

Whoever that was, his recent decision insured it would no longer be Mike. Nor would it be Claire. For a while he’d hoped his daughter, now returning from an art-buying trip to New York, would follow his lead, something he’d encouraged by giving her a job the summer before she went east to study art history at Brown. He circled the LAX terminal loop once, then twice, wondering whether the three cops standing in front of the International Terminal might have noticed his silver Miata on the second circuit. Did they suspect something? Third time around, they’d have him made: successful businessman, middle-aged, (still trim, no paunch, good muscle tone) but too untanned, too precisely dressed for Hollywood. Oil executive, banker, or some kind of independent entrepreneur. Having typed him, they’d offer a friendly suggestion: “You know, sir, you could save yourself a lot of trouble if you parked that car and met your party inside.”   And how to respond?   But I have to do this. “And why is that, sir?” Because she’s my daughter. (Which made no sense.) Officer,imagine it’s your daughter, all grown up, returning from a business trip back east. Wouldn’t you want to be there for her? (Better, but it needed something.) Because she knows how to make a grand entrance and I have to be there for that. (Which sounded sappy.) Because it gives me some kind of pleasure to keep cruising past the crowds till the one face I came here to see emerges from that mass of strangers. (Which made even less sense, but what the hell.) Because I don’t know why. (Which was at least accurate.)

On his fourth circuit he slowed the car to a creep, trusting the cops wouldn’t be there, watching the second door of the United terminal, the third, the fourth. He glanced in the mirror and caught a peek of Claire’s face, then lost it behind the blue uniforms of a flight crew. A second later she emerged head to foot, looking the way he’d hoped in a gray sweatshirt and pink miniskirt, her feet stuck sockless into sneakers, trundling a wheeled suitcase behind her. Her right shoulder sagged a little from the weight of a shopping bag. He could tell she’d spotted him when she picked up her step and flashed her wide smile with the full lipped, heavy-browed face that could be cute one moment, clownish the next. Relieved at being able to stop, he popped the trunk as she hurried to the car, listening till he heard the bump of her suitcase and the solid, satisfying slam of the lid.