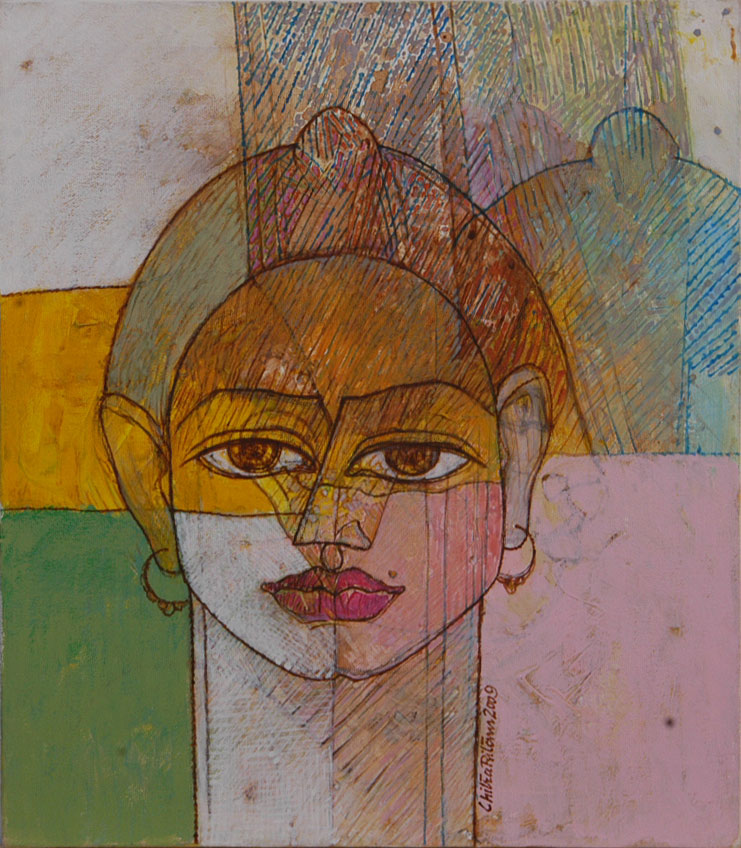 One of my favourite childhood reads was an abridged version of Bankimchandra Chatterji’s novel, Anandamath (The Abbey of Bliss). It was a prize my mother had won in school, one of a stash I had recently discovered in my grandparents’ home. The book’s opening image, of a couple and their infant daughter arriving at a deserted village struck by famine, was so utterly cinematic, I could visualise the entire panorama as if it were projected on a 70 mm screen – two tiny dark silhouettes and an even smaller one, slowly emerging against a fuschia-red-streaked horizon, in the middle of a necropolis.

In my daily battles with this army of creepy crawlies I would sometimes apply the guerrilla tactic I had picked up from Anandamath. I would lure the ants by leaving a residue of syrup in empty earthen cups after eating the sweets from them and douse it in big splashes of water once the unsuspecting battalion had climbed in, much the same way as the ragtag army comprising rebel monks rushed in to occupy the bridge after the British army staged a strategic retreat and were slaughtered, en masse.
I was a little older then, about seven. My mother and I lived in a run-down two-room ground-floor flat off a noisy and congested marketplace in Krishnanagar, where she taught philosophy at the local state-run school for girls. During monsoon, water would stand in the tiny courtyard. Each trip to the bathroom, secluded from the living area, across a damp, un-cemented patch, was an excuse to kick the puddles and get mud on my feet. Inside its ill-lit dingy interiors was a little republic of house ants, spiders, annelid worms and other animals. The scorpions were, potentially, the deadliest. I would keep a rubber sandal ready to squash them, just in case they crawled out from inside the folds of the bunched-up sari border used to plug the hole at the bottom of the water enclosure.

In my daily battles with this army of creepy crawlies I would sometimes apply the guerrilla tactic I had picked up from Anandamath. I would lure the ants by leaving a residue of syrup in empty earthen cups after eating the sweets from them and douse it in big splashes of water once the unsuspecting battalion had climbed in, much the same way as the ragtag army comprising rebel monks rushed in to occupy the bridge after the British army staged a strategic retreat and were slaughtered, en masse.

I particularly liked the hoydenish character Shanti, who dressed like a man and bashed up the predatory Muslim soldiers. I was totally taken by her turban, which conveniently camouflaged her cascading hair and proficiency in martial art. To me Shanti was a homegrown version of Modesty Blaise, the Colt .32 revolver-wielding comic strip character who could rebuff several men with a single strike of her absurdly high-heeled shoes. Her adventures, serialized in three-frame installments in a local newspaper, were pretty much the first thing I would read every morning.

I obviously had no idea that the brotherhood of monks to which Shanti belonged was one of zealots on an ethnic cleansing mission. I was quite taken by the rousing song Vande Mataram, a paean to Mother India sung by the rebel monks in Anandamath, which we learnt at school. I could not have figured that the demand for autonomy by the ascetics in Anandamath had an essentially exclusivist, Hindu nationalist character.

It was only in recent years, when I began reading up about the life of C19 reformist Kaliprasanna Sinha (1840-70), and looked up a few of his contemporary writers of the Bengal Renaissance – members of high-caste, affluent, Hindu elite, almost without exception – that I realised the condescension and skepticism towards Muslims in Anandamath was perhaps symptomatic of a general sentiment at the time. The xenophobic antagonism displayed towards the Muslim soldiers by the ascetics waging a ‘just war’ in the novel, if taken as the author’s personal view — which is open to conjecture — could have been inspired by a moral concern for the preservation of Hindu culture. Following the initial success of the Sepoy Mutiny in 1857, a lot of Hindu homes were exposed to rampant plunder and vandalism. Those memories were still fresh and hurting, in 1882, when Chatterji serialised his novel in Bangadarshan.

Hindu hermits, a cult of Muslim nomadic and marginalised folk performers and sufi saints banded together to mobilise the monks’ rebellion of 1770-71 against East India Company. Chatterji appropriated the rebellion, turning it into a Hindu-nationalist crusade to end Turko-Afghan rule in Bengal. Towards the end of the novel, the white sahib is prophesied to take charge until Bengal is ready for self-rule, as if by a divine decree.

Whether Chatterji — who had a day job as a deputy magistrate during the Queen’s rule — was a closet colonial with an agenda of turning India into a Hindu Rightist state was debated in the public domain in 2006, in the 125th year of Vande Mataram. The song — chanted by the rebel monk Jibananda as part of the orientation rituals of a civilian into the cult of the rebel monks in Anandamath — was being used as a rabble-rousing ditty by revolutionaries fighting for freedom from British rule ever since Rabindranath Tagore set it to tune and sung it for the first time at the Calcutta convention of the Indian National Congress in 1886.  Chatterji’s paean to the motherland, imagined in the form of the demon-slaying, ten-handed Hindu Goddess Durga who would deliver the distressed from evil, supposedly helped work up a patriotic zeal. Tagore himself was uncomfortable with the religious, slightly militant, overtones though. He wrote to the charismatic young Congress president Subhas Chandra Bose, questioning the premise of asking Indians of different faiths to sing in praise of a Hindu goddess in the name of patriotism.

When I first read Anandamath, I was particularly intrigued by the term ‘nedey’, as the rebel sanyasis would mockingly call the Muslim soldiers. ‘Nedey’ or ‘neda’, as I understood it, translated as ‘shaven-headed’ or ‘baldy’ in Bengali. In fact, it was a term older girls in school had started calling me by. My mother had my head shaved during the summer vacation. Running a blade against a tender skull was supposed to have the same effect as hoeing a virgin plot of land – facilitate better circulation of blood and oxygen at the base. It happened the way my mother wanted it, except that my hair, now less than a centimeter long, stood on end, like millions of dark pins stuck to a dark velvety pin cushion. Football legend Pele came to play Mohun Bagan Club in Calcutta that year. My seniors told me Pele and I could well pass off as long-lost brothers.

I was a little sad that I now looked like a golliwog, a character I followed in the ‘Noddy’ series not understanding its societal context and only knowing it as a character with unascertainable sexuality, but even still I was not altogether crest-fallen. My mother had copies of the literary-cum-current affairs magazine ‘Desh’ from the late-1960s, bought with the money earned from her first job and bound together for keeps. In those capacious volumes, I would read about Martin Luther King Junior and Jimi Hendrix at Woodstock. On Sundays, at noon, I would listen to Musical Band Box on the radio and try to sing along with Aretha Franklin.

Innocently, and with my newly-acquired quasi-Afro hair, I had already begun to fancy myself as some sort proud but marginalised entity.

Back home in Calcutta, Baba would bring home copies of the ‘Guardian Observer’ from his workplace when they were about a week old, after the termination of their shelf lives. He was an information officer with the British High Commission in Calcutta and had access to a range of British magazines. Like me, he too would often respond emotionally to real-life events taking place in a part of the world so far away that these could have been happening in the realm of fiction.

One such was the imprisonment of the Irish Republican Army leader Bobby Sands and his hunger strike in protest of the Representation of People Act 1981, barring prisoners from contesting British elections.

“…only/ the blood on the moonlit sand/ black and soaking: the laughter/ of a lion’s ribcage left.” Weekend poem, by Isaac Nowell.

"It’s raining again./ they don’t tell you about the/ rain/ before you come/ or the cold or the clouds..." Weekend...