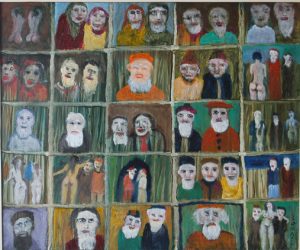 He’s melting, this man who was once my father. Flakes of dead skin stick to the loveseat.

There’s a glass of water in his hand, another on the table next to him, and he’s sucking them down one after another while he talks about doing a belly flop like that would be the best thing in the world right now. For him, probably. Me? Just let me turn up my headphones, turn them up so I don’t have some faraway voice saying, Nell, baby, it ain’t much unless you let it be. Maybe we’ll go back to the playground and sit on them swings, go down them slides. But right now we can’t. They need you. One day you’ll remember and think about how you ain’t let it be anything at all. Lord willing, you will.

The television room smells of sweat and piss, so I open the back door and let the cool wash the scars across my cheek. I take a breath. You can see the barn clearly from here, stained wood halfway between warping and cracking, a single light noting the double doors. The pine trees stand guard. I know my dad wouldn’t have it any other way.

We’re watching The Fugitive, but Dad actually falls asleep long before the credits. When I look up a glass is turned over in his hand, the water dripping down his sweatpants.

He doesn’t stir. I ease the glass from his grip and throw an extra blanket across his chest, roll it up under his chin. Then I crash against the couch and turn my headphones up until my ears cry.

When we left the hospital, a doctor named Jody tried to tell me what to do. Not for the first time, neither. Insulin, make sure there’s some. The wounds, clean them. Cream, for his feet. How much will all this cost? My first question. Really, it was the only question. Dad needed specialists and specialists needed money, and why was I the one making these decisions? I was just the younger daughter, the scar-faced one, the girl they kept hidden away. Just hearing Jody’s voice was enough to make me think of my mother and sister and how they weren’t here.

I remember my dad sprawled across the backseat, the only hair he had left pushed wildly to one side. We were driving home and he’d been asking about the barn and if I was taking care of them? No, I wanted him to know. I was not. My fingers ran across the card in my pocket, the one signed “Ruben Phillips.” I’d pulled it out at an intersection to inspect it, careful to hide it from Dad’s sight. For a moment, I even thought about showing Dad the card. There was no use, though, arguing about these things with him. Wasn’t even worth trying.

Dad was moaning when we veered into Rite Aid and as I stepped out of the car, he offered to pay for the prescriptions.

“You need enough for food,” he’d said. I knew he didn’t mean cereal and pizza.

A man had exited Rite Aid just then, carrying a small plastic bag and a jug of milk. His daughter was piggybacking. She had a hair twisty in her hand and was trying unsuccessfully to snap it against his neck. It made me recall Saturday mornings when I’d been younger, when the smiles came freely, when my dad would take me to a jungle gym that sat on a hill above a pond. He’d send me to the swings before vanishing with his bucket. Sometimes I waited hours for him to come back.

“Club team wants to travel this year,” I’d told Dad. The father and daughter had been getting into their Camry. “I told Coach he’d have to take me since you can’t.”

I remember Dad’s hand sounded like sandpaper against his face. Were those tears he’d been wiping away?

I’d been staring at the ground when a red-haired woman in heels hurried out of Rite Aid and I could hear the little girl laughing, yelling Momma, Momma, look what I did! Look! Dad was saying something but I wasn’t listening. I watched the woman climb into the passenger seat, saw her daughter on her lap. The car pulled out and past us, some Disney Sing-Along wafting into the night.

Inside Rite Aid, I punched a box of Cheerios again and again until they spilled across the aisle. Some kid with a rattail asked if I needed someone. Some help. I handed him the prescriptions. He watched me like a man would a rabid animal, untrusting, his eyes dancing from my scars to my hair, to my shoes and back again to my scars. I clawed at the shelves and started screaming about lunches for school and who was going to make them? Who was going to get up and make them now?

The following morning Jody from the hospital comes to the house. We sit at the kitchen table and she asks for coffee. I fill two glasses of water and while she doesn’t make a sound I can tell this frustrates her. The bags beneath her eyes are pulling at her skin, cheeks sunken like mortar wounds. Worked through the night, you see, but wanted to check on him before she went home. She expects a thank you for it. I play with my lacrosse stick and put my headphones on instead. Jody’s eyes level at me as she takes a long breath, waits.

“And this next set of treatment? These surgeries?” Jody hands me another piece of paper. “He definitely needs ‘em, Nelly.”

The bank, I ask, what about the bank? Jody shakes her head. More bad news spills out of her, a whole lot of big numbers and weird words that I don’t quite understand.

Finally, she says something about our house, the mortgage.

I take off my headphones to give myself a moment to think, but SportsCenter is playing in the back room and this is the fourth time I’ve heard it this morning. Dad must’ve fallen asleep again. Jody taps her foot. She waits patiently until, finally, she prepares herself to speak.

I refill my glass until the water sloshes against the edge. It’s a game, really, seeing how close you can push it without spilling. I’m spinning the glass on the table and Jody has her fingers steepled, her eyes on the pink flaps of skin across my cheek. Before she can ask what I know she’s going to ask, what everyone always wants to ask, I let the glass spill.

In an instant, Jody leaps back and grabs for her bag. She’s cursing, frantically wiping the floor with paper towels, her bangs falling over her eyes. I watch. The empty glass rolls across the table.

“It was a snake.” The water puddles at my feet. I don’t move. “In third grade. He told me I could hold him. He told me it wouldn’t hurt me.”

Jody isn’t listening. She’s rambling on about cancer and diabetes and gallbladder disease and all the side effects and how, maybe, just maybe, we might need to sell the house, we wouldn’t be the first, and when she dumps the paper towels into the garbage and walks to the kitchen sink, her face reeks of pity. She asks about the rest of our family and I think about our cousins. Can already hear the excuses on the phone, the plans they can’t break, the weatherman and his storms, and the money, oh the money is really tight right now, Nelly. My sister, Paris, she can’t leave Ohio, and my mother, of course, and I can’t really blame her for disappearing, either.

Water drips off the table. Watching it is mesmerizing in a way. Like a heartbeat it slows and struggles until, finally, it gives in and the breathing stops.

"The subject-matter often teeters at the very edge of what society will accept, and very occasionally jumps off into the...