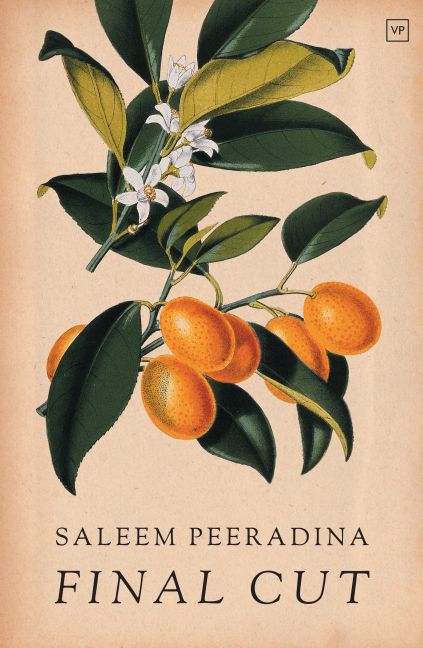 In his third collection of poetry, ‘Meditations on Desire’, Saleem Peeradina considers what happens when words shift from abstraction to describing the object of the poet’s affection:

Only in the abstract
can words attain
such luminosity.
On contact with the flesh
they burn up.

Here, then, in Peeradina’s fifth collection, ‘Final Cut’ (2016), are many poems that are not abstract at all, yet luminous, like his ‘A Rumor of Birds’:

One watching through a telescope will see them
scatter like flakes of pepper against lunar light;
but mostly, these night-travelers will pass invisibly, afloat
on a murmur.

In ‘Final Cut’, Peeradina is both painter and docent. With a confidence in his own voice, he strides into this dual role. He creates a series of still life paintings, and then addresses the objects in his paintings through a series of narrative interjections. Simultaneously, he manages to engage the attention of his audience: you can almost sense him nudging you to look up from your phone and observe the ordinary in your own walk through life. Each reader is made aware of their own ability to be mindful of the objects and creatures they encounter.

In 2003, I spent a few days with the poet and his wife, in their home in Michigan. I remember the mornings – I would rise from a rich, kind sleep to a cup of brewed Indian chai, made at daybreak and set out for us on the kitchen table by Peeradina. That setting of the cups – their simplicity and beauty – seemed to exemplify the poet and his work. At the time he had finished ‘Meditations on Desire’, and the inner life of passion was juxtaposed against the brevity of those poems. There was a restraint and simultaneous generosity in that book that followed the tradition of Indian devotional poetry and song.

In ‘Final Cut’, he reverses this brevity for most of the book and uses language which is lush and full-bodied, like the flesh of the still life fruits. Yet, even when there is an excess of language and explanation, these poems hold a devotional quality of their own. His familiar voice rings out, and it is a voice that holds no bitterness. Even without a named god, by praising the ordinary beauty of the forms around us, we are connected to a non-abstract mindfulness, and to creation itself.

Thus, Peeradina gives the birds or fruits a voice that ties in with that mindfulness that is so especially his. Making us pause, he starts a conversation between his art and his audience, bringing us into his creative meditation. Here is ‘Mourning Dove’:

These poems hold a devotional quality of their own
The Pulitzer Prize-winning poet Gregory Pardlo speaks about the urban dweller’s desire to bring nature into the living space, to establish continuity with inside and outside spaces, specifically with reference to his home in Brooklyn. Saleem Peeradina’s work is drawn to a similar sensibility. He refers in his introduction to the influence of the naturalist E.O. Wilson, whose non-fiction book ‘The Ants’ won a Pulitzer Prize in 1991. ‘Final Cut’ is very much a book paying homage to the naturalist poem. And, despite many decades spent in rural Michigan, Peeradina is, to me, still an urban poet. He grew up in Bombay, like I did, and this coming together of the naturalist and the urban poet is wonderful, especially since it is conveyed through Peeradina’s original poetic voice and idiom.

Every day for years, teaching at Siena Heights University in Michigan, Peeradina drove through farmland, so it is fascinating that the texture of his poems still intimates the urban poet whose lines in ‘The Old Neighborhood’, part of his fourth book, ‘Slow Dance’ (2010), stay with me:

Though twenty-five years of changing skies
Have kept our sense of place intact,

Two decades and a half of lost tracks and
no contact have piled up like unread mail brimming
with news: postscripted memories.

If we attempt to situate ‘Final Cut’ in a school of American poetry, the urban pastoralist tradition seems partly fitting, but not all-encompassing. Peeradina is able to change form and narrative structure to hold multiple identities and give his work a rich breadth. In ‘A Rumor of Birds’ you feel the joy of the optimistic philosopher:

…you live, love, breed, and die at full tilt
claiming only a bit of earth and infinite sky.

At the same time Peeradina, the botanist and observer of birds, continues to write poems that have connections to his earlier work. There are the inner monologues of ordinary people as they evaluate their lives and attempt to give their experience a narrative wholeness. The prose poetry of these monologues is dense with detail, and similar in that sense to the fruit poems. And then, as if to break free, he throws off that density and with an easy movement inward and outside, stretches consciousness from an ordinary piece of paper to one that flies far out into an Escher-like drawing board of a universe with ‘The Lesson’:

Fold this sheet
to fashion an origami pigeon and release this messenger bird
into the sky. It will quickly reach a vanishing point flying among
billions of other winged creatures, each carrying its own universe.

Peeradina is distinctive in his ability to remain the devotional poet, perhaps because of his deep knowledge of traditional devotional poetry and his success with crafting the poetry that became ‘Meditations on Desire’. At the same time, for me, it is when he speaks of something real and immediate, weaving in his humanity into the everyday, like the father cooking eggs on the Tavva, that he engages me the most:

The children in the household say: Dad, you make the best fried eggs
with crispy underside and edges but the yolk still soft. I glow with
pride over my contribution. At day’s end, I cool down, to be warmed up
again in the morning light. My life is for the long haul. I will go from
hand to hand, age to age. I am meant to outlive mortals. I am iron.

He reminds me of strength, of the passing of time, the interconnectedness of our world and of my own journey to America, to my parents’ kitchen with my stepfather’s delicious fried eggs, not so far from Peeradina’s cups of chai, and the kindness of his hearth, ever present in his poetry.

Leeya Mehta writes poetry and fiction. She grew up in Mumbai and went to Oxford University. She now lives in Washington DC. She is the author of a chapbook, ‘The Towers of Silence’, and winner of the 2016 Readers’ Choice Award from DistrictLit. She is guest poetry editor at Origins Journal. Her poems have appeared in the Beloit Poetry Journal, Fulcrum, Poetry London, Vinyl Poetry and other publications. She is currently working on a novel, ‘Extinction’.

“One day, I will escape, though, perhaps over the rooftops.” Story of the Week (March 10), by Medardo Fraile. Translated from the Spanish by Margaret Jull Costa.

Author of the Month: Awais Khan

"Writing can be lonely business, but if you have friends who write too, well that changes the picture completely." Awais...