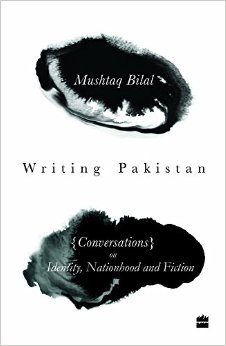 Mushtaq Bilal’s ‘Writing Pakistan’ is a groundbreaking (in the sense that no book of this kind, focusing solely on Pakistan, has ever been published before) collection of interviews with ten “of the most distinguished names in Pakistani fiction in English today.” Bilal begins his introduction with what turns out to be a characteristically bold examination of what he refers to as a “boom” (his scare quotes) in Pakistani English fiction.

This “boom” — an apparent “flourishing” of Pakistan’s English-language “music, art and literature” — is, on closer inspection, perhaps more of a publicist’s wilful exaggeration than a reality. As Bilal drily notes, “one might consider words like ‘boom’ and ‘flourishing’ as overstatements.” He proceeds to point out that “there is not a single publishing house in Pakistan that specialises in English-language fiction”, while Kamila Shamsie suggests that “even the most engaged reader in Pakistan would be hard-pressed to name more than a dozen writers from Pakistan writing English-language novels.” In his interview with Bilal, Musharraf Ali Farooqi rather inadvertently illustrates Shamsie’s point by arguing that “at the moment… we only have six or seven [English-language fiction] writers. We don’t have thousands of writers whose writings can usher in change. It won’t happen.”

If the “boom” in “Pakistani English fiction boom” quickly becomes problematic, so too does “Pakistani”. No reader should be surprised to discover that Pakistan is, in many ways, itself a fiction —  a country composed of myriad diverse identities. Significantly, “identity” is the most prominent word in the subtitle of ‘Writing Pakistan’, and identity is perhaps the central connecting thread running through all ten interviews. One of the collection’s great strengths is its willingness to give a voice to groups that have previously risked being written out of Pakistan’s history: Bilal’s first interviewee is Bapsi Sidhwa, perhaps best-known for writing from the perspective of the Parsee community. In Sidhwa’s own words, “Before ‘The Crow Eaters’ [her debut novel], Parsees had never been written about in fiction. Never.” Foregrounding her interview seems to represent a very conscious decision to explore alternative Pakistani identities.

Continuing that theme, Mohammed Hanif draws attention to the difficulties faced by the Baloch people (“If you are a Baloch young man, your average age is reduced by half automatically”) and Pakistan’s Christian community (“Many Christians over the past forty, fifty years have given their children Muslim names so that they won’t have to give their identity so easily”). Bilal Tanweer’s interview sheds light on the Pakistani Left, many of whose writings were “destroyed… by the Left themselves because the state was coming after them.” Uzma Aslam Khan, meanwhile, suggests that there is no one without “a hyphenated identity… Everything — whether it is a language, whether it is a whale, whether it is a poem, whether it is a country — is a hybrid. Everything is a mix. And xenophobia stems from an idea of purity, of an identity that doesn’t really exist. There is no such thing as pure identity.” Even in the land of the pure.

Everything is a mix. And xenophobia stems from an idea of purity, of an identity that doesn’t really exist. There is no such thing as pure identity.
It’s tempting to quote the Zimbabwean novelist (and professional enfant terrible) Dambudzo Marechera, who once answered an interview question about his political views with, “If you are a writer for a specific nation or a specific race, then fuck you.” While the interviewees in ‘Writing Pakistan’ are generally less confrontational than Marechera (but not always: Bilal Tanweer is quick to dismiss one question as “bullshit”), most possess the same deep-rooted feeling of unease at being perceived as representatives of their nation. “I don’t think writing from Pakistan is somehow meant to represent Pakistan,” says Mohammed Hanif, a statement which Shehryar Fazli elaborates on in the book’s final interview: “Speaking for a particular people or a particular nation… undermines the concept of multiplicity, pluralism and individuality, which I think are the fiction world’s greatest assets.”

Mohsin Hamid advises against “dehumanizing people” by reducing them to an idea. The writer’s real task, according to Hamid, should be to “recomplicate what has been oversimplified.” He also discusses the importance of “trying to destroy the binary” between ‘the West’ and Pakistan, and it seems significant that many of the influences cited by the interviewees in ‘Writing Pakistan’ are not Pakistani. In the collection’s first interview, Bapsi Sidhwa cites novels by Dickens, Tolstoy, V.S. Naipaul and Mark Twain as the most noteworthy formative influences on her writing. In the collection’s final interview, Shehryar Fazli mentions Raymond Chandler and Dashiel Hammett, plus The Godfather and China Town (perhaps there’s a study waiting to be written exploring Hollywood’s influence on contemporary South Asian writing). All ten interviewees have spent significant periods of their lives abroad (in Britain, Canada or the US), and a majority graduated from American or Canadian universities.

This diversity of influences isn’t necessarily a recent phenomenon: Aamer Hussein points out that “Chekhov was a big influence on Ghulam Abbas and Manto”, with the caveat that both Abbas and Manto “are very much located in their own realities.” Going back far beyond independence, “Pakistani” writing has been engaged in a series of dialogues with other countries and cultures.

What emerges from ‘Writing Pakistan’, taken as a whole, is a sense of what Kamila Shamsie refers to as “the contemporary complexity of Pakistan.” Bilal’s collection of interviews is an admirable attempt to navigate that complexity, succeeding in its mission “to provide… writers with a space in which to expound and elaborate … views that have not been articulated in their works”  and offering an unparalleled overview of contemporary Pakistani fiction in English.

As with all good books, the questions it poses linger long after the final page. “What appears strange and complex becomes even stranger and more complicated once you begin to investigate it,” as Bilal Tanweer writes in ‘The Scatter Here is Too Great’, “That’s the true nature of the world.” ‘Writing Pakistan’ deserves praise for the thoroughness of its investigations into Pakistan’s English-language literature scene, in all its strangeness and complexity.

"Being a woman, I think that feminism cannot be divorced from my art." John Robert Lee interviews Shallon Fadlien.