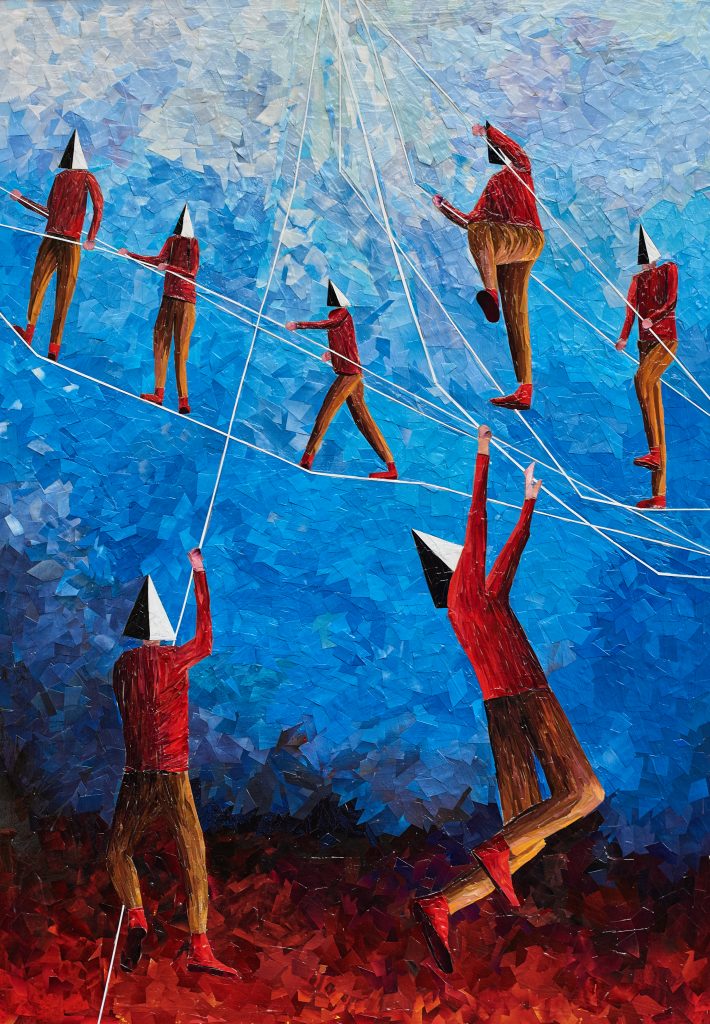 Nobody wants to go to Hell by Albin Talik. Image courtesy of the artist.

The lists gave me strength and a sense of tranquility like other people would get from prayer, alcohol, drugs, therapists, cigarettes or shopping. I knew that both drugs and psychotherapists were more socially acceptable than lists. But then again lists, especially lists of this kind, are rare. No-one apart from me writes so many lists, no-one arranges, no-one nurtures them – at least as far as I’m aware. Supplying your body with a certain amount of alcohol and nicotine in order to unwind or take your mind off things would seem to be somehow acceptable. But someone who needs nothing more than a piece of paper and a pen to calm their nerves and recover their inner poise is viewed as peculiar. Neurotic. Something which, by the way, I’m happy to be if that’s also what Woody Allen is. Neurotic as a matter of principle, as it were. I think that Woody would like my lists.

I can’t remember when it all began – my collecting of lists, my collection of lists, my passion for them – even if I ought to, as I was already able to write by then. Where did the idea for my first list come from? Where, with what, on what and above all why on earth did I write it down? I’ve been told twice by Flox that I should discuss the whole thing with a therapist – once in earnest, pleadingly, once during an argument. The first time, I didn’t talk to him for a week. It was more difficult for me than for him. I was working from eight a.m. until nine in the evening, thirteen hours with coffee and sandwiches at my desk. Afterwards, I’d go to a late showing at the cinema. I saw the same David Lynch film three times that week. I tried desperately to understand its logic. A distraction, of sorts. When I got home, I would turn to my lists – I wasn’t talking to Flox, you see – and begin to edit them, crossing out, making additions, copying out, sorting, arranging and researching until I fell asleep over the lists, which I would then attempt to smooth out the next morning and would end up having to rearrange all over again. His rejection of my lists felt like a rejection of me and the fact that he couldn’t comprehend this – for me – perfectly logical consequence caused my conviction that he was the man that I wanted to go on living and travelling and being with to falter. For quite a while afterwards, Flox said nothing more about my lists. That was once we’d not exactly sorted things out, but were at least back on speaking terms, tentatively at first and then as though those days without talking had never happened. In time he began, though initially still erring on the side of caution, and then more and more often because it relaxed us both, to poke a little fun at them. It was a kind of banter, and only once during an argument did he tell me for a second time “You’re off your rocker! You and your lists! You know what, you could do with a serious course of therapy!”

The lists gave me strength and a sense of tranquility like other people would get from prayer, alcohol, drugs, therapists, cigarettes or shopping. I knew that both drugs and psychotherapists were more socially acceptable than lists. But then again lists, especially lists of this kind, are rare.

On one occasion, I did in fact see a therapist for that very reason. I must have been about eleven or twelve, my mother had dragged me there. I can remember that. And I can remember exercise books that I would cram with scribbled lists and confine to the vault, a lockable compartment in my writing desk. I was proud of that desk, it made me feel like a real writer, a writer with lists and a secret compartment. I used to wear the key on a leather band around my neck. The other girls would hang colourful little stones or Mickey Mouse pendants on that sort of band. I even wore it at night. In the evening before bed, but after I’d brushed my teeth, I would sit down at the desk, specially cleared of all debris, unlock the compartment and add to the lists, compile new ones, revise the old. When I was finished, I would lock them up and rehang the key around my neck. That was what seemed to have got my mother worried – the fact that I not only insisted upon writing these lists, but that I also had to lock them up, conceal them. Frank wasn’t bothered, very little worried him. He waved such matters aside, literally: he would dismiss my mother’s concerns with a floppy-wristed wave of his hand, a trademark gesture that would later strike me as being a bit camp, “Oh, let her be.” Frank wanted to be let be and let others be in return. At first, my mother was delighted by the lists, that I can remember as well – how I would run out of my room, down the stairs and into the kitchen to show her a new list, how she would pick me up and put me on her lap (so I must have still been quite young), push her tea to one side and go through every item on the list with me, even making suggestions for new additions. Some I incorporated, other lists were mine and mine alone, not open to amendment. It used to make her laugh. When did she begin to worry? When the lists didn’t stop? When I hit puberty? Had she hoped that it was just a phase? That I would grow out of it, like I did of being frightened of the dark? She didn’t tell me where we were going. She’d picked me up from school and said I had to go to doctor. Did I ask her why? Did I trust my mother so blindly that, aged twelve or thirteen, I was still simply accepting her decisions, the course that she set for me? We got off the bus at Kapuzinerstraße and I followed her, without so much as a question, past the bookshop, the Italian restaurant, the kiosk, and the pet shop where we used to buy Natascha’s food, talking all the while about the new biology teacher who was so fat, as fat as a whale. And then I remember the grey metal sign at the entrance to the building:

"We think of ourselves not as artists but rather as straight shooters with a distinct, discerning eye for the world...