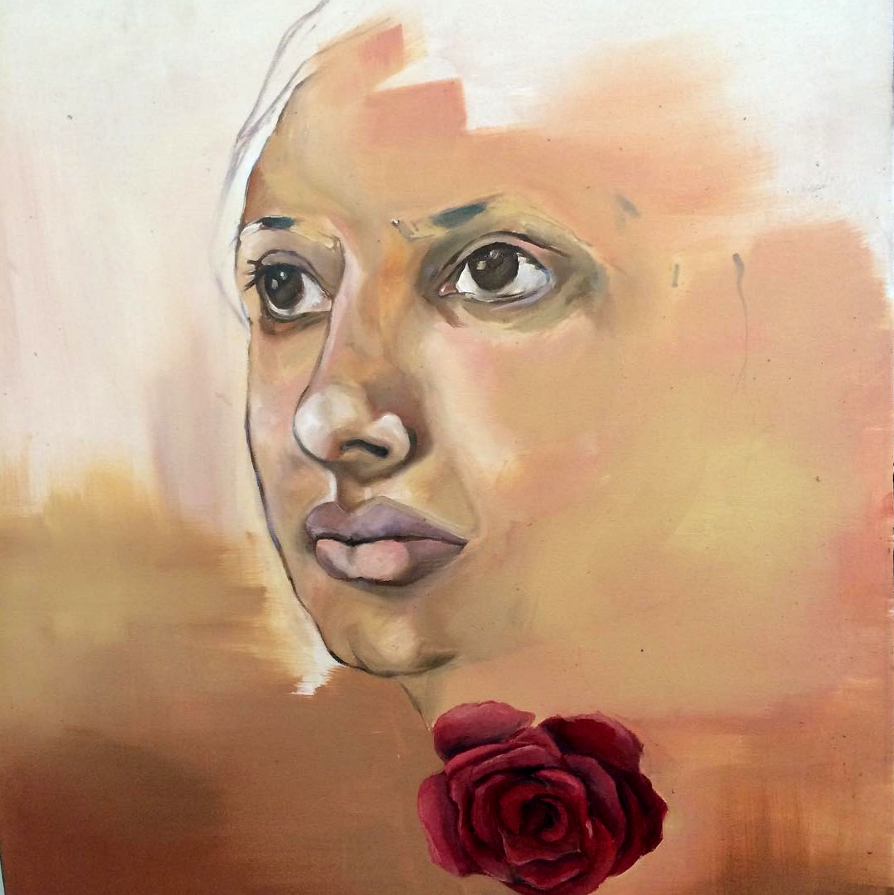 Lump in my throat, by Anum Lasharie. Image courtesy of the artist

Spare me this Arab love for dictators tonight.
Come closer, listen—Warda is singing,
Fi Yom Wi Leila. This day, this night, let us.
Push this talk of the land to the side. Spare me
this Arab love for conspiracy tonight. Lower your voice
to the sound of my pupils. Look at me. Let’s music
instead, let’s cigarette, let’s wine and laughter. Let’s call
friends. Remember how our mothers used to serve
cigarette packs on trays to their guests?
Fi Marlboro, fi Viceroy, fi Gitanes, they said.
Every house had them cigarette trays. Some nights, the politics
settled with the ashes, and the jokes came, the clapping,
the Allah Allah rising with the smoke, the dancing. Time tortures
everyone. Let’s heal a little. Ask me if I could ever
love again. Let’s exaggerate. Ask me if there will ever be
arms like mine. Warda is singing she’d been missing you
long before she’d met you. I missed you before I met you too.
And now, habibi, even more, even more.

Zeina Hashem Beck is a Lebanese poet. Her first collection, ‘To Live in Autumn’, won the 2013 Backwaters Prize. Her second collection, ‘Louder than Hearts’, won the 2016 May Sarton New Hampshire Poetry Prize and is forthcoming in April 2017. She’s also the author of two chapbooks: ‘3arabi Song’, winner of the 2016 Rattle Chapbook Prize, and ‘There Was and How Much There Was’, a 2016 smith|doorstop Laureate’s Choice, selected by Carol Ann Duffy. Her work has been nominated for the Pushcart Prize, Best of the Net, and the Forward Prize. She lives in Dubai, where she has founded and runs PUNCH, a poetry and open mic collective. Zeina’s readings often have a strong performative quality, and she has participated in literary festivals in the Middle East, the United Kingdom, and the United States.

Poet’s note: Warda refers to Warda Al Jazairia, a well-known Algerian singer. “Fi Yom Wi Leila” is the title of one of her songs, loosely translated as “in a day and a night.”

“I was envious of this open and free culture, this nonchalant attitude toward the body and sex. I wished I was not born and raised in such a straight-laced society.” Rudy Ravindra remembers his escape from an arranged marriage in India and his first love in the United States.

The Threads That Pull

"She stood over the pancakes and knew that there was a cost for pleasure for a woman like her, living...