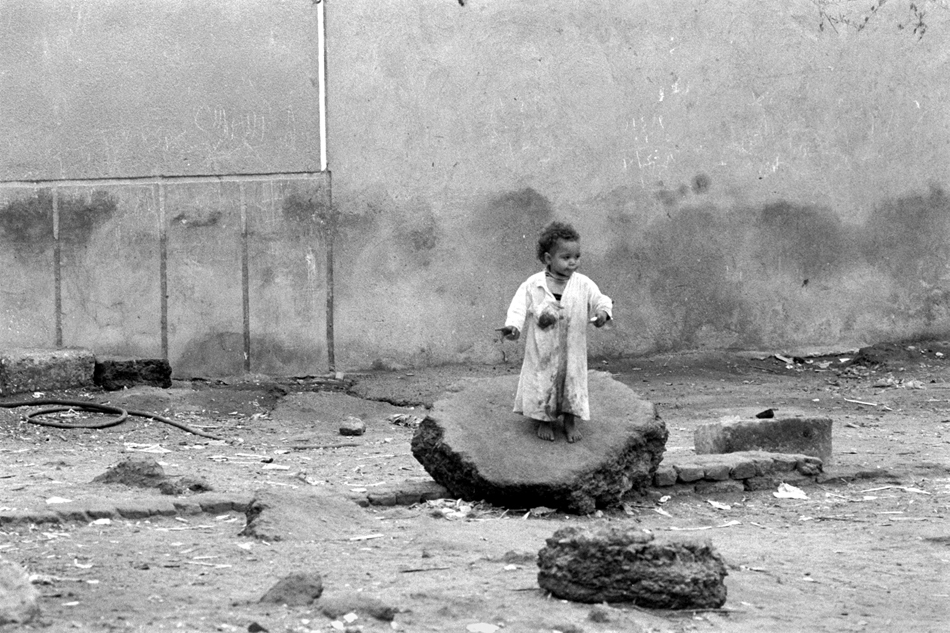 The taxi that takes me to the station so early in the morning doesn’t have any headlights, any meter, not even a floor in some places. Too bad if it’s still dark. Too bad if I don’t feel like talking, don’t feel like arguing about the fare. Too bad if my shoes are resting on a soft plastic carpet bending under the weight of my legs and dangerously grazing the asphalt. The battered roadway spares us no bump. Each and every pothole echoes in my empty belly. The engine is nervous like an ill-repaired diesel. The turns are sharp and unsteady. The driver is illegal, probably a sirouman[2] at the end of his shift. I don’t care. I desire to be nice to him as little as he wants to know about my life.

My life, of which I know nothing myself…

Under the orange streetlights a thousand small suns give Pompier[3] a festive air. Night is just about to end but the square is so crowded that it feels like it’s the middle of the day. Bales, bags, plastic chairs and sheep are loaded on the Ndiaga Ndiaye’s[4] galleries by zealous coxeurs[5]. The hawkers sell their fondé, a millet porridge, by the ladle. From my taxi, I contemplate this living island in this not yet resurrected city. My neck hurts from turning my head in order to make out the hundred or so puppets moving restlessly under the pale lights threatened by the still feeble sun. The driver keeps looking straight ahead, unfazed. Fortunately, actually. I don’t know if I really want to get to my destination, but I sure don’t want to end up in a ravine. He must be in a hurry to end his ride and begin his night… At six o’clock in the morning.

“… prendre l’autocar”, “… to take the bus”. We are now driving on the Boulevard de l’Arsenal, leaving the coach station behind us. This is a bad start. This primary school nursery rhyme comes back to my mind like an obsessive, but welcome, refrain. A perfect distraction from the thousands questions and doubts arguing in my head.

Right after the Place du Tirailleur where Demba and Dupont are standing back to back, the building with the colonial facade stands out in the morning. The ex brothers-in-arms. Back to back. I have always wondered how one could establish a North-South exchange in those conditions. What language is used between Islam and Christianity? Why has one a last name, while the other just a first name? A chance he hasn’t been called Mamadou or Doudou, as every African Muslim man should have been called, to simplify things.

The driver drives around the square and drops me in front of the station. I hand him a bill. The sum seems right, and in the same tacit silence I open the door which protests from all of its rusted hinges and slam it shut behind me.

The great hall is deserted apart from a few stray cats, two tramps sleeping on concrete benches, a cigarette and petit colas[6] hawker, and the teller, half-asleep behind his window like a fish in its aquarium. I am probably way too early. I couldn’t sleep anyway. I tossed and turned all night. Eventually I got up and, after a quick shower, I walked out of my house and into the night, preferring to face the jinns and the nitu guddi[7] rather than my own demons. I take a quick look at my wrist. Damn! I forgot my watch. The large clock on the wall is useless. Its hands are stuck in dusty eternity. Time, here, has another meaning…

I approach the teller in his fish-bowl. His eyes are half-closed and there’s a bowl of café au lait and a large loaf of bread wrapped in a newspaper in front of him. I think that way before Johannesburg, Rio or Copenhagen, Africans were the first ones to get into the habit of recycling. The necessity of resourcefulness…

I learned long ago that you have to be overly polite, even to the point of obsequiousness, with the low-grade personnel (and here, “low-grade” is not used pejoratively in my mind). You have to salute in the right manner, put in as many ‘please’ and ‘thank you’s’ that your sentence can tolerate in order to get the smallest bit of information, information for which he was paid, badly, it is true, but paid nonetheless.

His eyes are half-closed but he isn’t sleeping. Perhaps he is struck, like me, by the surrounding emptiness? I throw a circular glance in the departure lounge. Nothing moves, as if I have been playing Statues. But the sun isn’t up yet and my fellow players don’t seem too enthusiastic. So I turn back to the teller, who is still motionless. I’m in his field of vision but it’s obvious he’s trying to ignore my presence.

I end up knocking on the dirty window, half covered with with flyers and outdated calendars bearing the image of religious leaders. He looks up to heaven before settling his irritated eyes on me… Or the imaginary person behind me. If it weren’t above his strength, he would have added “What?!” Yet, one can’t really say he is overworked at this hour. Not caring much about his feelings, I answer his silent question:

-At what time is the Saint Louis Express train scheduled to leave?

In my hurry, I forgot the most basic of courtesies. But this little guy did deserve an exception in my education.

He heard my question but cannot resist the pleasure of making me repeat it. If that’s all it takes to make him happy, so be it. I learned long ago that you have to be overly polite, even to the point of obsequiousness, with the low-grade personnel (and here, “low-grade” is not used pejoratively in my mind). You have to salute in the right manner, put in as many ‘please’ and ‘thank you’s’ that your sentence can tolerate in order to get the smallest bit of information, information for which he was paid, badly, it is true, but paid nonetheless. The notion of “public service” is foreign to many of our fellow citizens who believe in only one thing: ‘friendly service’ or, rather, whims dictated by the mood of the day and the ability of the other to live with it. That’s very well, but I woke up in a foul mood, and even if I have been waiting for this day for years, for all my life even, I both want and don’t want to take this trip. I am frightened at the same time to find him and not find him there. And mostly, I don’t feel like being nice to a grumpy teller with a misplaced sensitivity. He probably understood this because, confronted with my silent and steady insistence, he finally gives in, between two bites and a loud sipping of his coffee:

Any protest is futile, a fight lost in advance. Does it mean that the 7h05 train will finally leave at 9h? Sealed lips. And one doesn’t say two hours of time, the hour being itself a measure of time, as I always tell my students. Sealed lips. So I just deny him a ‘thank you’, he probably wasn’t expecting anyway, and I go and sit down on the only bench left vacant by the tramps.

[1] ‘I Will Go’ is the title of a nursery rhyme written by Souleymane Djigo Diop. [2] Cab driver who uses the cab of another driver while he or she is resting. [3] Nickname given to the bus station in Dakar, because it is close to the fire department (“Pompiers”) [4] Bus. [5] Ticket collectors. [6] A nut with stimulant qualities. [7] Evil spirits. [8] A deformation of wa aleikum salam, “hello” in Wolof (from Arabic)

“I admit I felt nothing when the news broke,/ it was only the stained glass bellies of the purple martins/ flaring, that made my skin bristle into the laketop stillness…”
Poem of the Week (1 July), by M.J. Arlett.

Original French text of Nafissatou Dia's 'I Will Go'.