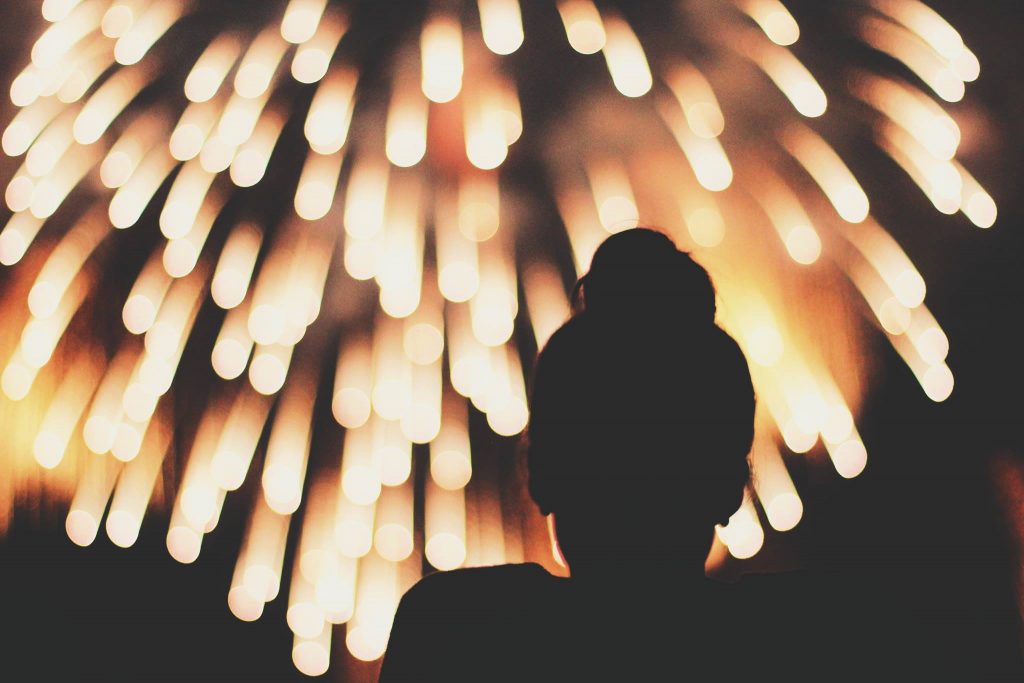 Festival of lights, by Asad Yahya. Image courtesy of the artist

“The angels keep their ancient places; —
Turn but a stone, and start a wing!
‘Tis ye, ‘tis your estrangèd faces,
That miss the many-splendored thing.”
~ Francis Thompson, ‘The Kingdom of God’

The year ended in rubbled apartments and burnt mosques of Aleppo
bloody alleys of Mosul, assaulted Christmas market of Berlin
airliners’ debris over Medellín and the Black Sea
haunted by YouTube shadows of Cohen, Prince, Fidel

and others too numerous to mention. Death masks in the mirror,
joins the ticker parade of funny faces

be sure in any case
the angels keep their ancient places; —

when you pause near guava, lime and avocado gardens with a prayer and a song
turn but a stone, and start a wing!

III.
The commerce of tattooed intersections, the beauty-parlour business of Babylon
engraved cynicisms pleating painted eyebrows, gossip of miseries broad-thighed in doorways
iPhones’ twitter from palms of selfie millennials turning corners of rumour
into traffic of fake news. December stumbles with sudden deaths of the famous

and the victim, past predictable headline griefs, to champagne boat-rides
midnight fireworks, infidelities, intimations of apocalypse —

where, what, why are the plumbed depths of all that going
from bus-stand to cake-shop to Syrian store to passport office to morgue?

—on the palimpsest of your defiant erasures
‘tis ye, ‘tis your estrangèd faces,

become alien signature, distracted, tone-deaf
to your own primal keening
under the craving to be touched, to be kneaded —
at the turning of the year

in sight of 70, anticipating retreat
I know the Kingdom’s door will swing

to receive me soon some new year morning.
Beyond my fool of a heart that loves the sloe-eyes of Egypt

let me not be found among the self-deceiving
that miss the many-splendored thing.

John Robert Lee is a writer of prose, poetry, journalism; a librarian; and a former radio and television broadcaster. His latest publications are ‘elemental: new and selected poems,  1975-2007’ ( Peepal Tree Press, 2008), ‘Sighting and other poems of faith’ (Mahanaim, 2013), ‘Bibliography of St. Lucian Creative writing: 1948-2013’ (Mahanaim, 2013), and ‘City remembrances: Poems’ (Mahanaim, 2016). His ‘Collected Poems 1975-2015’ is forthcoming from Peepal Tree Press in April 2017. His bibliography of Caribbean literature is available here.

In this essay, Senior Articles Editor Aaron Grierson writes about freedom in the digital age and just what it means in the ever-expanding Information Age.

Our Bodies & Other Fine Machines

"Its fragmentation gives ... the impression of a Japanese fan: a wealth of perspectives, intricate etchings in every panel..." Pratyusha...