‘Twenty Steps’ is the title story of Correia’s most recent collection, ‘Vinte Degraus e Outros Contos’, which won the prestigious Camões Prize in 2015. It’s also the first text I read by her, and the one that got me hooked — I was immediately fascinated by the world it creates, which is somehow both magical and harshly, viscerally real. 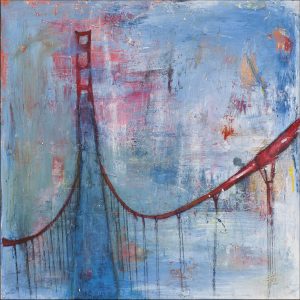 Artwork by Oleksandra Skulinets. Image courtesy of the artist.

You needed twenty metres for it to work. That allowed time for the person to do their hanged man’s dance. For their eyes to cloud over on the way down, oblivious to the murderer watching from above.

The woman repeated it again and again, her dry lips flecked with foam.

No one was interested. She was talking about a bridge, her bridge, the duplicitous bridge that had tempted her with suicide and left the job undone. She, the woman, had thrown herself off and landed on the sharp rocks below. She lay there for hours, shouting. “It wasn’t bloody high enough!” she yelled. Soon she was laughing as she said it. Love had counselled her to die, but, ultimately, matters of the heart are no more important than a snake. They give you a fright, then slither away.

Her bones, large and small, had all mended just fine. Except in her left foot, which was now twisted to one side. The hole in her forehead, from which so much blood had streamed that it had run into her mouth as if not wanting to go to waste, had generated its own very peculiar substance. Neither skin nor flesh. A fatty white whirlpool, like a wax flower on her dark face.

She was born on the other side of the mountains, where women began to be ugly. The ones by the sea drank up all the light God provided, covering eyes and heads with its blues and golds. The woman’s name was Rosa, and she clung to the beauty of that name, so lovely, so full of velvets and satins. She used to hop down the road, brown against the brown landscape, her hoe on her shoulder. She farmed her grandmother’s land as best she could, hopping along in her misshapen boots, her socks on even in the heat. A large, grey, solitary rabbit. Then the man in the truck drove past.

Oh, he was a man who glittered. And because he glittered, everyone thought he was good. Even Rosa’s grandmother. She riffled through the wad of notes he gave her, and lines of joy overrode the lines of sadness without much altering her face. All her life she had dreamed of money, and never once of her granddaughter. They knew precisely how much each of them was worth.

When they reached the city, Rosa felt afraid for the first time. Not because she was worried about her Dad’s intentions, but because she couldn’t see the horizon any more.

The goodness of the glittering man may have been fake, but it still stuck to the surface for a good long while. He wore bracelets and gold chains, brylcreem and patent leather shoes. Rosa peered out of the truck window, feeling the speed, her brain lighting up and shutting down so often that, by the end of the day, it had been utterly transformed. When she went into their room in the motel, she prepared herself to be undressed and used. But, instead, the man lay down beside her, jingling and smelly, and immediately fell asleep. A good man, Rosa thought. He was taking her away to become a maid. In the morning, she asked his name. There was mould on the breakfast jam. Call me whatever you like, call me Dad, he said. He wasn’t old enough for that.

When they reached the city, Rosa felt afraid for the first time. Not because she was worried about her Dad’s intentions, but because she couldn’t see the horizon any more. She tried to make out where things began and ended, but she hadn’t even noticed when the change occurred. She’d been distracted by the long line of cars coming to a sudden halt, the tarmac stretching ahead like a dried-up river in the empty expanse of bushes and long grass. Then, before she knew it, there was no longer any distance left to look into. She began to tremble. They pulled into a courtyard. This is Lisbon, her Dad said, and he took her bag and helped her down. There’s no wind in Lisbon, Rosa thought. Nothing resembling air could possibly pass between these enormous buildings. Then she looked up, towards the sky, but it made her feel dizzy and she looked down again. Her Dad took her arm and pulled her gently along with him.

The steam from the cooking pots reached her even before the door opened. It tickled the back of her throat and made her want to cough. “I never have got used to those African spices,” she said. And she laughed. She laughed. And with that laugh she won over every client in the house. And the girls too. The deaf-mute, the hairy one, the dwarf. And others who didn’t stay long, who had bigger plans and sent the doorwoman to buy them exotic potions from a cellar in the Baixa. They knew how to make men cry, copying the catalogues of misfortunes from the TV shows of evangelical bishops. And the men wept and drank, and then came back to take the girls away. The cross-eyed girls had particular success with this technique. Not that they married well, but at least they married. They got wardrobes all to themselves. Strangely, their Dad didn’t mind. These women had, to all intents and purposes, betrayed his trust, and yet he remained on good terms with them. He often asked them for advice. He never asked Rosa. And yet Rosa had never slipped a potion into anyone’s drink.

She said, “The bedrooms were on another floor. The lift was going up and down like a yoyo.” But the other women in the building never said a word. Nor did their husbands. Because, by then, nobody was sure exactly what behaviour they were and weren’t meant to tolerate.

“We were all crippled, see?” Rosa said. But she was talking to herself. “Cripples know how to please a man. Our Dad made a mint. He even moved to a new neighbourhood.”

“come when the rains/ will not stain your/ lily-white shroud// where the sun/ will not freeze/ your blood…” Weekend poem, by David Ishaya Osu.