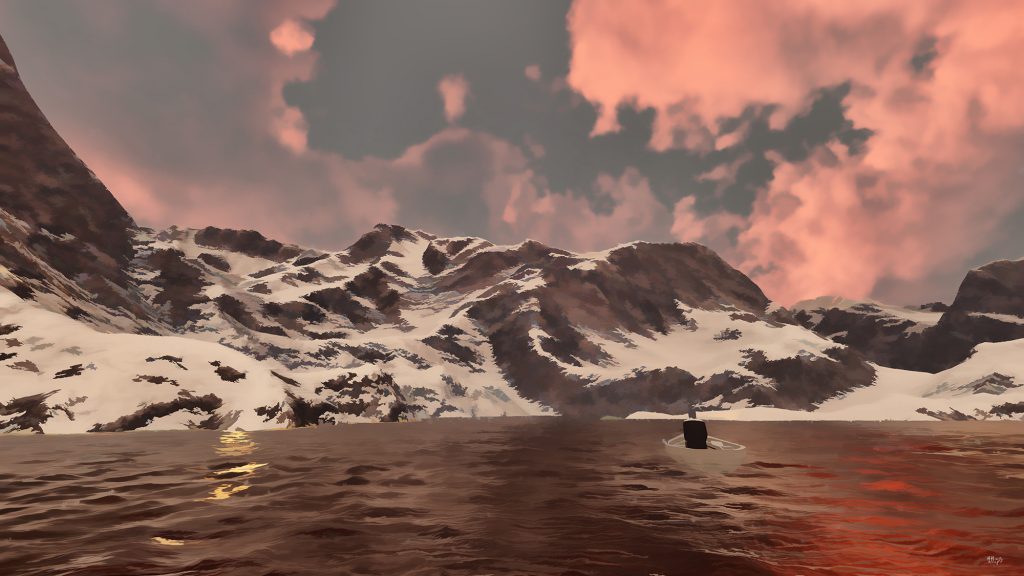 Two giant spheres suspended in a galaxy of stars.

There was a warm luminous glow emitting from the bigger orb, similar to an autumn moon — the smaller, whiter orb sparkled like a precarious diamond, ready to be plucked out from the heavens. There were bright speckles floating in the grayish-blue fluid, like stars floating across an infinite chasm of time. The mountains took on a kaleidoscope of colors and the lake at their feet reflected back this otherworldly image, merging one in all and all in one.

Mea stood at the edge of the lake — facing the mountains and its two guards. Her waist-long, brown hair caressed every fiber of her being; it seemed as if the orbs and the glittery speckles, the Milky Way and the mountains were synced to her breathing. She reached her hand and touched the sky, creating ripples that washed over the moons.

To her right she sensed a presence and the gentle whiff of jasmine, lemon, and bergamot enveloped her. She felt a soft gaze caress her neck and soon her firm, hard hand had found a new companion in a soft and moist one. Mea’s lips curled into a smile, she closed her eyes and inhaled this moment in its entirety. Slowly, she turned and looked at her, white shalwar kameez looked so well on Naano. She wore her hair pulled back in a neat bun at the nape of her neck. Her benevolent face had creases on the forehead and the crow’s feet around her brown eyes deepened when she smiled. She reached out for Mea’s face with both her hands and lowered her forehead, her lips merely grazing Mea’s warm skin, a fleeting touch of grace, breaking the spell.

Suddenly the wind picked up and a shadow, stretching its wispy tentacles, crept over the mountains. The two orbs started spinning, creating a cataclysmic storm. A whirlpool emerged in the center of the lake, rising upwards. As it gathered momentum it started absorbing the landscape, leaving behind a strange darkness. With a crash, the two orbs merged into each other, giving birth to a giant transparent sun; the eye of the storm.

Mea’s heart raced faster and she gasped for a clean breath of air. She tried to shield her eyes from the flying debris only to realize that she was a forced audience to this grand spectacle of chaos. As the storm gathered pace and performed its pilgrimage around the giant orb, the temperature started falling. With a plummeting heart, Mea saw the Naano no longer by her side but in the center of the orb; a small figure in a giant transparent bubble. No voice left her mouth when she tried to scream.

Mea woke up with a start, breathless. It took her a few moments to realize that she was in her bedroom. The only sound, other than her pounding heart, came from the clock by her bedside. Steadying her shaking hand she reached for the clock, it was a few minutes past midnight. The sudden ringing of the telephone brought her back to reality. She heard her father’s heavy footsteps in the next room as he answered the call. Winters have a way of magnifying silence; her father’s voice seemed very loud, disrespectful almost — like a drunk inside a temple. To his daughter, Colonel Rehmet was a figure to be revered, obeyed, and loved in secret.

Carefully, she pulled out of her bed and her toes touched the marble floors which had formed a frozen lake under her feet. She stole a look at her brothers sleeping peacefully and tiptoed her way to the next room.

“Ina lilahe wa ina elerajioon,” she heard, “Surely we belong to Allah, and to him we shall return.” That one phrase summed up everything. Standing in the hallway, she started shivering, not just from the cold but from the realization of what it all meant.

Colonel Rehmet caught a glimpse of her nightgown and opened the door. “Naano is no more beta. She died tonight.”

For Nazish, It had been a special kind of pain to be the plain looking daughter of a beautiful woman, a lifelong struggle to out-grow comparisons with a face which was at once a blessing and a curse.

It was midday in January. A crisp wind blew from Siberia towards Quetta, the capital of the south western province of Baluchistan, Pakistan. Her father’s single storey house sat in the valley facing Koh-e-Murdar, The Dead Mountain. Some would find Quetta in particular, and Baluchistan in general, to be a desolate wasteland with barren mountains and a stark landscape, but Mea loved this place. Sitting in the sun-room she looked at this barren mountain, with sharp features of a seasoned veteran, towering over a city laden with fruit trees and the smell of citrus. She heard it sing when the air rustled the pines and the old maple trees. She inhaled its scent, when the fresh spring water mixed with the soil, smelling like the first drops of rain.

She tried to busy herself in a book she had casually picked up but the thoughts and the images from the other night kept returning to her in vivid detail. She had tried in vain to separate the dream from the reality.

Is that even possible? How could I feel her hand on my face; how can I still recall the faintest whiff of her scent?

Mea turned around to look at her mother sitting in a big chair, her back towards the sun. The grapevine outside the window danced in the wind, casting shadows on the green and beige floral carpet at her feet. Nazish Rehmat was in her late forties and had a pleasant face with a dignified manner — the constant frown lines etched on her forehead gave her a somber look. She raised her brown eyes over her reading glasses and looked back at Mea.

What an uncanny resemblance Mea had with her mother, the late Begum Mehr-un-nisa, straight long hair, a heart shaped face, and big, almond eyes. While Begum Mehr-un-nisa had not been a tall woman, Mea at fifteen, showed every promise of having taken after her father, who stood at almost six feet. For Nazish, It had been a special kind of pain to be the plain looking daughter of a beautiful woman, a lifelong struggle to out-grow comparisons with a face which was at once a blessing and a curse.

Like most souls who may live together, crossing the barrier from the mundane to the meaningful required more than just shared grief.

Finally, Nazish spoke matter-of-factly, “Dreams? Dreams aren’t real beta. They are things you hear and experience all day.” Her eyes fixed on the yarn wrapped around her fingers, knitting an intricate pattern.

“Ma, Nano came in my dream the night she died. I swear! I felt her hand on my face and I could even smell her perfume!” Mea’s voice cracked with emotion and a lone tear stung at the corner of her eyes.

“Mea! I don’t know from where you get these ideas.” Nazish sighed, raising her eyes to look at the child sitting her feet.

“Ma is it not possible that there could be more to life than what we comprehend? Isn’t it possible that our spirit may be able to communicate by other means?”

Nazish put down her knitting and looked at Mea squarely, “Young girls should concern themselves with practical matters, not waste their time pondering silly questions!” with this she set aside her things and got up.

Mea saw her leave and shut the door. She could physically feel the hurt and anger rising from the pit of her stomach; she got up from the floor and threw the book across the room.

Silly questions! These vivid and wild dreams! There is no earthly experience that can compare to the clarity of what I saw and felt, and yet she says that it wasn’t real! She didn’t even hear me out! The plummeting heart, the wind in my face, her perfume – nothing was real! Her reality tastes like sand in my mouth!

Tears of frustration ran down her cheeks. She felt disgusted with herself, opening her heart only to be shut down. She should have known better than to talk with her mother. Nazish Rehmet was a dutiful wife and mother, she took care of everyone’s needs and there she drew the line. What she thought and how she felt was always a mystery.

Can we just start this column off by getting down on our knees, raising our fists to the skies and screaming in despair? The…

"She waved away my tears and told me to just ignore them./ I was not American enough to get the...