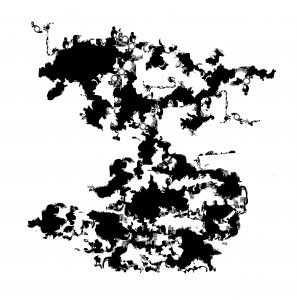 SideBurned Poet by Chris Stewart. Image courtesy of the artist.

Stanislav lives behind the railway tracks near Beryozka stop. He moved into his dead brother’s flat. He was not able to find the house of his parents. He only found a deep hole from a one-and-a-half ton bomb and a fragment of the fence thrown behind a tall tree by the explosion.

Instead of a street wall, in his new flat plastic drawers stand stacked on each other, tied tightly together with aluminium wire. The man bought the drawers in the market. On top of this whimsical construction ragged blankets are thrown, gathered from all around the area. Stanislav says that this really helps in bad weather: the rain hardly gets inside the dwelling. The other day he told the story of his current neighbours.

Five storey flats have been standing here for a long time. They had been built in the shape of a semi-circle.

Now they have been badly damaged from the outside, but people still live facing inside in the yard. There are three in our entrance: Grandma Vera with granddaughter Lyubushka and me. And that is it, there is no one else. But in other houses there are many residents: four or five families in one entrance way! There are some children.

My neighbour Lyubasha is blonde. She has grey hair. The girl does not wear plaits. Her hair flies in all directions and bounce on her thin shoulders like a wave. Perhaps like all the children she likes ice-cream and dancing. But who is going to appreciate all these hand movements, her shining eyes? Unexpected turns? Perhaps only a murky broken mirror?

The girl catches cold frequently and gets sick. Grandma Vera rejects medicines in favour of home-made herbal remedies. “They are delayed with our pensions, but we need to eat anyway,” – repeats my older neighbour time and again. Today she planted onions under her window and announced that there was some for me in planted in the vegetable patch. This woman always finds something to do. She is strange. She cleans the yard every day.

I am thirty three. I am a bachelor and unemployed. The youngsters of our yard look at me silently. Only Lyubasha bombards me with questions:

– Why do you smoke? It’s poison! And where are your children?

Grandma smacks her and sends her away.

The girl does not wait for my answers. Her cheery “Hello” gets repeated twenty times a day. Oh! I’m so bored of her!

It’s been already about three days that I haven’t seen the little chatterbox in the yard.

– Where is your granddaughter?

– She has a temperature, – sighs Gradma.

I am thirty three. I am a bachelor and unemployed. The youngsters of our yard look at me silently.

I take out dinner from my pocket – a can of condensed milk. Vera the neighbour nods, thanks me. She disappears into her room.

One week has passed, then the second… It’s still empty in the yard. Lyuba is not anywhere to be seen.

I invite myself to visit the neighbours.

I look at a narrow hospital bed with surprise. On it lies a semi-transparent little figure as if wrapped in invisible cotton.

In her hands the girl holds photographs.

– This is my mother, my father, this is Sashka, my older brother,  – Lyubasha is looking at me attentively and is silent… She is waiting for me to answer.

– Don’t worry. They will soon come back from the refugees! – I say to her in order to say something.

– No, – Lyuba shakes her head,  – they were inside the house. And the plane went ‘whoooosh’! Grandma and I made it to the basement. Mother, father and brother got delayed, they were taking blankets, food…

– It was a direct hit. I didn’t find anybody. Only rags from the dress of my daughter-in-law and some buttons.

– I dreamt of an alien ship!  – interrupts the girl.  – They all came to the earth. Lights! Beautiful light, it’s pink and blue!

I nod. Silently I take out my last hundred roubles.

I lie that I made it, getting muddled that this is the debt for my salary.

Lyubasha died in two days. Unremarkably, quietly, in her sleep.

Grandma Vera was taken away by her friend.

I remained alone in my entrance way.

Polina Zherebtsova was born in 1985 in Grozny and lived there for almost twenty years. She considers herself a cosmopolitan as she has multi-national ancestry. Polina’s father died when she was very young. In 1994, Polina started keeping a diary in which she recorded what was happening around her. Her diaries cover her childhood, adolescence and youth that witnessed three Chechen wars. In 2006, she was awarded the Janusz Korczak international prize in Jerusalem in two categories (narrative and documentary prose). In 2012, she was awarded The Andrei Sakharov Award “For Journalism as an Act of Conscience”.

At a time where everyone seems to be on social media decrying the latest controversy or terrorist attack, Emily Eagen explores whether online activism can really make a difference.

"We were tangueros/ of the same tile, tropical/ byway, creek mist,/ and love's insomnia under Venus..." Poem of the Week...