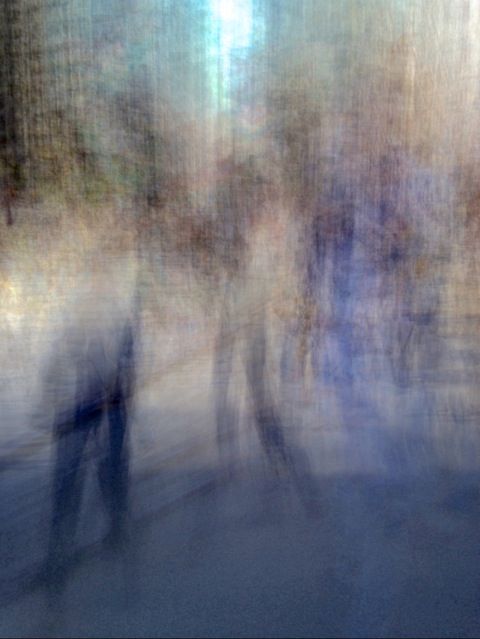 Translated from Czech by Marek Tomin

I sat down on the pavement, had a little rest. That’s what surprised people most. And what would you do, sir, you with your fake doctorate, from Bucharest most likely, if someone ran your child over before your very eyes? You’d become aware that you had another child and you’d sit down for a moment. Drunk, they said. Your honour! Allow me to laugh. I had my first bout of delirium tremens out in the fields. That was the time when my little girl floated away, I really do have bad luck, that’s for sure. Then I went somewhere, I was out in the countryside. Now imagine this, Your Munificence. Suddenly, in a single second, every church spire in this adorable vale, they are but a stone’s toss from one another, broke off and headed straight for my heart. And then imagine, Professor of All the Human Sciences, that all the sickles on all the little monuments and posters scattered over our glorious countryside by the wise and firm hand of the Party went flying into my little heart, and all the hammers pounded my head, I had an awful racket in my head as a result, I felt like I was standing next to a cascade of crockery, smashing on the ground.

An enchanting place, these Czech lands of mine, really, and I swear: they combine Catholicism and Communism in the most degenerate way possible. And I’d like you to write an essay about this bipolarity for me, to be handed in before the next lecture, five pages will suffice, Comrade Political Commissar, and that’s an order. But the main thing you should keep in mind: What do these two dogmas that rule the world say to a human being toiling away under a low, murky sky? They say: Guilty! Guilty of existing. Always, and under all circumstances. Choose your own punishment. Do it! Mine is alcohol. I must admit I feel somewhat confined. I’d be quite interested to know how long I’ve been here. So he managed it then, Mr World Shaker! Got rid of me, now he’ll get his hands on that business of his, grab the boys, or what’s left of them, I might add, in order to dispel heavy gloom with a bit of light cynicism, and he’ll scarper. Half the nation is pushing its way to the borders. And I’m lying here all comfy like this, resting, lucky me! They probably strapped me in so I wouldn’t squash my belly, or rather wouldn’t hurt whoever’s in there, no wonder, I’m not important, but a little soldier or a prostitute might fall out of me, they’d come in handy to them.

An enchanting place, these Czech lands of mine, really, and I swear: they combine Catholicism and Communism in the most degenerate way possible.
Well, all right then, I messed up. Forget the cops, I know I’ll have to stand in front of a different court of law, the one that’s been in session from the first second, from the moment the first living cell came into being, since the Earth’s first morning. Bottle after bottle, you drank your brain away. But it’s not too late yet. Five minutes to twelve isn’t twelve, esteemed Jury. I’ll get out of here. This isn’t a Soviet psychiatric asylum, this is a bona fide Central European establishment for gravid, homicidal alcoholic women, damn it. I’ll crawl after them on all fours, if need be. After my kiddies. Instinctively, like a she-wolf.

Investigating officer! An alcoholic, an insomniac just wants some peace and quiet after a busy day, they call it the oceanic feeling. Not many people know that. And we all know that every day is very busy indeed, especially in this landlocked country, don’t we, Mr Bubble and Mr Squeak, dear Hum and dear Drum, dear neighbours.

I want a different life, Mr Science Maestro used to say to me. We have children together, so what are you going on about? He moved out, Mr World Changing Inventor. I gave birth to his children and just as the big four-zero creeps up on me like an octopus, he ups and leaves to devote himself fully to his work. Well that’s fucking hunky dory. Is that what you do to someone? That’s exactly what you do to someone. Waiter, one more over here. Make it snappy!

When that son of mine sat down next to me on the pavement, he said: Mummy. He was shaking all over, but he was radiating such strength, it warmed me.

He’ll pack them off to the scummy countryside again. He wants to emigrate, most likely, seeing as that racket with the comrades didn’t come off. I’ll sell it to the army, he says. Where do you think you are? If the army wants something, it takes it.

Oh well. And to top it all there are aeroplanes flying over Prague. Probably not bombers, I should be so lucky. More likely they’re full of goggle-eyed boneheads from Siberia, so nervous with fear they keep tripping over their Kalashnikovs. If we had what it takes they’d be stumbling over their own guts soon enough. The Czechs. All those tricoloured flags everywhere. National pride. Jesus Christ! If I was at least a tiny bit sane and not tied to this bed, obviously, I’d crawl under it to hide in shame. Or fear, more likely. How can anyone leave a defenceless woman to face an attack by an army with missiles? Hello! Cretins, anybody there?

Nah, they’re not bombers. There’d be the noise of explosions by now. If an atomic bomb exploded over Prague right now my heart would burst with joy. When I was a little girl I saw Dresden on fire. From the window of our flat in Prague. I saw the light of a blaze burning in the sky. I’ll never forget that. And now I’m going to pray for a teeny-weeny miracle. That when I wake up these straps will be undone and the door open. Maybe it’ll happen.

Jáchym Topol is the leading Czech author of his generation. Active in his youth as a samizdat poet and songwriter, since the Velvet Revolution of 1989 he is best known for his reportage as a journalist and his fiction capturing the struggle of Czech society to come to terms with the legacies of communism. His previous novels include ‘City Sister Silver’, ‘Gargling with Tar’ and ‘The Devil’s Workshop’.

Marek Tomin was born in Prague and grew up in England, where his family found refuge after being exiled by the Communist regime in 1980. His translations include ‘Glorious Nemesis’ by Ladislav Klíma and Emil Hakl’s ‘Of Kids and Parents’. He lives in Prague and London.

This excerpt is taken from ‘Nightwork’ (Portobello Books, 2014), and appears with kind permission from Portobello.