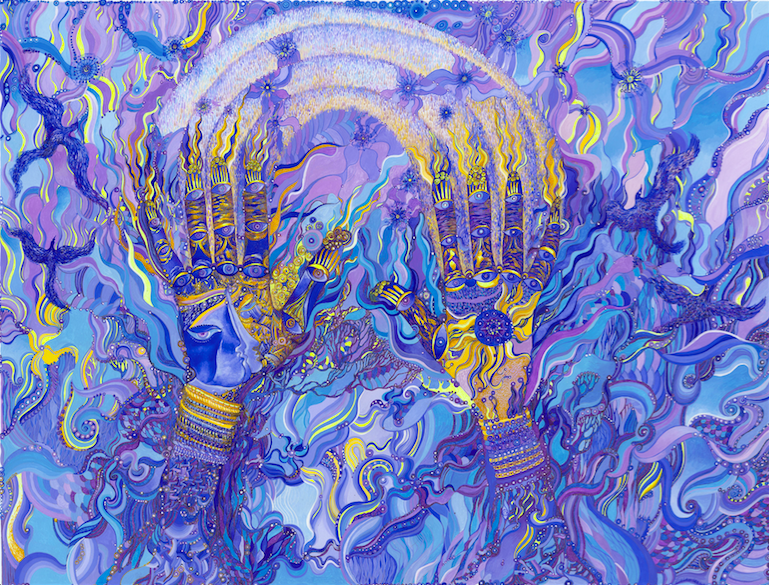 Hands of Master, by Iryna Lialko

“This is what they fought for. Will we keep fighting too?”
By Gimel Samera

Years ago, a high school friend delivered a rousing speech on women’s rights to a class of mildly interested girls. In some countries, she said, girls of our age group, who had the desire to learn, were denied the privilege simply because their futures waited for them in the kitchen. Looking back, I don’t know how many of us were affected by her monologue but I do know that I still ask myself that same question. Will we keep fighting too? We’ve come far, but there’s still a long way to go. My mother likes to remind me of the privileges that women have now, which were not available to the generations that preceded them. What were once dreams to women have become our reality. In the same way, our dreams, if we choose to fight for them, will determine the future of the next generation. But of course, the fight never truly ends. There’s always another brick wall to break down.

While some of us have some semblance of freedom to live lives on our own terms, there still remain a large percentage of women who are fighting to break free from archaic traditions. One such tradition is Female Genital Mutilation (FGM), an issue that many in the West have never had to think about beyond the occasional uproar over male circumcision prescribed in both Islam and Judaism. The recent practices on women in Tanzania, however, have thrown the issue wide open. It is a practice that occurs with unknowable frequency in different parts of the world.

Homemade curved knives are just one example of the crude tools that practitioners use. Some utilize thorns, threads, broken glass or razor blades.

For those unaware, FGM — otherwise known as female circumcision — is a centuries-old procedure that involves the partial or total removal of the external female genitalia, and is mostly performed on young girls between infancy and age 15. According to statistical reports published by UNICEF, more than 125 million girls and women alive in the world today have undergone female circumcision, a twisted rite of passage commonly practiced in some rural regions in Africa, Asia and the Middle East to appease cultural, religious and social norms.

Though the origins of the practice are unknown, many medical historians believe that FGM dates back to at least 2,000 years. In ancient Egypt, it was customary for both sexes, once they were at a marriageable age, to undergo the cutting ritual to differentiate them amongst the aristocracy. For others, the reasons are far more severe. In 1799, the English explorer William Browne wrote about the Egyptians infibulating (one of four major types of FGM) their slaves to prevent pregnancy. Gynaecologists in 19th-century Europe and the U.S. would remove the clitoris of female patients as a method of treating insanity and curing nymphomania. It was only recently, in December 1993, that the United Nations General Assembly included FGM in the Declaration on the Elimination of Violence Against Women, passing legislation to prohibit the continued practice of female genital mutilation in more than 33 countries.

Yes, the rise of anti-FGM campaigns and organizations, like the Rural Women Peace Link and the Desert Flower Foundation, saw to the decline in numbers of circumcised girls. However, many still believe that FGM is a medical necessity, but FGM has no health benefits for girls or women whatsoever. The procedure is brutal and dangerous, causing severe pain to the patient. As demonstrated by a Kenyan circumciser in an interview conducted by the Guardian, the cutting of the clitoris is like pulling grass out from the ground.

In rural villages where FGM is encouraged, girls eagerly anticipate the day when they will be allowed to attend “Tum”, what they refer to as the ceremony of circumcision. In an article for the Guardian, anti-FGM campaigner Domtila Chesang recounts the day she witnessed her cousin being cut:

“Six other women pinned her down, holding her head, hands, legs, with one sitting on her chest, overpowering her completely, with more than 10 other women watching while singing. The cutter, with her homemade curved knife, was bending over her. When all of my cousin’s genitals were out, there nothing left but red, bare flesh, I realized something was terribly wrong. My cousin lay naked and screaming on the ground. She was to stay in a secluded place for a month with her legs tied together to help her close up the wound, leaving a tiny hole and achieving a new shape altogether. All this for the sake of a rite of passage and transition from childhood to adulthood.”

Homemade curved knives are just one example of the crude tools that practitioners use. Some utilize thorns, threads, broken glass or razor blades. Apart from some medical centres that administer this “service” with a little more professionalism, anaesthesia is mostly a foreign concept. In fact, the pain plays a pivotal role for it proves that the girl is strong if she endures it. The consequences of FGM are irreversible and long term, because it damages healthy tissues and interferes with the natural function of the female body. In time, the girls will suffer from excruciating pain, increased risk of childbirth complications, infertility, haemorrhage, bacterial infection, and urine retention.

There are many reasons why FGM is encouraged among communities. Often motivated by beliefs about what is considered proper sexual behaviour, it ensures a girl’s premarital virginity and marital fidelity. It is believed that cutting off parts of the female genitalia will reduce a woman’s libido, which therefore helps her resist “illicit” sexual acts. As if the male species were any less capable of instigating sexual infidelity. The truth is this “belief” points to a deeper problem: they think they are entitled to control women’s bodies. In his book ‘Of Virgins and Martyrs: Women and Sexuality in Global Conflict’, sociologist David Jacobson writes, “who owns and control’s one’s body, especially when it comes to women: is it the individual herself or the community, through enforced practices of honor, virginity, veiling, and marriage?”

From a cultural context, the practice is dictated by traditions, playing with the ideal of femininity and modesty. In addition, many doctors and midwives in poor countries benefit from the financial boost that their services provide, even if it is at the cost of the lives of young girls. The price for defying tradition is thought to be far more severe than a lifetime of suffering. An uncircumcised woman is looked down upon. Her failure to comply has brought her shame. She is not considered fit for marriage because she has not made the transition from child to adult,[xi] which is brought on by FGM.

According to Chesang, the practice prevails today because of the lack of awareness being raised in communities. Men and women alike should be taught that female circumcision is a direct violation of the human rights of girls and women, not to mention children. It disregards them of their rights to health, security and physical integrity. In addition, female genital mutilation, as stated by the World Health Organization (WHO), “reflects a deep-rooted inequality between the sexes and constitutes an extreme form of discrimination against women.” When Jaha Dukureh, activist and FGM survivor, spoke at a press conference on Engaging Health Workers to End Female Genital Mutilation, she wasn’t just speaking to a crowd of journalists; she was speaking to both women and men, attesting to the cruel realities and dangers that a large percentage of the female population is still experiencing. When I read about these girls, I think of my younger sisters and I am immediately overcome with the need to protect them. Can we do the same for them? Will we keep fighting too? As long as female genital mutilation exists, as long as it remains unchallenged, these women are not whole and intact.

Literary critic and editor Muneeza Shamsie writes about the talents featured in this issue – a rich tapestry of contemporary Pakistani poets and authors.