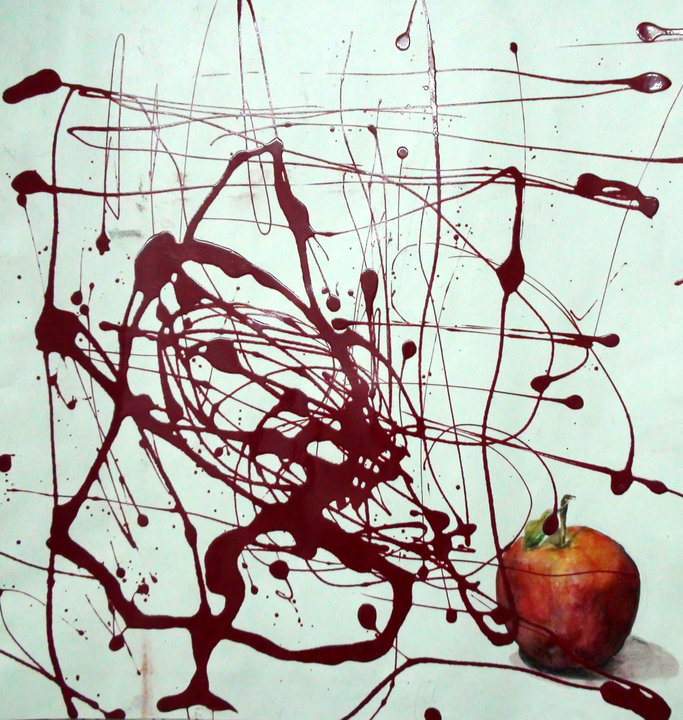 “Fasad ki Jarh” (The Root of Temptation) by Hashim Ali

We may not all be artists but as humans we enjoy looking at things. Natural beauty and artificial creations have always offered something new and different to look at. While some choose to philosophize over these inclinations, the field of aesthetics is an ever-changing one. The changes mean that people have to find their own way through the forest of tastes. This can be especially difficult since few people would be so perfectly encompassed by one particular look. Further complicating matters, aesthetic tastes evolve, shift, and sometimes make a surprising return like boomerang bellbottoms. Part of the change is intermixing, which leads to the creations of hybrid trends and generally increased popularity for one or both parents. The result is an individualized exploration of a sort of politic, a constant series of negotiations someone experiences as their tastes, be it for an art or literary style, or their everyday wear change.

A recent growth is that of the steampunk genre said to originate with the fiction of Jules Verne and H.G. Wells. From the former’s 20,000 Leagues Under the Sea to Philip Pullman’s more recent His Dark Materials trilogy, steampunk has a variety of guises to experience and enjoy. I say “growth” because steampunk is not only a rather old genre of literature, but it is becoming more visually and thematically present in contemporary culture, noticeably in literature. However, most texts are only beginning to be adapted into films and thus many titles may be harder to come across. Rather, the themes or certain keywords may make the inclusion of the steampunk genre standout to those who wish to search. But what are these themes and keywords?

“Clockwork”, “airships”, “genius inventors”, Victorian era settings and visual styles are all examples. They have reached well beyond the reaches of literature, into film, music and costumes. From the latest adaptation of The Three Musketeers to the band Abney Park to conventions, steampunk has begun its temporary rise from underground culture. Musketeers, for those who missed it, was most notable for its fleet of airships, which eventually wind up fighting it out in the skies above the English channel.

Abney Park has been described as the quintessential steampunk band – over the years they have developed individual personae for each member, who is a pirate on the airship Ophelia, appearing on stage during live performances in full costume. Additionally their last few albums have been centered on their fictional adventures as airship pirates, having evolved from a world / gothic / dance sound, much of which is still evident. The style of steampunk has spread to other bands as a sort of aural experiment. The Canadian band Rush’s recent 2012 release Clockwork Angels, is one such experiment, weaving a pseudo historical tale through a steampunk world. The title track is a 7 minute epic of majesty evoking images of a clockwork world, from land to the air.

But without indulging myself too much in the enjoyment of such music I must continue to my point of steampunk’s rising popularity. Once, it was a retro (not just 70’s, but the Victorian era, as previously mentioned) sub-genre of science fiction which grew into an underground fashion motif that was rooted in another key element of the genre: DIY at home (or in your personal laboratory). Its rise in popularity has changed for many people, as you can now buy or custom order steampunk costumes and accessories. Now there are even conventions featuring bands and other performances.

Such a transformation highlights something the modern world has accelerated. Elements from the sub-genre have been taken as individual pieces and reworked into something different than stories of inventors and airships. Another such example would be the hippies from the 60’s, where some of their culture was inducted into what would be termed mainstream and transformed into something different. The result, in all its visual forms is free of the political connotations the parental generation imbued it with. So the retro-rebellious self- fashioned geniuses, swashbucklers and even ladies of the evening appear as nothing more than a hollow cast of what they once were.

The original connotations of steampunk might not have been political, but in many instances they too have been taken down for the sake of aesthetics. The creative genius of the individuals, be it machines, tools or otherwise, has been broken down and disseminated to a broader public. While not yet at the point of mass production one who studies the developmental history of steampunk would notice that it is as if those wily airship pirates ransacked both laboratories and high class dinner parties. The result being a collectively fanciful variety of Victorian era clothing that recreates certain fictional or actual professions.

A line is drawn between those who appreciate the aesthetic and the actors, as one may suitably call a costumed person who adopts a persona for a duration of time. That line is the persona, no matter how temporary. Many may love the fashion, and wear it for whatever casual or formal occasions, even appreciating the fictional twists added by the genre. Then there are others who not only appreciate the fashion’s aesthetic, but the DIY mentality and fantasy behind the genre. The latter group often forms into conventions, which though not exclusive are not as well attended by the general public. The events, persona and costumes are all part of a negotiation done by the actors. They walk social lines of stigma concerning their hobby. While it may not be seen by many any more, being called a “nerd”, “geek” or some other kin term still may result in some sort of unwanted segregation. This has been the way of life for the countless before us, and doubtlessly the countless who will succeed us. Perhaps even many of us, steampunkers or not, follow a similar path along a thin line between meaning and mere appearance.

The “politics of aesthetics”, if we may term it so is something nearly all subcultures or sects or genres encounter in contrast to mainstream society. Technological advances have increased the ability both for actors to produce and enjoy their costumes and stories, while at the same time better enabling those outside the circle of actors to accumulate and assimilate certain elements, primarily visual ones into their own more hollow, if no less enjoyable aesthetic. Steampunk is only one example where there are certainly scores if not hundreds of others that one may simple have to explore in order to see. Each particular culture has its own story to tell, and so others may follow, but listening to a story is so different than stepping through the lifestyle.

Aaron Grierson is Senior Articles Editor for The Missing Slate.

“he is a blue child/ who came out of the sea/ in an orange dream…”
A poem against borders, by Usha Kishore.