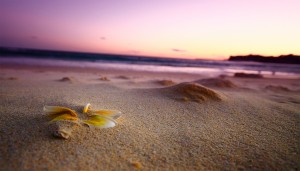 Roberto passed a joint to me with sand ploughed fingers

in the jungles miles above Limon while the others

did headstands inside between sips of wine

and rum from the bottles. Nobody talked

to Roberto – he was so beautiful

he stole your voice.

I didn’t want to kiss him, I wanted

to memorize how he shook shells

as small as pinky nails from his dreads

and how his hip bones protruded like fins. My father

says that the ocean will swallow

me one day, he said. The woven hammock

chewed into my bare thighs while he perched

and told me how he worked

his father’s banana plantation every morning.

The smoke filled my head as he rocked

and all I could picture between his rolling r’s

How his chest was chiseled

stone from the breakers. How the saltwater rutted

into him, shining off his shoulders,

even when the waters let him go, even

when his feet thrust into old Nikes,

even when it was time to weave

between the bushes, slipping

plastic soda sacks over one

Jessica Tyner is from Oregon USA, a member of the Cherokee Nation, and has been a writer for ten years. She currently works as a travel writer with Yahoo!, the entertainment columnist for Hound the Press, and a contributing editor at New York’s Thalo Magazine. She has recently published short fiction in India’s Out of Print Magazine and poetry in Slow Trains Literary Journal, Straylight Magazine, Solo Press, and Glint Literary Journal.  Her first novel has been picked up by Swift Publishing House. She enjoys teaching yoga and has a bad habit of collecting first editions.

“This is the opposite of dumbing-down. This is smarting-up…”
Robert Cottrell on Aeon and the proliferation of wonderful writing in the field of popular science.

B is for borborygmus...