Coraline is a bewitching and original film, released somewhat in the shadow of Pixar’s genre dominance. Drawn from a well-loved and successful children’s book, it is one of the more independent features that have followed in the turbulent wake of the mouse-financed giant. Its animation, however, is less smooth and glossy CGI, and closer to the spindly stop-motion eccentricities of The Nightmare Before Christmas. Its frames are full of texture; rough fabrics, cracked paint and splintered wood abound. These haptic touchstones, combined with the pulse of the sewing references, set the film apart as very much hand-crafted in the mould of skilled artisans, contrasted with the enjoyable but perhaps overly slick and self-aware Pixar features.

The story, too, harks back to older references than contemporary pop-culture, evoking a tradition of cautionary tales such as The Pear Drum, an English folk-tale. In that story, the children’s mother is transformed through their wickedness into a strange creature with glass eyes and a wooden tail. The tangled web of references to surrogate and impostor parental figures in children’s stories is an immensely dense one, and not to be picked apart here. The dynamics involved, of course, echo loudly in psychoanalytic chambers, where familial relations and notions of abandonment and independence clash in raucous Freudian analysis. Coraline draws on the legacy of fairy tales and appears to knowingly engage with many of Freud’s theories. Essays lurk in its composition when related to ideas of dreaming and the subconscious mind, of infantile complexes and the vicissitudes of psycho-sexual development.

In this snippet, however, I wish to consider a perhaps less famous, yet no less ubiquitous essay by Freud; his short investigation into ‘the uncanny’. 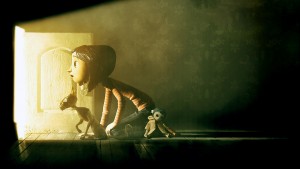 Whilst the theorizing here may not have made it so brazenly into the cultural consciousness, being somewhat less inflammatory at first sight, it underpins great swathes of the art produced in the last century, along with a specific yet undeniable section of the psyche.

The uncanny, or unheimlich, concerns itself with a certain aesthetic effect, a feeling engendered by particular triggers, more frequently utilised in art than encountered in life. It is an uneasiness rising from a kind of uncertainty, a creeping feeling quite singular in its disturbance. Freud considers it a fear of something old and familiar taking on a different aspect, the emergence of something that should have been hidden, an ontological uncertainty. It is often concerned with involuntary repetition, but gains its frightening nature from an atmosphere generated by the psyche of the observer. Strongly linked to childhood in its roots, we see the uncanny employed frequently in literature and cinema, and Coraline is steeped in its effects and tell-tale signs.

Dreams, reality and the slippages between these form a great part of the story. Coraline enters a mirrored world when she sleeps, a dream which tugs at the fabric of her life, threatening to engulf her. The wicked stepmother figure from fairy tales is the matriarch, tempting Coraline with treats as the gingerbread house drew Hansel and Gretel on. Coraline’s dreams begin to impinge upon her reality, first positively in the curing of her poison oak rash, but then more disturbingly as she begins to struggle to wake from this night-world. The uncanny can always enter when lines between dreams and reality blur, when the unconscious mind bleeds its symbols into the conscious.

The Newsroom has already received a lot of criticism for its portrayal of how the news is actually sourced and broadcast. People who work…