Robert Downey Jr. may very well owe Stan Lee for the resurgence of his career, as playing Tony Stark seemed from the get-go something he was born to do. This third film of the franchise, fourth if you count The Avengers (a film I wasn’t particularly fond of), does nothing to dissuade that notion. It is a good time in history, for perhaps the first time ever, to be a comic book nerd.

All that being said, I enjoyed Iron Man 3, feeling it to be a decent step up from the last attempt. This was mostly, I imagine, due to the creative process being under new direction, that of Shane Black, who had not directed a film since the cult favorite Kiss Kiss, Bang Bang (I love that movie). The new directorial step, allowed Favreau to have more fun (it seemed) in his role of Happy, to glorious comedic effect, and also allowed for less muddying of the intricate plot lines. 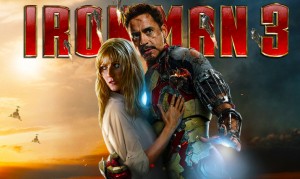 For the first time since Marvel started their unique endeavor to build a cohesive universe of franchise films involving different characters, with the occasional “Marvel Team-up” or “Avengers” movie to bring characters together, I got the sense of added depth from the material, since a large part of what Tony goes through personally in the film is a case of PTSD caused by the lingering effects of the Avengers film. This film also has a great villain, played by a great actor (Guy Pearce), and brings in one of Iron Man’s greatest foes, the Mandarin, played by the great Ben Kingsley. I have heard through the grapevine, or the internet pipeline I suppose, that many comic fans were displeased with the film’s take on the Mandarin character, but I felt it was not only an interesting bastardization, but also one that allowed for certain symbolism and topical metaphor that seemed to add a veneer of weightiness to the events transpiring on screen. Somewhere in there, something is being said about the power of the corporate war machine, and the way media is used to manipulate the public into participating. I liked that.

I also enjoyed the layers that were added to the character of Tony Stark. With his PTSD episodes being the focus rather than the alcoholism everyone expects from the comic book stories, the time he spends befriending a child he relates to on multiple levels, and the way he must cope with the powerlessness of finding himself without a functional suit, we get to see more of the human side of the character, something many super-hero movies forget to include.

And then there are explosions, surprise! Lots of explosions, and shiny robots fighting men made out of fire, pianos being thrown at helicopters, and a let’s not forget Gwyneth Paltrow.

What I didn’t like so much, were some of the pitfalls you come to expect from these types of films, clichés that creep into the genre so easily that they just feel as if they are meant to be there. For instance, the villain has a power so intense, that he should easily be able to wipe out a person in a metal suit. In fact, at one point in the movie, he uses his power on a “low bake” mode to force Don Cheadle out of his suit, as part of his evil plot. But later, when he is truly trying to kill the men wearing these suits, he just can’t seem to. This also happens on the reverse side of things. The villains have a regenerative capability, and routinely come back from the dead. They walk through fires, they get holes blasted through them, one even regenerates half his body, including half of his skull, but later in the film, Iron Man dispatches these villains with I suppose even bigger blasts of energy from his weapons, blowing even bigger holes in them. At one point he says, “Come back from that,” when all he had done was blow a hole through his chest, something we had seen the same villain live through a much worse example of earlier in the narrative. It’s a simple matter of continuity and logic, something the writers and directors hope we don’t pay attention to in the heat of the moment, and we usually don’t.

So, while I found Iron Man 3 to be an enjoyable romp through the routine fantasy world of heroes and villains, don’t expect it to linger in the brain more than thirty minutes after you leave the movie theater, much like the bits of candy stuck in your teeth.

A comprehensive and wide-ranging discussion of Sudeep Sen’s work, in conversation with Ziaul Karim.

Poem of the Week (June 4), by Mark Nenadov