Oxford University Press Pakistan’s Managing Director, Ms. Ameena Saiyid, has nearly single-handedly turned the country’s publishing and literary scenes on their head. Ghausia Rashid Salam writes about Ms. Saiyid’s journey and why being a woman in a man’s world has made all the difference. 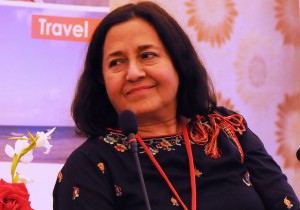 The publishing industry in Pakistan isn’t known for being risqué or taking chances, and though the country hosts a number of cultural events, including Pakistan Fashion Week,  they typically require much planning, otherwise they are doomed to fail, as was the planned film festival in 2009 that never happened. So when the Oxford University Press Pakistan (OUPP) successfully established the country’s very first literature festival, it just went to prove how culturally diverse the country is. And it was only fitting that its founder and OUPP’s Managing Director was a woman, considering Pakistan mostly makes international news for Violence Against Women (VAW) or tribal militancy.

Like most professional women working in a “man’s world”, Ameena Saiyid is no ordinary woman. Under her leadership, the publishing house has flourished. OUPP has established a name for itself not just through publishing, but also through various educational and literary programs.

Ms. Saiyid describes her initial experiences in a commemorative book published on OUPP’s 60th anniversary. She began her career at OUPP as General Manager a week before the death of Pakistan’s longest military ruler General Zia-ul-Haq which would, in ordinary circumstances, be difficult enough, but Ameena also had to contend with major opposition from colleagues and employees who felt a woman could simply never be qualified for a position of authority. It was unfortunate enough to join the publishing industry in Pakistan during a politically eventful era and to be confronted with a very old-fashioned mentality, which may’ve been out of place pre-Zia, was an unexpected hurdle. It had to have taken dogged persistence in the face of gender discriminatory opposition, receiving advice on how her home would not be blessed as a working mother, and knowing bets were being placed on how long she’d last, by people who may now be choking on their words – thirty-three years later, she’s still here.

As I sit across from Ms. Saiyid’s graceful eloquence, I struggle to suppress the urge to let out an embarrassing squeak of excitement. She speaks quietly, but with the confidence of someone who knows exactly who they are. My first question is something I’ve been wondering ever since I found out about the OUPP Museum and Archives: what purpose does it serve?

The museum, Ameena explains, was launched on November 6, 2012 on the OUPP’s 60th anniversary “to recognize our work in 60 years. It is a good way to celebrate.” And there is much to celebrate, apparent from the museum’s artifacts and the stories waiting to be discovered in OUPP’s history. OUPP, like the publishing industry at large, has always been a revolving door for talented individuals, some of whom are no longer in this world, and most people who aren’t industry insiders have no knowledge of the triumphs, blunders, and achievements of one of the oldest publishing houses in Pakistan. “In a way, we wanted to preserve our heritage, the work that we’ve done; to collect all the memories of those who have worked with OUPP,” she said, speaking of OUPP’s pioneers.

It had to have taken dogged persistence in the face of gender discriminatory opposition, receiving advice on how her home would not be blessed as a working mother, and knowing bets were being placed on how long she’d last, by people who may now be choking on their words – thirty-three years later, she’s still here.
Many of these memories have also been captured in the commemorative book published specifically for the 60th anniversary celebrations. The book is rich in pictures and details about the company’s history, from the extravagant lifestyle of the first manager which almost led to OUPP’s ruin, to the pet goat at their office at I.I Chundhrigar Road (or  McLeod Road as it was known then) in Badri building, as well as all the unforgettable personalities that served in various capacities, completing the tapestry of ideas and cultures that tend to unite under a single vision. The museum also utilizes an oral history documentary where all surviving founding members of OUPP discuss the company’s history.

But beyond serving as a repository for the publishing house’s history the museum provides a historical record of publishing throughout the world as well which, given all that’s happened in the industry globally, and the antiquity of writing and communication in general, would be hard to condense. OUPP has done it all in one exhibit. Still, some aspects slipped through the cracks, the most important of which is censorship, especially considering Pakistan’s political struggles and otherwise volatility, though perhaps it was exactly that characteristic that led to the omittance of censorship. The key motivation behind each exhibit seems to be making content and history accessible. “The best way to learn,” Ms. Saiyid explains, “is through case study.” Using OUPP as an example, the museum takes visitors on a trip down history, beginning from the discovery of paper, to initial forms of communication and eventually the evolution of publishing.

This is the Spring

"This is the spring I stop chasing love as if it were my tail..." By Kent Monroe