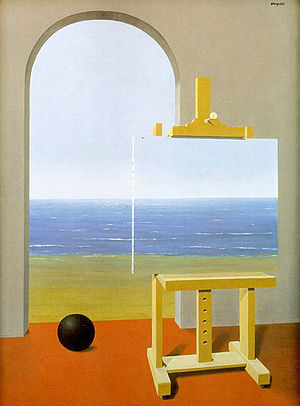 The Human Condition (1935), by René Magritte

How can anyone enjoy interpreting symbols?
They are ‘substitutes’ that are only useful
to the mind incapable of knowing the things
themselves.

The pear is not seen
As the observer wills.

Mysterium of the single object
sovereign in its haecceity,
symbolizing nothing
beyond itself.

So here an easel, cannon ball, canvas
depicting a landscape streaming
beyond a window frame,
asymmetry in the juxtapositions,
no apologies offered.

No false claims of imagined gestalt,
no Aristotelian resolution
correcting a brush’s bristles.

To walk in Magrittean shoes
is to witness strangeness
in both canvas and yourself.

Doug Bolling‘s poetry has appeared widely in literary reviews. He has received four Pushcart Prize nominations, has graduate degrees from the University of Iowa and has taught at several colleges and universities. He now resides outside Chicago in Flossmoor, Illinois.