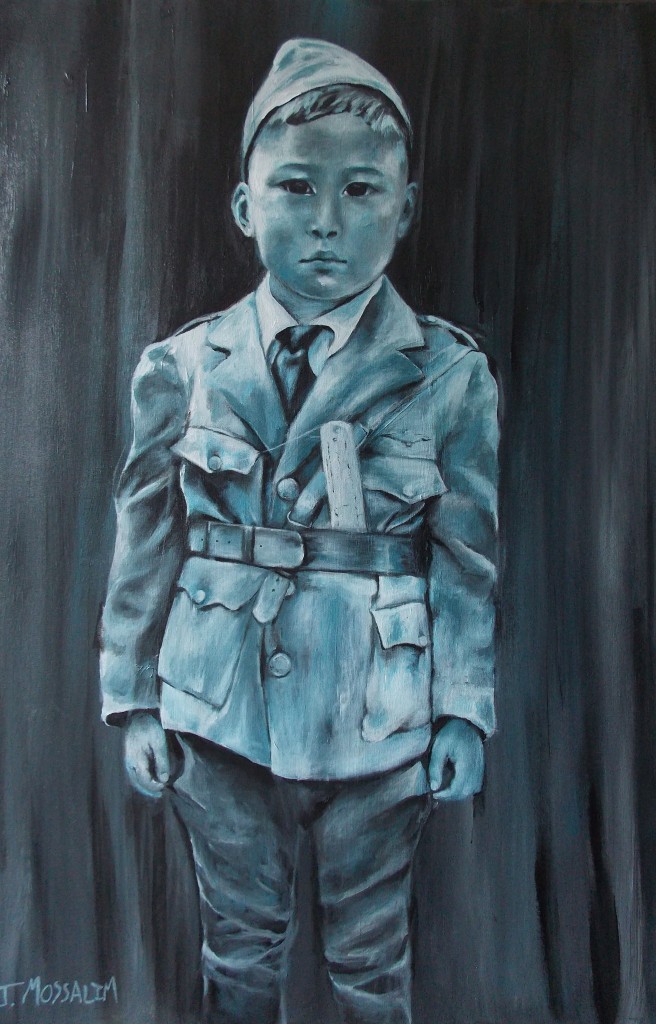 An American Boy, by Jihane Mossali

He’s holding a split star
in the black holes of his eyes,
unsmiling, gazing out
at the new world:
his small round hands
in the pockets of his shorts,
his dark hair brittle as a shoe-brush,
flat-toed Bata shoes shiny,
socks folded around neat ankles.
He is standing stiff like a pillar
before the rushing stream
of his rolling senses,
muddy meetings of rising waters
in the chaotic city.
Time in slow drops.
His mother is not with him
to lament the humming in the shadows
at the end of his boredom.
Bright light winces off the walls.
No one suspects this picture
will not fit daintily
into the spectrum of his family album.
A pattern is broken.
It is his last photo,
but the camera keeps clicking
every year without him
in the dark lens.

Mir Mahfuz Ali was born in Dhaka and studied at Essex University. He has worked as a male model and a tandoori chef, and as a dancer and actor. As a performer, he is renowned for his extraordinary voice  — a rich, throaty whisper brought about by a Bangladeshi policeman trying to silence the singing of anthems during a public anti-war demonstration. Mir Mahfuz Ali was the recipient of the 2013 Geoffrey Dearmer Prize, and published his first collection with Seren in 2014.

‘Boy in an Old Photograph’ first appeared in ‘Midnight, Dhaka’ (Seren, 2014), and is republished here with kind permission from the poet.

"Everything is stilled, when dancers/ stop and listen to the liquid gold..." Weekend poem, by Milton P. Ehrlich.