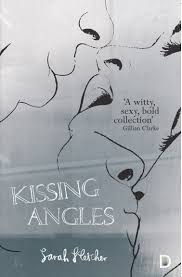 Early in Donna Tartt’s ‘The Goldfinch’, Theo and his mother shelter from the New York rain in the Metropolitan Museum of Art. Theo is ushered away from the ‘Art One-oh-one stuff’, towards ‘a particularly haunting still life’ by Adriaen Coorte. “Whenever you see flies or insects in a still life—a wilted petal, a black spot on the apple—,” explains Theo’s mother, “the painter is giving you a secret message. He’s telling you that living things don’t last—it’s all temporary. Death in life…. Maybe you don’t see it at first with all the beauty and bloom, the little speck of rot. But if you look closer—there it is.”

Sarah Fletcher has discussed her admiration for these ‘vanitas paintings by the Dutch masters’, and her first pamphlet, ‘Kissing Angles’, is haunted by the wilted petals amidst the beauty and bloom. At the centre of the pamphlet, a poem called ‘The Liebling’ narrates the story of a young couple: ‘The night we met, he took me dancing/ I was a page on fire, fully lit… and kissed him in the spotlight.’

The woman narrating the poem is quickly revealed to be Eva Braun; her dance partner is, of course, Hitler. She leaves the dancefloor with her ‘ballerina shoes’ soaked in her own blood:

…when I lifted my feet from
my slippers, they were bloodied: raw
as fresh-skinned fish from all my twirling
as we slid across the armoured floor.

This interest in reshaping and reclaiming narratives — finding voices for women who have been silenced by history — owes a little to Carol Ann Duffy: ‘The Matador’ and ‘Kraut Girl’ wouldn’t be out of a place in a darker rewrite of ‘The World’s Wife’, while ‘the thrashing, the feeling/ of being below the surface, the grabbing’ in ‘Lads’ recalls ‘Little Red Cap’ clinging until dawn to the wolf’s ‘thrashing fur’.

Occupying the space behind the lines more prominently, the familiar compound ghost of Plath and Hughes makes its presence felt in scattered images (in the drunken imagination of the matador, the wet clothes on the washing line become crows — a transformation which works for the ear as well as the eye), and in the pamphlet’s juxtaposition of beauty and violence.

The palette of these poems is dominated by reds and blacks (recalling, again, those vanitas paintings): the ‘widow-black linen’ to which the matador confesses his fear of death; the ‘Bible-black conviction’ (a hyphenated adjective on loan from Dylan Thomas) of the kiss in the final line of ‘The Judgement’; the ‘flapper-black’ worn by the speaker in the collection’s opening poem, ‘Visions of My Lover Dressed in Drag’; then the red follicles rising ‘like a fresh love bite’ after Kraut Girl’s head is forcibly shaved; Eva Braun’s red fur coat (and blood-soaked ballerina shoes); the apron, ‘white and red,/ like a roadkilled dove’ in ‘The Belle of New Orleans’.

‘Kissing Angles’ drips with blood and dark water — many of the poems have a bold and unsettlingly raw sensuality. ‘Lads’ presents a skilfully-sketched caricature of public schooled rugger-and-rowing ‘boys named Ollie… left to rehearse/ their deaths-by-water nightly/ with a girl they will call Easy’. In ‘Beach Combing’, ‘endless kissing feels like treading water’, and in ‘The Wrestler and the Sailor’s Daughter’, the wrestler ‘arches on her like a wave/ and, like a wave, above her, breaks.’

‘Kissing Angles’ drips with blood and dark water — many of the poems have a bold and unsettlingly raw sensuality.
In the hands of most other poets, some of this imagery would risk seeming overwrought or portentous, but Sarah Fletcher shows a sureness of touch and timing in alternating the pamphlet’s light and dark sides: it’s interesting to note that the title phrase comes from the poem that’s perhaps least characteristic of the collection as a whole, ‘Woman, 30, Seeks Orlando Bloom’ (the speaker wants Orlando to teach her, ‘please… which kissing angles/ are best for photos’).

Rather like a Shakespearian soliloquy, ‘… Orlando Bloom’ signals its moment of resolution with a jauntily-turned couplet:

…you must admit: we fit.
Orlando Bloom, come quick.

(It seems fair to suggest that similarities between Shakespeare’s soliloquies and ‘Woman, 30, Seeks Orlando Bloom’ begin and end there.)

A brief glance at the final lines of ‘…Orlando Bloom’ and the preceding poem, ‘A Villanelle with Two Endings’, should highlight both Fletcher’s versatility and the success of the light/dark tonal contrast in ‘Kissing Angles’.

‘A Villanelle with Two Endings’ works to undermine the children’s book simplicity of its own full rhymes (‘sing/ring/bring/spring’) and deliberate clichés (‘The sky is always blue’), and the dramatic darkening in tone between the light of the first line, ‘You hold my hand, and hold our child’s too’, and the gloom of the last, ‘The bleeding will subside. I leave the room’ is carefully controlled. The central rhymes of each stanza follow a steadily descending path from pleasure to pain: ‘We married in the spring… And in our garden, birds will always sing’, in the first two stanzas, turn into a ‘sting’ of pain in the fifth and ‘I snap like a string’ in the fifth and sixth.

Perhaps another poet would have lingered on pleasure a little longer — there’s a faint suggestion that pain is to be preferred to happiness as a subject for poetry — but the double villanelle is successfully complemented by the dark wit of ‘…Orlando Bloom’:

And I just know your world is better
than my own: where my husband leaves stickers
in the dinner’s aubergines and I am left
to peel the barcodes off with my front teeth…

Handling both tone and form so deftly so requires a great deal of talent, and — as Robert Peake points out in a recent piece for the Huffington Post —  Sarah Fletcher is that favourite cliché of the reviewer: ‘one to watch’. But one to watch with concentrated attention to what seem at first to be minor details: like those vanitas still lifes, ‘Kissing Angles’ holds most for those who look longest.

Film critic Jay Sizemore on why buying into the hype for Gareth Edwards’ ‘Godzilla’ reboot was a big mistake.

Author of the Month: Zoltán Böszörményi

"I could not give a clear resolution. I did not intend to do so. I did not consider myself a...