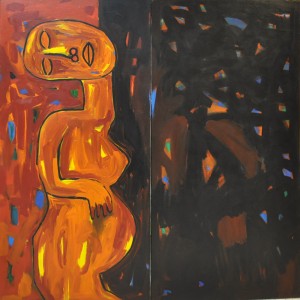 I Have No Space to Give Birth to My Baby by Meezan Rehman. Image Courtesy: ArtChowk Gallery.

The light is fading in the room and I stop reading my book to gaze outside the window.  Another day and another sunset. This time the fusion of oranges, pinks and blues is worthy of an artist’s canvas. If only I could paint, I would immortalise this moment. Sadly I am no artist so my memory will have to suffice. A few moments and then dusk starts to fall on the world outside.

Despite the overhead lights, the room feels dim…rather miserable if you ask me. I reach over and switch on the light by the bed. It flickers momentarily then comes on. I look at the face resting on the pillow and the harsh glow of the artificial lights give him a greyish pallor and the tubes emerging from his mouth and nostrils obscure part of his face. He is barely recognisable with the purplish bruise around one eye and gash across his forehead.

His eyes are still closed. They have been closed for over a week now. After the car accident the doctors decided to put him in a medically induced coma. They told me that his head injury was severe and there was swelling in the brain. According to them, this was the best way to let his body try and heal although from what I can tell they think the chances of him regaining consciousness are slim.

A fumbled encounter in the back seat of a car with a man who swept me off my feet gave me one of the best things in my life—my son.

It was disconcerting at first but over the last week or so I have become accustomed to the noises the various machines surrounding my husband constantly make. The rhythmic beeping from his heart monitor, the whirring of the ventilator—it’s all background noise.

I stand up and the book on my lap falls to the floor with a slight thud and slides under the bed. I can pick it up later. One of the nurses said that talking to him or reading out loud might help so I bring a book with me to the hospital.

My lower back and shoulders are aching from all the sitting but even with a bit of stretching and walking around the room, the pain remains obstinate. Give it time and your body turns on you and things you take for granted become herculean tasks. Everything starts clicking and creaking like an unoiled machine. Right now I feel more like a hundred and five than fifty five.

The hands on the clock above the door of the room are moving particularly slowly today. I think the clock is mocking me. Even the seconds seem to be moving in slow motion. “Ha ha ha, only six o’clock,” it says.

Two more hours and I can go back home.

Even after thirty five years I can hear my mother’s voice telling me that I had made my bed and must therefore lie in it. I was foolish, immature and oh so stupid to have been seduced by a few sweet words and a roguish smile. I have no one but myself to blame.

A fumbled encounter in the back seat of a car with a man who swept me off my feet gave me one of the best things in my life—my son. However, back then people didn’t look kindly on unwed mothers and I thought I was the luckiest girl alive when he said we should get married and be a family.

“No child should come into this world without having both parents”, he used to say.

My second son came soon after the first and I felt complete. I had everything I wanted.

Unfortunately time taught me that the man I had given my heart and soul to didn’t really love me. I just kept deluding myself into think that he did.

Well, two more hours and I can go back home. I can breathe. I feel like I have more than paid my dues by now.

At least the boys will be here soon. ‘Boys!’ I smile to myself. They stopped being that years ago. They’re grown men now with their own families, their own lives. Despite the fancy suits and manicured beards all I see are two little kids who used to show up from school with scraped knees and elbows and spend hours fighting imaginary dragons and monsters. How I miss them.

I can understand that it must be hard for them to take the time every day to come by the hospital but they do their best and visit even if it’s for a little while. Come seven-ish, they appear and take it in turns to sit with their father. We’re not all allowed to be in the room all at once. So I chat with one or the other in the waiting area. Sometimes about the weather, at times a little about their work. I ask for an update on the grandchildren whom I haven’t seen since before the accident. More often than not they ask me if I need anything for the house or if my back is giving me trouble and then they leave. It has become a little ritual we go through but it’s one that I look forward to.

At least the two of us seem to have done something right.

All of a sudden the machines start going mad. I see his large frame shaking uncontrollably and I shout for the nurse. They are already in the room, the beeping and screeching of the machines have them running to the bed.

Somebody gently pushes me out of the way and out of the room. They are yelling things at each other and I don’t know what they’re saying. I see the doctor and he enters the room without even looking at me. I’ve seen him around the ward. He has a nice bedside manner, at least nicer than the doctor who was here last weekend. This one reminds me of an aging cherub.

The door closes behind him and I can’t hear what’s happening inside anymore.

Poet of the Month: Chelsey Harris