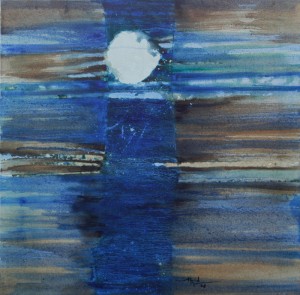 It was complicated. First, she scraped the leftover food into the bin. Then she rinsed the plates and cutlery under the tap. Then she placed them one by one in a bowl of hot, soapy water and scoured them clean. Then she heated more water and poured it into the sink with two measures of detergent and again washed plates, spoons, knives and forks. Finally, she rinsed the dishes and the cutlery and left them to drain on the stone counter top.

Her hands felt rough, she was tired of being on her feet and her back ached a little.

Within herself, she felt a great sense of cleanliness, as if, instead of washing dishes, she had been washing her soul. The bare lightbulb made the white tiles gleam. Outside, a cypress tree was swaying gently in the balmy summer night.

The bread was in its basket, the clothes in their drawer, the glasses in the cupboard. The hustle and bustle and tumult of the day were over.

Peace reigned. Everything was in its place, and the day was done.

And Joana walked slowly through the house.

She opened and closed doors as she went, turning lights on and off. The rooms disappeared into darkness and emerged from darkness into light.

A sweet, unquenchable silence hung in the air.

The silence defined walls, covered tables, framed pictures. The silence carved out contours, sharpened edges, deepened spaces. Everything was palpable and alive, dense with its own reality. The silence, like a deep tremor, ran through the house.

The familiar things – the wall, the door, the mirror – each in turn showed their beauty and serenity. And the June night showed its starry, expectant face at the window.

Joana walked slowly round the room. She touched glass, whitewash, wood. Everything had long since found its place. And it was as if that place, as if the relationship between table, mirror and door, were the expression of an order that transcended the house itself.

The things seemed somehow attentive. And the woman who had washed the dishes was seeking the focus of their attention. She had always done so, but it seemed for ever out of reach.

Now the silence was even greater. Like a flower in full bloom, every petal unfurled.

And orbiting this silence were all the stars and planets, whose imperceptible movement embraced the order and silence of the house.

The silence defined walls, covered tables, framed pictures. The silence carved out contours, sharpened edges, deepened spaces. Everything was palpable and alive, dense with its own reality. The silence, like a deep tremor, ran through the house.

Joana touched the white walls and breathed gently. There lay her kingdom, there in the tranquillity of that nocturnal contemplation. Out of the order and silence of the universe a limitless freedom arose. She breathed in that freedom, it was the law of her life, the sustenance of her being.

The peace surrounding her was open and transparent. The shape of things was a calligraphy, a script. A script she recognised, but did not understand.

She crossed the living room and leaned on the sill of the open window, the pure blue moment of the night before her.

The stars were shining, distant and yet somehow intimate. And in her mind there had always been a bond between herself and the house and the stars. It was as if the weight of her consciousness were necessary to keep the constellations in balance, as if a great oneness suffused the whole universe.

And she inhabited that oneness, present and alive in the relationship between those elements, while that same ever-attentive reality sheltered her within its vast, intense presence.

She leaned out of the window and rested her arms on the cool stone sill.

A light breeze rustled the branches of the cedar trees. From the river came the hoarse cry of a ship’s horn. In the tower, the bell tolled twice. It was then that she heard the scream.

A long scream, shrill and wild. A scream that penetrated the walls, the doors, the living room, the branches of the cedar trees.

Joana turned away from the window. There was a pause. A brief, hesitant moment, still and tense. But then more screams pierced the night. There was someone out in the street, on the other side of the house. A female voice. A naked, lost, desolate voice that became more and more distorted and disfigured, until it was transformed into a howl. A hoarse, blind howl. Then the voice wavered, fell away, took on a sobbing rhythm, a mournful tone. Then it grew louder, angry, despairing, violent.

The screams sliced through the peace of the night, leaving a monstrous gash, a wound. Just as water begins to gush in through a breach in the hull of a ship, so now, terror, disorder, division and panic rushed through the wound the screams had opened, flooding the house, the night, the whole world.

A Brief History of Bangladeshi Writing in English

"How can we categorise this tidal wave of English writing in non-English speaking countries? Can we call it English literature?...