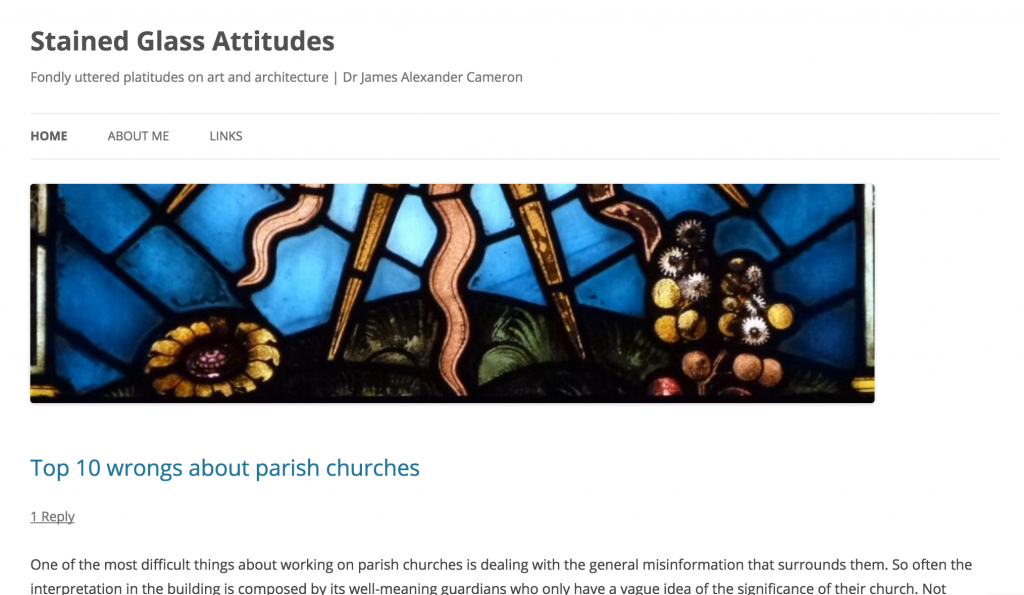 Lots of bloggers dazzle me with their fluency. Even if blogging were my full-time job and I had had a four-figure IQ I couldn’t imagine covering the ground that Tyler Cowen does at Marginal Revolution, or that Andrew Sullivan did on the late lamented Daily Dish.

But there is also a special place in my heart for the bloggers who pop up with a glorious new post  just when I’ve forgotten they were ever there, or when I’d feared that the blog had gone dark. When I see something in my RSS reader from Xavier Marquez on political science, or Fuchsia Dunlop on Chinese food  I am as surprised and as joyful as David Copperfield must have been when he found Mr Peggotty on his doorstep, back from Australia.

I suspect James Alexander Cameron of writing five or six pieces a year at Stained Glass Attitudes, but at highly irregular intervals in order to confound any expectations. The quality is perfectly maintained at a level somewhere around the celestial. Each note is a work of art crafted to outlast the centuries. Cameron does write mainly about stained glass, but lest that might overwhelm the reader with too much excitement, he broadens the discussion to take in other aspects of medieval church and cathedral architecture.

The quality is perfectly maintained at a level somewhere around the celestial
It’s expert stuff without any of the reverence or pomposity that you tend to get with expert stuff, at least in architecture. Cameron has the blogger’s eye for zeroing in on what other people get wrong and explaining how to get it right. Here he is, for example, on Crusader Tombs, (from Top 10 wrongs about parish churches, which is my sort of listicle)

“The main story with these is that if a knight has his legs crossed, then he died in the Crusades. This is, of course, a load of rubbish. The reason effigies have their legs crossed is because they look pretty silly with their legs straight, as if they’re lying in bed, depressed and not wanting to get up and go to work. With their legs akimbo they look ready for action. It’s not a special cipher ready to be decoded.”

And here he is, from the same post, debunking the tendency of English parish churches to claim a stained-glass window by Sir Edward Coley Burne-Jones:

“Burne-Jones was a prolific designer for Morris and Co. The firm kept pumping out poor-quality versions of his cartoons well into the twentieth century after anyone connected with them in their heyday was long dead. Unless it’s an early, bespoke piece of work, it’s very unlikely Ned saw the piece of glass, let alone visited the church. In most cases, claiming your glazing is by Burne-Jones is like saying you often host concerts by Bob Dylan because you have a 1992 CD remaster of Blonde on Blonde”

I hope this is enough to persuade you that you can enjoy Stained Glass Attitudes without ever setting foot in an English parish church, let alone having an opinion about stained glass.  Cameron has the gift of holding your interest on a subject about which you knew and cared little hitherto, which is the sign of a top-flight critic. It’s fun and you learn stuff. Instead of being the know-it-all who explains that the crossed legs signify a Crusader’s tomb, you can be the know-it-all who waits for somebody else to trot out that story, and then debunks it. Does life hold any greater pleasure?

“Each day is not like this: Her edges showed sharp/ as diamonds one Tuesday before Wednesday dark/ pulled her from rain and dropped her in a car.” Poem of the Week (April 15), by Mark J. Mitchell.

The Know-It-All Who Didn’t