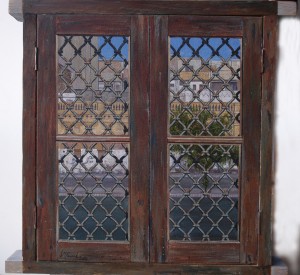 In 1919, Klaus Bruner was born in a blue-collar area of Berlin. His father made a good living as a construction worker. When Klaus was nine, however, his father’s boss was using shoddy materials that caused his father to fall through a floor while on a job. The accident severely injured his back. Before his injury, he was a cold and distant father who doled out the occasional hope-igniting scraps of affection and kindness to his son. After it, he became a drunken, unemployed wife-and-child beater who constantly ranted about the Jew boss whose obsessive penny-pinching had caused the accident that had destroyed his life and turned him into a “cripple.” Klaus’ mother was always kind to him, but she was too weak-willed to defend him against his father. Though his mother was able to obtain employment as a maid and he earned money doing odd jobs around the neighborhood, the money they made only paid for the barest necessities. Klaus began to be teased and then eventually bullied at school for his shabby clothes. Though he did everything he could to contribute to the family’s support, his father started threatening to send him to an orphanage if he didn’t pull his weight.

It was with that threat behind him that at age eleven, Klaus sought out the husband-and-wife owners of a new neighborhood tavern and asked if he could work as a dishwasher for them. The couple, Werner and Angelika Amsel, agreed. They had a pair of twins Klaus’ age, Helmut and Uta, who became fast friends with Klaus, and soon the Amsels became a surrogate family to him. The year before, the Amsels had enrolled Helmut in the junior branch of the Hitler Youth and Uta in its sister group and the children loved it. They convinced their new friend to join and he did. It was unsurprising that his father’s boss had been a Jew, Mr. Amsel let Klaus know. His father had been right. Jews’ greed knew no bounds. Even if it meant endangering the very men who sweated for them day in and day out.

Like Helmut and Uta, Klaus loved the Hitler Youth. He loved everything about it—from its uniforms and flag to its physical and military training. But most of all he loved the dream. The dream that if its members worked hard enough, if they were devoted enough to the group, they could become true Aryan supermen. It was even better because his best friends were striving for the same goal. Before joining, he had already felt that the confident, cheerful, attractive twins had brought him into the realm of their own enchanted specialness. Once they pulled him into the Youth, however, the realm expanded.

At fourteen, Klaus and Helmut transferred to the true Hitler Youth. Klaus learned that his three-year crush on Uta was requited and they began dating. At eighteen, they married and conceived a child. But no sooner did they learn Uta was pregnant than Klaus was laid off from his factory job. Unable to find employment in a country that had yet to fully recover from the Depression, they knew that many unemployed Germans had been successful in finding factory work, higher paying factory work at that, in America, so they decided to emigrate.

They settled in the German immigrant area of uptown Manhattan named Yorkville and Klaus got work in the meatpacking district. In 1938, Uta gave birth to a son the couple named Robert, pronouncing the name Rowbeart in the German style. Soon after, a neighbor recruited the Bruners to the local Bund.

The following year, just as war was being declared in Europe, the Bunds ended. Soon after the bombing of Pearl Harbor, Klaus and Uta were arrested.

This was how the couple and their four-year-old son came to reside in Camp Crystal in Texas, one of several internment camps across the country imprisoning Germans, Japanese, and Italians. Though only Germans who were considered a danger to the country were interned, the flimsiest of evidence could deem a German a danger, particularly if he or she wasn’t an American citizen. The Bruners weren’t citizens and were part of the tiny 10 – 15% minority of their fellow German internees who had actually been in a Bund.

The camp wasn’t so terrible, considering they were prisoners. It was largely inmate run and the children got to go to a camp school whose curriculum was the same as the normal public school system. (Robert’s internment was “voluntary” as they neither wanted him sent back to war-torn Germany to live with relatives nor to become a ward of the state.) This did not mean that the couple wasn’t afraid, like many of their peers, that they would be “repatriated” to war-torn Germany. So while many of their fellow ex-Bund-mates tried, often successfully, to convert the non-Nazi Germans who made up most of the German population of the camp, they were careful to keep a low profile.

However, their fears were realized in 1945 when they were informed they were to be sent back to Germany. They were given the option of taking their eight-year-old son back with them, but they didn’t want him to have to return to the desolate country to which they knew they would be returning.

Robert was sent to a boys’ orphanage in the state. The nun who ran it, Mother Agatha, called him “Nazi boy,” a name quickly adopted by the other boys who bullied him even more ruthlessly than she did. On his first day at his new school, his teacher was taking roll call when a student named Robert told her he went by Bobby. When Robert was called a few names later on, he said that he too went by Bobby.

Cathy RosofffictionStory of the Week

"I really wanted to argue with Houellebecq, so much so that I had to scribble little notes in the margins...