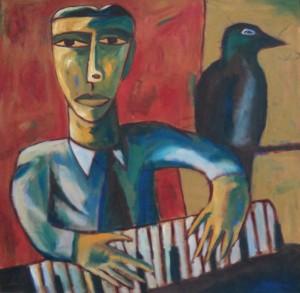 I prefer not to, his mind’s newborn thought slash reply came into being and vanished like the swirling steam that threaded its way up from his cup before he could speak. He could swear he’d smelled coffee even though he knew they’d gone off it five or six years ago jointly deciding that it simply did not go well with cardiac matters of the heart and hers had severely weakened with time. He sipped the tea too hot for his by-now-atrophied tongue to feel the sting, not even a slight tingle, and gazed past the table through the empty vase that her body seemed to frame. There she was in front of him, this amorphous block of flesh that once bore the glass ornament’s curvy haptic invitation. He never pictured they’d grow old together. He never thought they’d grow old. They just made it here with their personal common baggage the way one arrives on a long awaited holiday.

She had aged with grace despite the now curve-less features of her body with him to witness every change not as it happened, but always retrospectively if at all. They would look at pictures from their youth a rare amusement often accompanied by a soft sigh on her part and the maudlin realisation that she was “not young anymore”. He couldn’t care less – he was grateful she was still here, in any form, just here with him. Small things that others perhaps even a younger him would have easily qualified as pet peeves were now anchoring points of reassurance: her intensifying offbeat breath after a short walk, the way he had to bring his still-jaunty pace to a halt for them to be in sync or the nagging quality of her impatience generally directed at him were all part of a canvas he wouldn’t have dared himself to look away from for fear it would disappear. She kept him alive holding his attention the way gravity holds one pinned to the floor allowing for infinite potential purpose.

He never pictured they’d grow old together. He never thought they’d grow old. They just made it here with their personal common baggage the way one arrives on a long awaited holiday.

Traces of her younger self were still there albeit hardly visible like the small and fragile vase against her imposing frame. There was a time when he could circle her waist with one arm making her stand on just her big toes her lips drawn to his in a magnetic pull – a time from a lifetime ago with another her and yet another him. Their children had grown out of her and despite his paternal gratitude he was even more grateful to have her all to himself once again.

He can’t really remember at what point he started calling her Mother an appellation infused with reverence and recognition constantly redefining itself like the taste of an aftertaste. She was not his mother and he didn’t mean it as the mother of his children, just…Mother. A different sounding, uniquely reverberating use of mother so unlike the mother he used to call his own mother more like the expression of the primordial womb-soothing feeling that precedes conscious language. She had seen him cry not the way one sees salty colorless beads drop out of one’s eye but transposed expression transfixed with pain at the loss of one’s first born or following the exhaustion of rummaging one’s self for a sense of self-worth or burdened by the unforgiving reality of one’s perishability with its shameful weak streak.

She leaned over the table her eyes more grey than blue carrying the flicker of her restlessness accusingly demanding, some sort of non-aural simile for her once leg tapping cue, and raised her eyebrow in anticipation. He took another sip of tea seemingly oblivious but fully rejoicing the moment like an all-too-wise child bestowed with the awareness of a lifetime of experience enough to know that it’s in moments like these that one lives. He contained the deafening tocsin of his inner joy and set down the cup.

Do you ever feel nostalgic?

L. Haiman is a Romanian-born-Edinburgh-schooled-London-based writer whose work has appeared in the short story collections Garlic and Sapphires, Two In the Bush, and literary magazines Anything Anymore Anywhere and PublishED. L. Haiman is also an ongoing collaborator of illustrator Via Fang.

fictionL. HaimanStory of the Week

“Lately, I am told, in my native land, mothers stay up long into the night staring at all of the dark…” Weekend poem, by Zainab Syed.

A Buddy Old and New

"Doorbells rouse excitement in the haves, while the have nots grumble at the disturbance." Vincent J. Fitzgerald tells a simple...